We wanted to make an application, because in a sense, that’s what we’re doing. But didn’t want to post it in the current Mithlond thread either.

We went into this discussion knowing that. While we would love Wheellee’s help in planning, we wanted to assist to the point of where he wouldn’t have trouble finding people who want to carry out the plan moving forward. We probably could have placed this document anywhere, even in the Mithlond thread itself. But none the less, this was our thoughts and felt it needed to be put out to public discourse in a manner that was was as respectful as possible while offering our perspective and potential supervision, either with the help of Wheelle or under his direct leadership if that’s what the community wants.

Certainly would need to.

I need to see a more detailed overhead plan rather than just outlined sections. If you could label where all the professions are going to be placed and which buildings you intend to move/delete that would be better.

We will sit down whenever we have the chance and create a more detailed plan.

Great, I look forward to seeing it.

I’ve already told @Daktubalan this, but I want you guys to produce an annotated image that shows your plans, not just wool and signs on the server.

We will get together tomorrow when all three of us are on and do that for you. Hopefully we can present it in the later evening

Thanks for keeping us posted.

Here is the plan for South Mithlond as requested 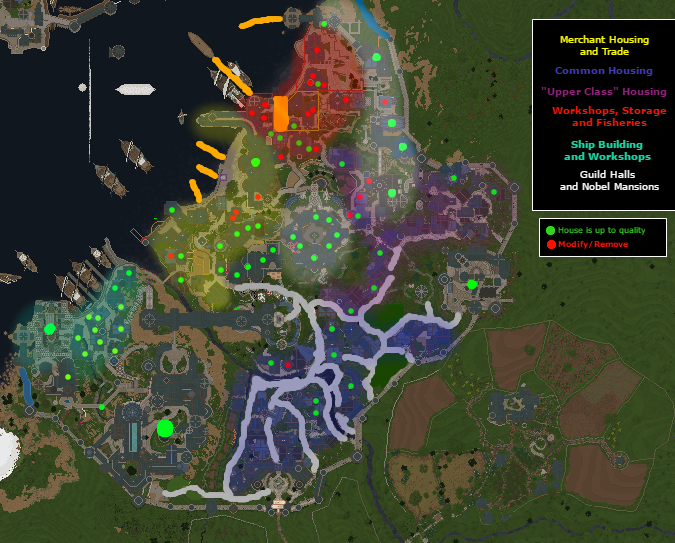 Will there also be residential aspects to the areas next to the harbour? Perhaps above the businesses themselves?

Depending on the business, yes. It’s just not marked on that picture because we mark it by primary purpose.
Is it good enough for a game plan, or do you want something added?

Would you be able to implement a system similar to Harlond? Ie redstone blocks to indicate houses that will be abandoned ect, will help to bring some continuity amongst the projects.

Possibly, right now we use Redstone blocks for a different indication, but I’ll talk with my fellow projects leads to sort something out

I noticed, however, it would be much easier if we used the same blocks throughout the server.

I agree, but I’ll need to talk to my fellow project leads first so we can maintain a structured system. I’m not saying no, I’m simply saying that I’ll need to communicate to the team before making big changes. You will more than likely see the change today, or in the next few days.

The exteriors for the area where Frodo leaves middle earth are now officially complete. We are making good progress on the next dock section, which we expect to also be completed very soon.