Grey Ships:
“[the] Tower Hills… look [west] towards Mithlond in the Gulf of Lune where the grey ships lie.”
The Two Towers, LoTR Book 3, Ch 11, The Palantír
2 Cities:
“Upon the shores of the Gulf of Lhûn the Elves built their havens, and named them Mithlond; and there they held many ships, for the harbourage was good. From the Grey Havens the Eldar ever and anon set sail, fleeing from the darkness of the days of Earth; for by the mercy of the Valar the Firstborn could still follow the Straight Road and return, if they would, to their kindred in Eressëa and Valinor beyond the encircling seas.”
The Silmarillion, Of the Rings of Power and the Third Age
Gates and harbour:
As they came to the gates Círdan the Shipwright came forth to greet them…
Then Círdan led them to the Havens, and there was a white ship lying, and upon the quay… stood a figure… awaiting them…
[the] sails were drawn up, and the wind blew, and slowly the ship slipped away down the long grey firth; and… went out into the High Sea and passed on into the West…

The Return of the King, LoTR Book 6, Ch 9, The Grey Havens This is the general plan. There will be a road leading under the bridge, and the tops of the hills will be lined with large manors and palaces, while the lower areas will be generally dominated by shipyards and profession-related buildings. About half of the buildings will probably be empty due to elves departing for Aman in the Second/Third Ages.
Blue: Bridge
Tan: Road
Brown: Palace (these are rough location)
Grey: Docks and Shipyards
White: Walls
Blank space inside city: Filled with manors and houses and other stuff. 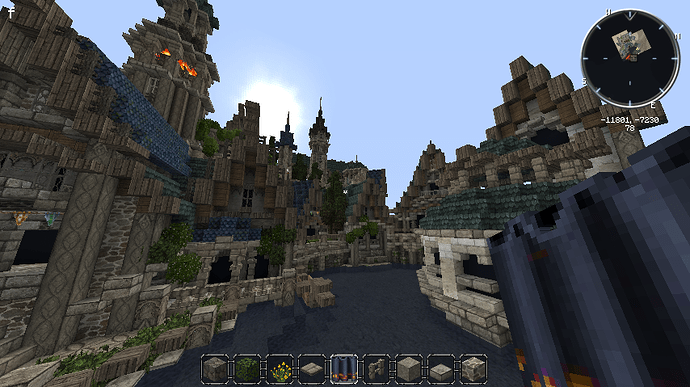 Just an idea for small canals and stuff, but the houses will overall be much larger and grand than shown here.

The next Mithlond Build Day will be on Saturday the 11th of June.

Upcoming saturday we’ll try to finish another few sections of North Mithlond. I’ve marked them in the image below. 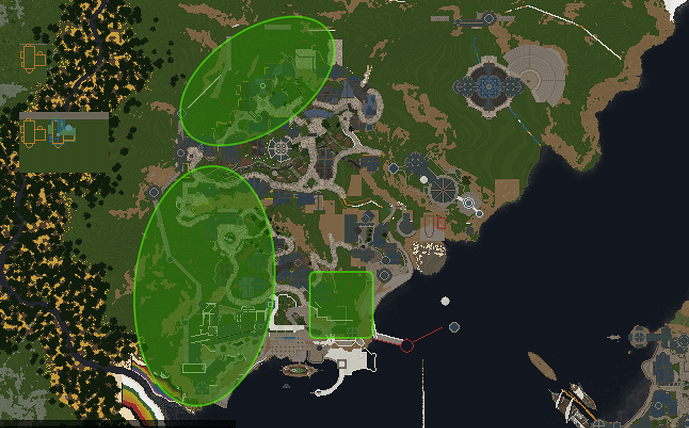 Detail needs to be added to the area in between the gate towards Forlond and the lighthouse. This area needs two or three houses and some farmlands as it’s on the southern side of the hill. The big building complex to the south has been layed out for the bigger part already, and can be finished by just about anyone. It has a lot of smaller courtyards which can be great fun to detail. For the northern area more wall sections should be pasted in by someone with worldedit. Kingorrik has been so kind as to make a headstart on that already, so there’s only a few gaps that need filling still.

The northern section will be mainly houses and have another big building complex, maybe an observatory. The box in the bottomright is a location where Kemce will be adding another monumental build, or eyecatcher. Help him out if you like.

I really can’t make it this saturday as university is keeping me tied down, which is why Atlantispy will be there to play disciplinarian. When you have a nice idea for a particular (empty) spot, don’t hesitate to build it.

Look at the map and realize how quickly things are going!

Before I make the post, I’d like people to know I’ll be in and out of leading Mithlond throughout tomorrow. If atlan or king could take over whenever I’m away that’d be appreciated.

PRKdF6g.png854×480 694 KB
We will be doing the road connecting the north gate to the current section, and the adjoining buildings/side roads. It’s supposed to be mainly housing and gardens, similar to the current section, but it might be nice to have perhaps a tower or two, or even a small library (perhaps?). Anyways, see you tomorrow!
2 Likes
wheellee 24 June 2016 22:46 #6

Oh and we’ll be doing the observatory as well tomorrow, if people get bored of doing regular houses or if they finish them entirely :).

Hey everyone, I hope you’re already enjoying summer -or maybe just your weekend.

Tomorrow is another build day. The weather here is shit so I’ll probably be working on Mithlond myself for the bigger part of the day. I´ve marked the area we´ll be working on in the image below. It would be nice to see the server fairly populated again; So even if you really really don´t feel like helping out on Mithlond, you can still come online to hang out for a bit. The more the merrier. 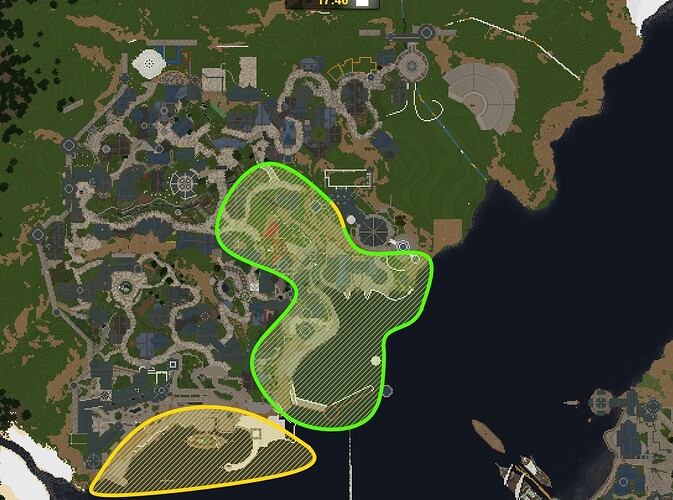 We need to add some smaller storage warehouses along the sides of the cliffs, maybe even partially cut into the rocks. It would be nice to build a small customs office somewhere as well. More to the interior of the city a park needs to be built, and a few houses. I´ll be adding more layouts later this evening and tomorrow morning. And again, when you have a good idea for a particular spot, don´t hesitate to make it reality. Especially for the docks area I hope some of you can come up with clever inventions.

Final note, the green area has slightly more priority than the yellow.

Reminder that there’ll be a build day this weekend. Get planning, leaders! 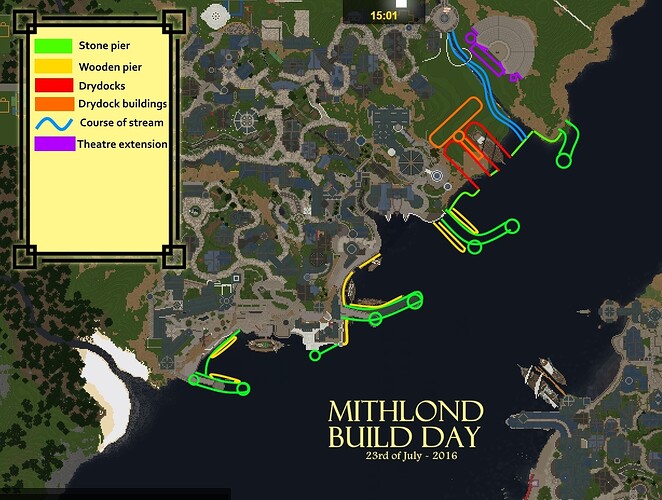 Will do some outlines later this week

South: This simply involves finishing the current farmland there, and decorating the fields to look overgrown. There’s also a village near the bridge where you first cross into the farmland from the heaths.

North: Not much is done, but here are some suggestions:
-try make it a mix of stylized garden land (like by the gate), woods, and farmland.
-some scattered buildings such as a potter’s for roof tile making or quarries for city rock would be nice
-windmills on the ridges
-can have terraced farmland and maybe even a village or two.
-make sure to make it seem like nature is creeping up on the farmland, so it isn’t too neat 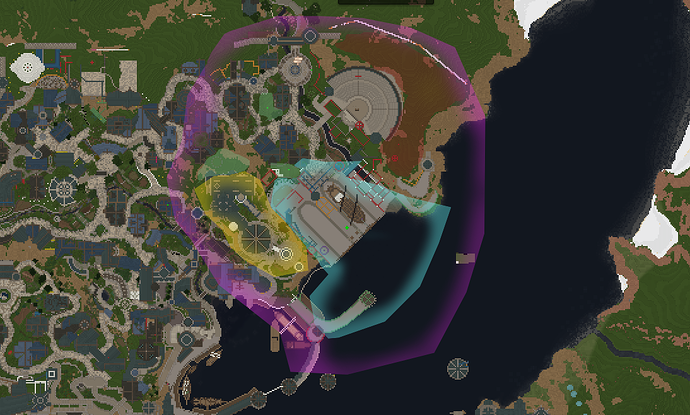 Blue: warehouses, canals, and docks. It would be fantastic if the dry dock +surrounding warehouses and canals are finished first before moving onto other stuff.

Green: Gardens, these should be top priority as well, as they’re easy things to do and don’t take much effort compared to the houses/meeting hall. Note: The garden near the dry dock with the red layout next to it is supposed to be a food garden with a shed (red layout is the shed)

Red: Mansion stuffs, look at the east ridge of southern Mithlond for inspiration. Should have plenty of terraces and maybe even a stair down to a private balcony overlooking the sea below.

Yellow: Meeting hall. I’m not asking too much regarding it, but if someone who likes to do towers can finish up the 3 wool towers left there that would be fantastic.

-Any unfinished stuff within the section is also fair game after the warehouses/docks are completed. The curved building to the east of the fountain courtyard is a stables or something like it.

One problem that might come up is I need someone to lead it for me. I will not be here from 3 PM GMT (close to when I wake up irl) to around 12 AM at night for Europeans. This means I will most definitely miss most of the build day. If anyone is willing to take over for me for Saturday it would help tremendously

.
I’m excited to see what progress goes down Saturday!

Hope to see as many of you as possible there. This is the final section of the city that’s largely unfinished - let’s not slow progress now!

I guess I should have written this some time ago. I am stepping down as co-leader of Mithlond in order to avoid a total minecraft burnout. Being responsible for a city of this size where everything has to be perfect is a pretty heavy load. The good news is that I’ll happily help out with all the settlements in Harlindon. Seriously love to build houses or whatever else, as long as it’s not too big. This leaves @wheellee without a companion however; so if anyone thinks he would make a nice addition to team wheellee, contact him

Well done for coping with wheellee for so long, not many people could have.

It helps when you’re both full-fledged autists

The Mithlond build day is now going to be on Sunday, and King will be leading it. It is the same area as before plus a few new things for the people that want it. Wall schematics are in the South Mithlond farmlands, and a builder plus has enough time/will power (concepts/freebuild is not valid excuse

) to past them in and finish the North Mithlond wall would be recommended to do that. People are also recommended to go back and find unfinished buildings/areas in the other parts of North Mithlond to work on once they finish at least 2 things (theatre, gardens, etc.) in the recommended section. Theatre should be a community build and everyone should try pitch in. Enjoy!

Professions for Mithlond A list of the professions in Mithlond that will need specific buildings, stalls or rooms to represent them. The elven ‘nobility’ would engage in some of these professions too (artist, shipwright, smith, etc), and thus would... 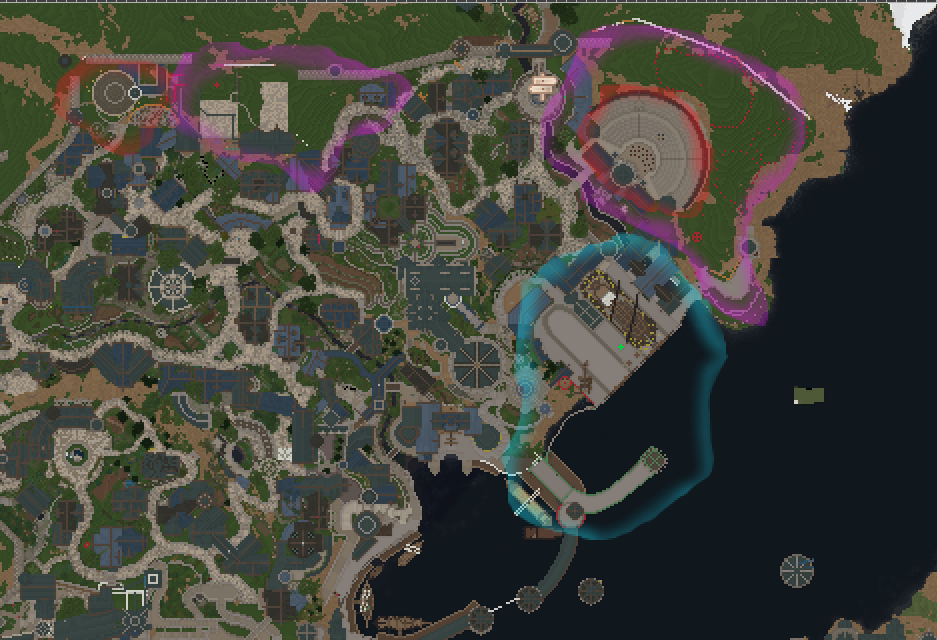 Firstly in the build day it would be great to get the observatory and its garden completely finished, and the theatre (just needs editing wall wise and to have a walkway that makes sense at the top). Secondly, as you ca see on the map, there are two pink sections. I will detail them later today with wool outlines, but they will mostly be Guild Halls and mansions (movie style), with a bath-house on the western outline. Look to the cliff mansions on the east side of south Mithlond for inspiration on how to do those and how to make them look good. 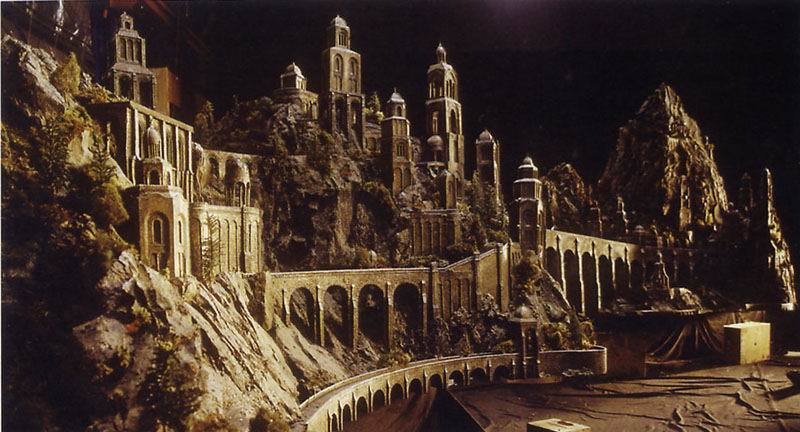 Of course, it’s impossible to do the cliffs/altitude, but pulling designs straight out of there is encouraged (albeit edited to fit with the style and be proportionate with the area).
King will also hopefully be online at points during the build day. If I am not here look to him for direction.
It would be appreciated also if a builder plus would finish the walls using the schematics above the farmland of south Mithlond.

Thanks so much for your help so far, just a final push and all your hard work will pay off!