Lore: No lore from books, village will be primarily agricultural, though it will also be a small trade center as it connects Forlond to the rest of Forlindon. It has been abandoned for approximately 50-70 years. Most of the village and farmland was owned by a rich family who lived in the central mansion at the peak of the hill. the immediate country side is surrounded by abandoned farmland and forest.

The house in the upper right in striped yellow is (as long as it’s fine with Fornad) un-abandoned, owned by the caretaker of the mansion and it’s grounds. He stayed after the family and village left continuing to look after the grounds of the mansion. 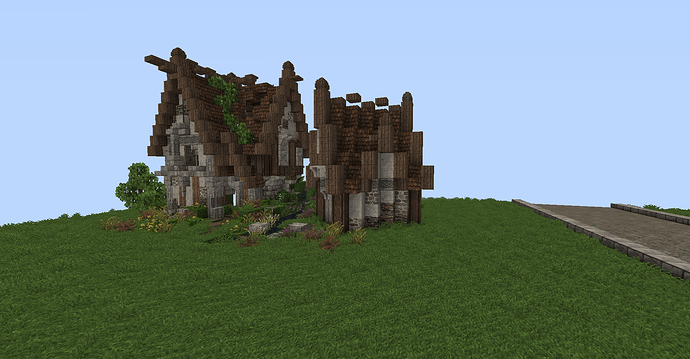 I would suggest spending more time to look at the other ruins for inspiration on your style. Materials should be similar to Earailin based on the surrounding terrain, although in the bigger buildings you could have more limestone. For the mansion I’d suggest a closed courtyard, with as stables attached. Either way, would the mansion be the only building inhabited in the area? It seems to be a crossroads of sorts. Also the surrounding terrain is rather hilly/rocky, so agricultural seems out of place, but that’s just my opinion.

-side note, shader pics tend to obscure your build. When applying for anything seeing something without shaders is often more indicative of how a build will be for the majority of people.
Sorry for the rant!

it’s ok, thankyou for the advise tho. the mansion is abandoned. the only building inhabited is the small one with yellow stripes over it. I will make changes to the concept and send a picture w/o shaders

I’ve made changes to my concepts, based off of Earailin as you suggested. Do you think I should make it purely a trading village w/o the agricultural stuff? Another business could be woodcutting/ woodworking, since the village is next to a small forest.

"abandoned for approximately 50-70 years"
The concepts you have got for this app look more like they’re a couple of hundred years old at least. I suggest either changing the date of abandonment or changing the concepts to look far less ruined.

I will change the concepts. I originally had the walls more built up but was advised to make them lower by Wheellee. I will probably not be able to come until the end of the week because this is my finals week but I’ll get some more intact houses built for the concepts.

Ok, I have made new concepts closer to date then the previous ones.

The house that’s more ruined doesn’t look realistic at all. I’d stick to something more like Celhant.

May I have some feedback on this?

I think that the settlement is too large. Cut down the number of houses around 30-40%.

Also, you need to label what professions the ‘work buildings’ were.

alright, thank you. Will do

New Map has been downsized 30%, the village is composed of 16 buildings and I have a profession for each of them. Like before, yellow means it is only a house, purple means merchant class building that may or may not have living space in it as well. Yantaorna was primarily a trading town from Forlond to most of the rest of Forlindon. there is a focus on carpentry/woodworking since the village is surrounded by wooded country side. By the way, I hope I was not ridiculously over detailed in planning, if I was please tell me: I hope this is better, if it is still to large let me know, you meant cut down the houses by thirty percent, not to thirty percent right?

Do elves need apothecaries? In times of peace

My reasoning for having a small shop that prepared medicines and had someone who understood the basics of healing was that it would be highly inconvenient to travel south to Forlond for small everyday injuries or sicknesses. On the other hand the inhabitants are elves and are much less susceptible to getting a cold, but I don’t think injuries from work or things on that line would have been unheard of. Especially since half the inhabitants are carpenters/woodworkers. If however the apothecary still seems unnecessary I will be happy to remove it.

Elves cant get injuries or deseases

This is reasonable, but our general assumption in the past has been that these injuries would be infrequent, and that many (if not most Elves) would be skilled in the arts of healing as they have lived for hundreds of years. As a result you wouldn’t need a dedicated apothecary in a small settlement.

As to your plan, it’s much better. My only critcism is that the remnants of the fields are far too small - here’s an idea of how large they’d need to be: 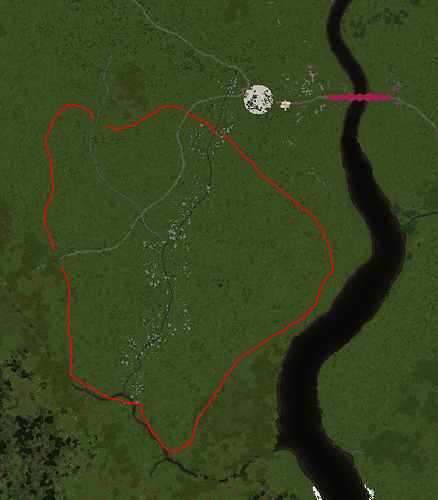 Sure, I will make adjustments according to that size. and I will get rid of the apothecary as well. Would these all be pastures, or for agricultural purposes as well? I had planned on making this a agricultural village originally but wheellee said it would be to rocky for this.

Edit: I turned the apothecary into an inn. Would this town even have an inn? I can just get rid of the building altogether.

They would be agricultural further south/nearer to the stream.

Safer to get rid of the building.