[details=Long story]After Smaug the Golden attacked Erebor in TA 2770, king Thrór and his family (under which Thráin, Thorin II, Frerin and Dís) escaped by the secret door. Many more Dwarves escaped than they hoped at first, but most fled to the Iron Hills. Thrór and his followers settled in Dunland.
In 2790 Thrór returned to Moria with a close friend. His head was cut off and the name AZOG branded on his forehead. This angered all the Dwarven clans so much that they hunted down every Orc in the Misty Mountains till they got to Moria, where Náin was killed and Dáin killed Azog. The surviving Dwarves refused to enter Moria.
Dáin returned to the Iron Hills with his Longbeards and Thráin returned to Dunland with his followers, where he stayed for a while before wandering in Eriador till they settled in exile east of the river Lune in the Blue Mountains. Most of the things they forged where made out of iron, but their population grew slowly. (They had very few women, even for Dwarves, whose population is only 1/3 female.) They had no gold, or very little.
Because of his ring, Thráin had a great desire to return to Erebor (with Balin and Dwalin), but he was captured and taken to Dol Guldur. There he was killed and the last Dwarven ring was taken from him.
Thorin was now Durin’s heir and he laboured long in Eriador and his population was increased by many of the wandering folk of Durin. Now they had nice halls and large stores of goods. Thorin however, called it ‘only poor lodgings in exile’.
As we all know, Thorin and his company left for Erebor, but that story is told elsewhere. Probably almost every Dwarf left for Erebor, at around Third Age 2940, but in the Lord of the Rings it was said that there could be seen Dwarves in unusual numbers fleeing westwards for a great terror in the east, so we can conclude that in TA 3006, Thorin’s Halls were partly repopulated.[/details] 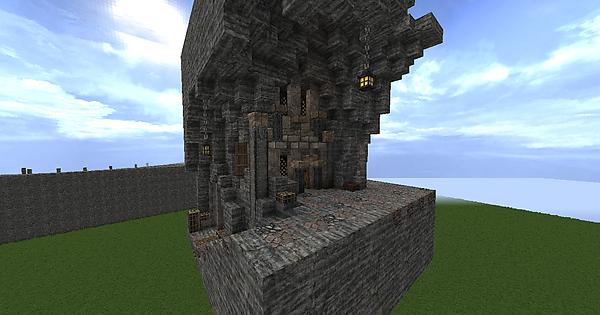 Each step, when completed, will be reviewed by the overseers.

Step 1: Do a rough plan of the mountain, halls, streets etc. with WorldEdit. Label everything including all professions with project blocks

Step 2: Project becomes public. Builders do all house facades (unsupervised) and the walls/ceilings/floors of the halls (supervised)

Step 3: Builders do all house interiors

Maybe add a cobbler and a glazier?
Cobblers are (if you don’t know yet) shoe makers and glazier make glass windows. I believe there’s a different between glassblowers and glazier, but I’m not very sure. Glassblowers make bottles and other glass containers, and glaziers are responsible for cutting and placing glass windows. Idk where the glaziers get their glass from in the first place, maybe someone else can tell me? Also I was thinking, it would be nice to have a small paper industry. Afaik there is none yet on our map. This would obviously provide paper for all the other mines and maybe trade some in the Shire.

There’s a few parchmenters in various places. No issue with having one in Thorin’s Halls though.

I edited the list with parchmenter, cobblers and glaziers. I also edited guilds to the lay out.

Will you include a small, half-empty library hall? I’d imagine the dwarves having brought a lot of their stuff back to Erebor, but i think they would still have plenty in Thorin’s Halls aswell.

Yes, I made that hall in the lay out☺️

Just that you know: there’s a difference between parchmenter and a papermill. I think it’s much more likely for Dwarves to have a papermill than a parchmenter, because parchmenters require cattle and a paper industry needs only a (water)powered mill, wood and fabric. The wood and fabric was made into a pulp with warm water and it was beaten by the power of the watermill. The pulp would evolve and eventually be able to be put into a rectangular ‘mald’ and dried to a sliece of paper.
I think Dwarves would not have a very high demand for paper; maybe only for there ravens. For simple notes they might prefer to grave in slates and more permanent records in stone slabs.

I think dwarves would use more paper than you’d think. I think they would be pretty litterate aswell.

i think 2 parchementers would be enough, cuz they can import hide and parchment is stronger than paper, so that would be longer intact for archives, stone tablets are too large and heavy i think. if they need paper for quick notes they can easily import some

I don’t entirely agree on that. Dwarves would keep track of everything they mined, what food they have in storage and allot more. So they would need allot more paper/parchment than you say.

I think I’ve given everyone enough time to have their say, and the project has a solid plan.

Accepted! Make sure to notify everyone when each step is complete

Thank You fornad, if someone works on step 1 and You did a hall please mark it in the lay out above the mountain with a stone Block, already thanks

️:grinning: mark it also with your name so I can find You if it is not approved

So I saw that the cesspits are also a debris dump… Idk how you imagined that, but I’m quite sure debris doesn’t burn away or anything. I think the only possible way to deal with it, is dumping it outside.

I’ve looked and I’ve only found barrels of dirt, no schist debris.

Ok then they dump it outside, doesnt matter in this fase of building

Alright lads, Step1 is done!!! If anyone got their critics or notices some issue please let me know!