Lore:
-The Dúnedain (S: “west-men”, pron. [ˈduːnedaɪn]), singular Dúnadan (pron. [ˈduːnadan]), were the the Men of Númenor and their descendants who peopled Middle-earth in the Second and Third Ages.
Some Númenóreans had settled around the haven of Pelargir, but others, who belonged to the Faithful, fled Númenor just before its destruction, led by Elendil and his sons. However there were also other colonies in Middle-earth founded by hostile survivors of the Downfall, known as the Black Númenóreans.
The Dúnedain formed the Realms in Exile of Arnor and Gondor, around the Middle Men who were ruled by Númenórean lords. Originally ruled by the High King of the Dúnedain, they were divided as the Dúnedain of Arnor and the Dúnedain of Gondor. Their lords and rulers communicated and surveyed their realms with the seven Palantíri they brought from Númenor, distributed around their lands.
After the fall of Arnor and then Arthedain, some of the northern Dúnedain became the Rangers of the North. The surviving Dúnedainic population of Arnor retreated to the Angle south of Rivendell. In the mean time the southern Dúnedain, the Men of Gondor, intermarried more and more with so-called Middle Men, except in some regions (such as Dol Amroth).
In the Fourth Age, the Dúnedain of Gondor and Arnor were reunited under king Aragorn II Elessar (who was also called the Dúnadan). (Tolkien Gateway)
When Frodo awakes he is in the house of Elrond at Rivendell. Gandalf is there. Elrond has called a council meeting to discuss what must happen. Gandalf tells Frodo that Strider is also called Aragorn, Man of the West, and that the Black Riders are also known as Ringwraiths or the nine servants of the Lord of the Rings. Gandalf also explains to Frodo how the Black Riders were defeated at the Ford of Bruinen. (Tolkien Gateway, Aragorn is referred to as ‘the man of the West’) 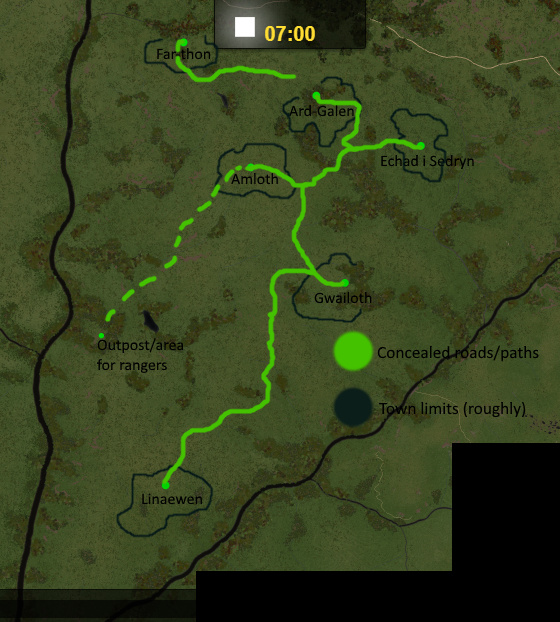 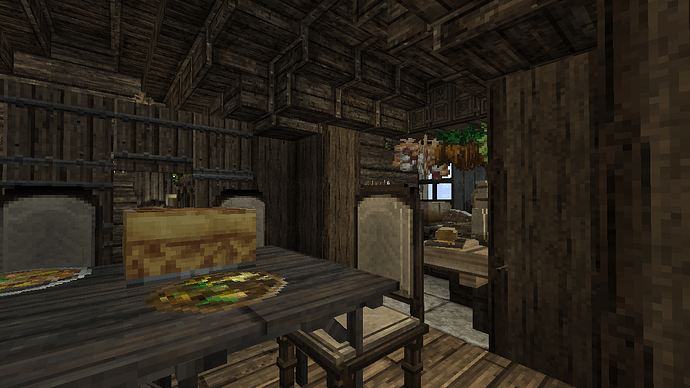 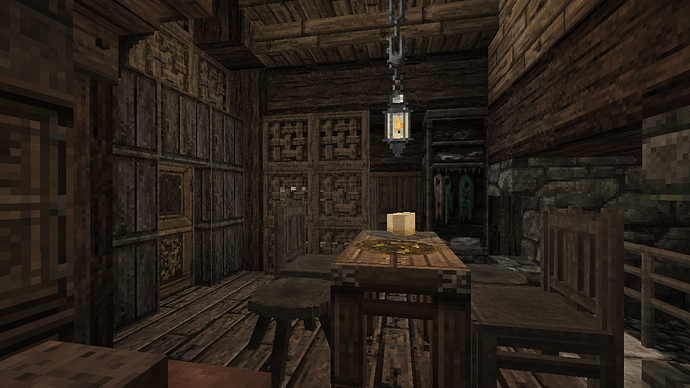 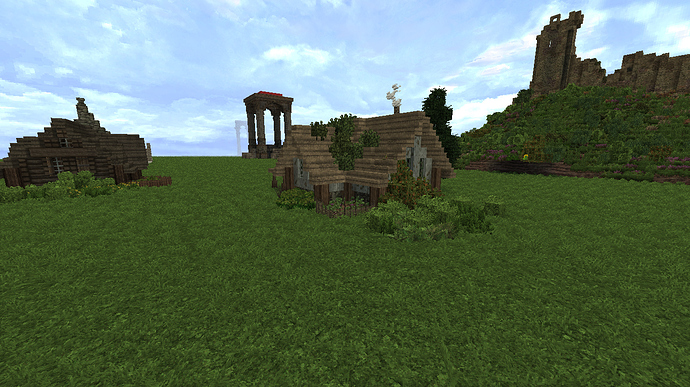 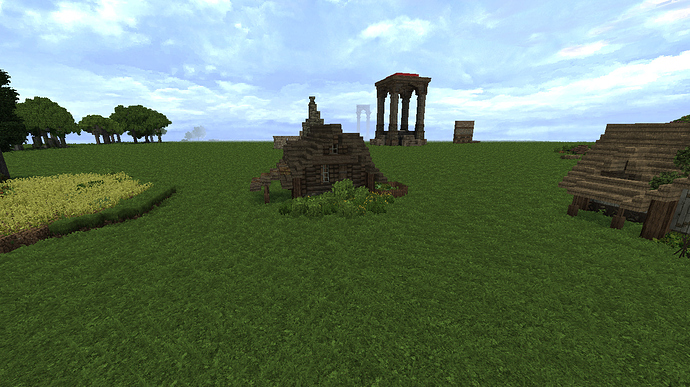 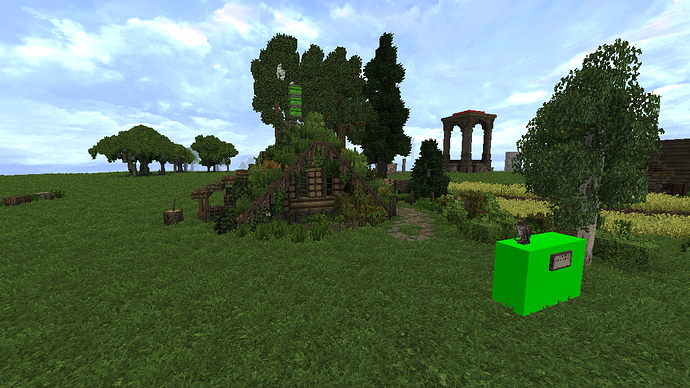 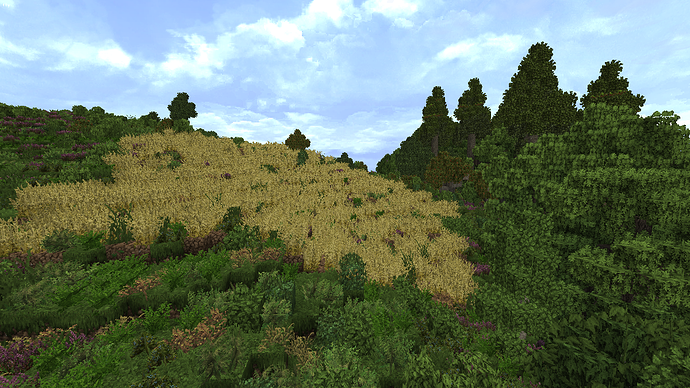 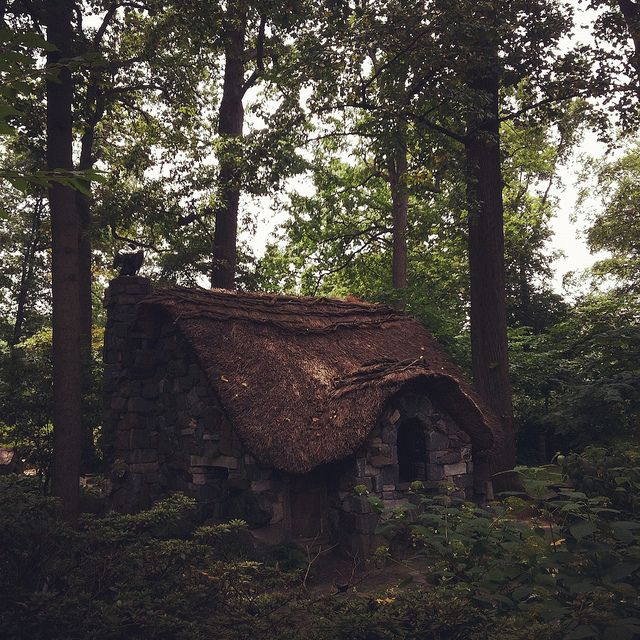 Also, I’d like you to show where you’ll be building Arnorian ruins.

So I made a little ‘essay’ about this. Firstly I think the overhead plan is quite good actually, for a couple of reasons. The Dúnedain seem to have had a close relationship with Rivendell, for example the Rangers helped scouring out the area around Rivendell for the Fellowship and Elrond fostered the children of the chieftains of the Dúnedain. So imo the settlement Gwailoth makes a lot of sense.

At the sign of the Prancing Pony
“In those days no other Men had settled dwellings so far west, or within a hundred leagues of the Shire. But in the wild lands beyond Bree there were mysterious wanderers. The Bree-folk called them Rangers, and knew nothing of their origin….They roamed at will southwards, and eastwards even as far as the Misty Mountains; but they were now few and rarely seen."

So this is why I think Echad-i-Sedryn makes sense. I agree with you that the settlements of Far-thon and Ard-Galen are a bit too much though.

Secondly I’d like to say something about the villages. I don’t think they need much more than 10 houses because I think the Dúnedain were a scattered people, rather than an organized military people. Maybe you can have one chief settlement where the chieftain lives. In the original version of the tale of Aragorn and Arwen (published in The Peoples of Middle-earth), Tolkien wrote:

“In the latter days of the last age [> Ere the Elder Days were ended], before the War of the Ring, there was a man named Dirhael [> Dirhoel], and his wife was Evorwen [> Ivorwen] daughter of Gilbarad, and they dwelt in a hidden fastness in the wilds of Eriador; for they were of the ancient people of the Dunedian, that of old were kings of men, but were now fallen on darkened days….”

What was this “hidden fastness in the wilds of Eriador”? The finished passage in the published tale is much shorter, for as with all parts of the appendices Tolkien was forced to shorten the material for publication. In the tale Gilraen eventually left Imladris (many years after Aragorn) and returned to her people in Eriador, but she lived alone, and Aragorn visited her in the year 3007 (he was then 76 years old, and she was only 100).

A “fastness” is a secure place, a stronghold. In essence, Dirhael and his family lived in some sort of fortified dwelling. Was it a town, or perhaps only a simple estate, like those of the Gwathuirim of Brethil and perhaps Eryn Vorn? Such estates resemble Beorn’s home, being one or several buildings surrounded by a high hedge.

Maybe only the chieftain’s house would have cobblestone, but I’d avoid having any other stone houses. After the battle of the Pelennor Fields, Aragorn says:

"Say a captain of the Rangers, who are unused to cities and houses of stone.”

And to your concepts, rlly like them but the fancy chairs and lantern with chain seem a bit to civilized to me. Maybe the same for the painted planks.

A much more thorough post! I agree with everything you’ve said.

@creepyboy666 has offered to help me with the arnorian ruins, as he has more experience with building ruins, I feel like it would be a tremendous help. I will consult with him on where the best places for ruins will be, and will also make a note to remove the 2 northernmost settlements as they will no longer be needed. As far as the fancy chairs and lighting goes, I can agree with you with the chairs however the Dunedain are not as “barbaric” as the idea of them suggests, which makes having a candle or lantern not out of the realms of impossibility for them. 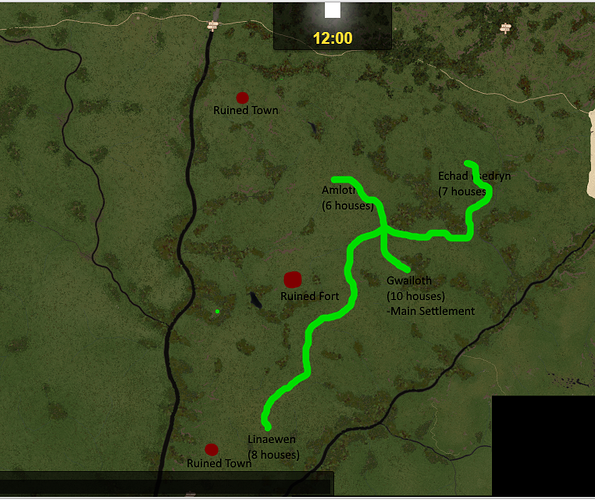 -Keeping the original town limits from the first plan.
-Of course ranger camps will be scattered around as well.

Could you add some farmsteads too? Where individual families or perhaps two families would live. 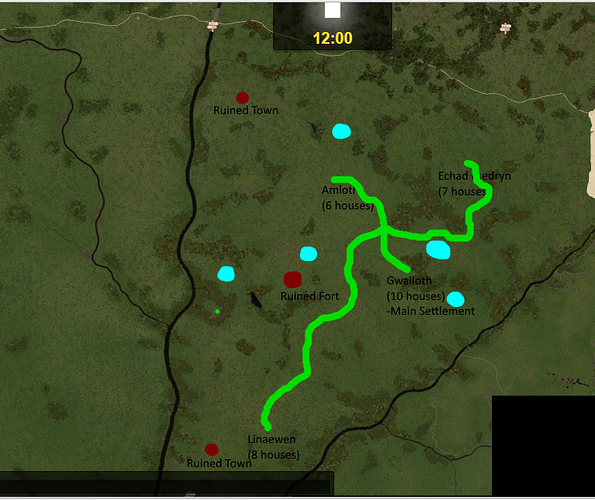 The farmsteads are shown in Cyan, most of them will be one family however one or two might have more deepening on the amount of farms. There will also be farms surrounding the village too, hopefully I’ll be able to connect the villages via farm fields to make everything more cohesive, however the geography of the area may be challenging to do so.
EDIT: Forgot to show the road to the farmsteads, however there will be maintained paths connected all the of the farmsteads to their respective village(s).

I’d like there to be a few more ruined forts, but other than that it looks good. Accepted!

Some more ruins along the rivers would be nice.

The ruins are abandoned for 1500 years so the way of the river would have changed over the years, thats why I think that forts close to the river wouldnt exist anymore

The rivers are in fairly steep valleys so they actually wouldn’t change course all that much. Rivers on flat plains do that.

I meant on top of the hills next to the rivers. I doubt those pieces of land would have changed much. The ruins might even be in better shape than in other parts of Arnor, considering the rangers basically lived there since the fall of their kingdom.

Have some abandoned/wrecked villages and/or homesteads on the level of the Forsaken Inn marked immediately to the south of the road near some of the water sources. I get that this can be considered ‘meme lore’ by Forn for being from the Hobbit Rewrite but there is some mention of other people aside from the rangers that had lived in the area, but fled south when the trolls came and ravaged and waylaid settlers in the area. It’ll just add more life to the region and make it feel more like a ‘frontier’. It is reasonable to assume they’d just have merged with the Dunedain by the Third Age, but might be nice to see some remnants at least of their old buildings tucked away in the gentle river valleys close to the trolls. I don’t know, can disprove me if you want but might be cool to have them.

I shall add a few villages in the layout, and some ruins on the higher grounds next to the rivers

This project will be private until Glar and creepy have made it suitable for public work.

time for an update:

The stoors lived around 1000 third age in the angle but in 1200 they moved on again, because of the rise of angmar, some went back to the anduin and some to the shire, should i make signs of them in the angle?