Lore: There isn’t much lore about the Lossoth people, so I will mostly stick to what the other villages of the area have done before. As this village is located on a more rocky location, which is unfitting for any kind of agriculture the inhabitants will be relying primarily on fishing and hunting.As the village is located on a hill, they would have to withstand stronger winds, this is reflected in the houses aswell, as they are more massive as other Lossoth houses. Due to it being quite close to Vilges-Batki I would expect a fair amount of goods and as such a well preserved path. 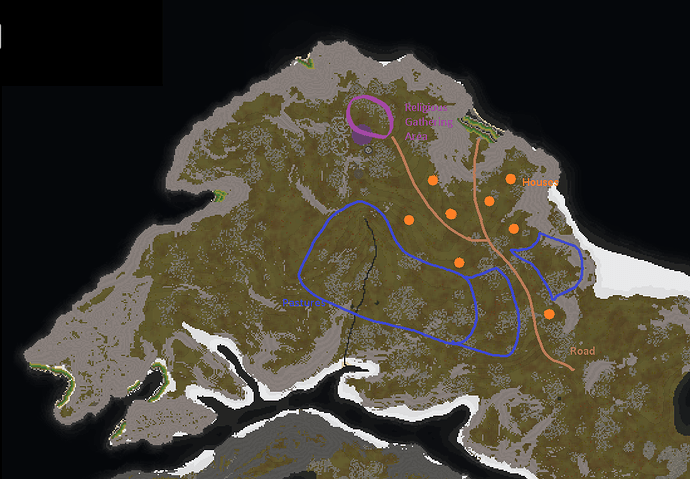 Terrain: Terrain can be mostly kept as it is, only small changes are needed for the Fishing area or the village.

Reference and concept Imagery: https://imgur.com/a/oUFj1
Very similar to the style seen in Sogjide-Gáddi. Basicly underground huts to keep the heat in, as it was common for inuit tribes. the door is lowered in order to keep the warm air in.

Because of the location, I was thinking this village could be the gathering place for all Lossoth in case of a disaster or something. Could you add some sort of council/gathering area?

About that disaster thing. Couldnt we have some burned down houses and stuff (thatch roofed ones) in some lossoth vilages?
I saw a application from someone i cant remember the name of atm, he made a very good concept for a burned down house

Note : Ex-apprent @pixelamoeba is the builder of the burned house concept

Note2: forgot to mention. You would be talking about fire because of a lighting strike or maybe an accident whit the fireplace.

Updated:
I added a Council/Religious Gathering Area at the highest point of the hill. I would base it of the Stone Table from Narnia or Stonehenge. It would be a stone construction, as all of the tribes would probably join forces to make it stand out.

Plan looks good. For your concepts, like the other recent lossoth settlements, I’m going to say that you can’t have any blocks with metal either showing or required to make them. This includes the barrels you’ve got in your interior, crates, pretty much any complex furniture like drawers, wardrobes, cupboards, tables and planks. There are plenty of non metal blocks that can be used for decoration and not having metal will make the village feel a lot more primitive and in line with native tundra peoples.

I like the Skellige Micheal stuff you’ve got and the concept house that is just visible in the background of your screenshot looks quite good. Just not sure about the way you’ve kinda mashed the two styles together with the reinforced planks.

Also, one of the few pieces of lore we do get about the lossoth is the fact that they use sleds so I suggest having a few of these as well as some dog kennels.

Updated:
Changed the Style, after suggestions by @Oriol and @eag_inc. Also changed the Planning for the Village, which is now located further down the hill

Looks good to me, accepted.

How’s this going luk? Haven’t seen much progress lately and it would be good to get it finished and out of the way.

I am very sorry for the late reply, but i do have some problems with my pc atm, while being busy with school, so its kind of hard to come on atm.

@Chevy_the_cat is now in charge of this

Lossoth 4 is now open to builders. Read the in game guide…there are a few different things to know from the other lossoth builds. Message me if you are interested in a specialty project.

Lossoth 4 has been completed. Shout out to @Snowy30 @philippetora @iNamelessi @Lindalher @Matt and @Oriol for putting in some work and creativity. Also, thank you to @_Luk for the initial layout and concepts.

This village is Geagaddi, stone shore. Located at the Northeast tip of the Ice-Bay, Geagaddi is subjected to the biting cold more than any of the other Lossoth settlements. Because it is centrally located between villages, it serves as the main gathering spot for the tribes. A large, circular, stone sun calendar has been constructed at the top of the highest ridge. Inside are 8 thrones, one for each village leader. Here, they gather during the summer equinox to hash out trade agreements and also any disagreements between the people. The yearly gathering is a time of great joy and festivities. The people of Geagaddi are known for their worship of the dead. They believe their ancestors who have passed still live among them. Skulls of the dead can be found throughout their burial area, some even propped up in the trees.