Lore: Little lore exist for the Lossoth. This village is the closest to Lossoth6, the chief village of the region. Because of this, I have decided that this village would be small. It would be mostly a less-sheltered version of Vilges-bakti. Most of the village would be based on life-necessities. 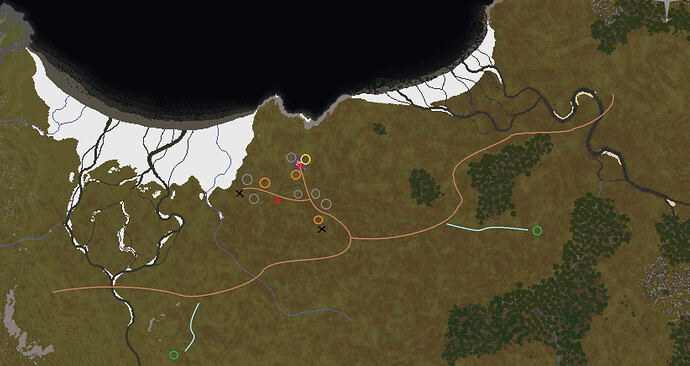 Tan: Main Paths going to Lossoth6 and Lossoth8.
Grey: Lower-class houses (see bellow) The two by the beach will be fishermen, the 3 by the exit of the town will be hunters, and the northern one will be of an old woman.
Orange: Middle-class houses (see bellow) The one by the beach will be a fisherman, the one to the south will be the butcher, and the one to the north will be a hunter who has some free time for wood-working.
Yellow: Shaman’s house (Slightly larger middle-class house with thatch roof, based off of Vilges-Bakti’s)
Green: Hunters’ outpost (lower-class) One would be inhabited currently, the other not in use.
Light Gray: lightly trodden paths to the Hunters’ outpost
Black X’s: Work areas for Fisherman (near the beach) and Butcher.
Red X’s: Village sitting areas with fires.

I have provided an example of both a lower-class and middle-class house for players. I have also provides basic block pallets for builders.

(If you want to see this, go dirrectly south at /warp fbmisc.)

Terrain: I would make sure all of the surrounding streams are done, along with the beach. However, I would change none of the rest of the terrain, and in-fact work on making the village blend with the terrain.

Reference Imagery: I would mostly focus on Vilges-bakti for the feel of the village, with the open-landscape of Lossoth6 to help with other parts of the village.

I suggest moving the shaman house (yellow) more to the centre of the village. That would be a more logical place for the house of an important person.

Agreed. Please move the shaman’s hut to a more central location. You also mentioned that the shaman hut would be thatch; just remember that thatch roofs need to have at least a 45degrees angle to keep them waterproof. With these points in mind, i think this can go ahead

(one more overseer needs to accept)

Thanks. I had originally put the hut there because it’s the top of a hill and I figured it would be cool to have the central part of the village, but I can certainly understand moving it to a more actual central part.

If you like the location of the shaman hut then by all means change up the plan a bit by adding a few huts or moving some further north to make it more central. That way the shaman hut would be central and on the hill. Up to you but if you do like that idea then could you update your overhead plan to let us see how things would look. Thanks

Another suggestion:
Maybe have one or two farmer houses in the village (along with a couple of fields), the people who live there won’t be able to live only on fish and meat. They would suffer from scurvy because of the lack of essential vitamins. 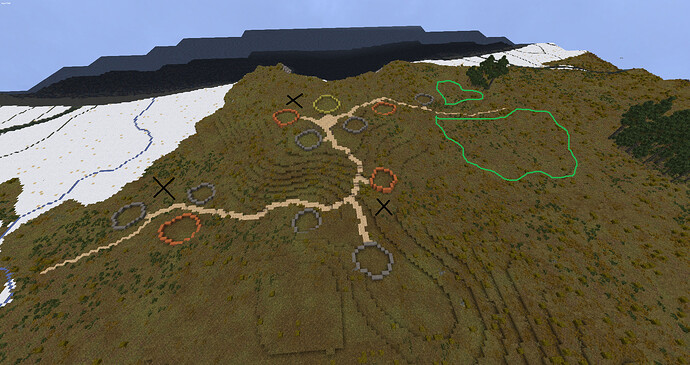 I figured before I got much further, I’d see if this worked well as a final layout, as I’d rather not have to go back and change things later. I feel like it stays fairly true to the original concept, while also giving the village a nice uniqueness of having basically just sprouted up along the main pathway.

Looks good. Although, I don’t think wheat would grow up here. Possibly change the field to potatoes and the smaller plot to a berry patch?

If you can effectively grow potatoes depends on the amount of rain. Potatoes dont grow well when they have a lot of rain. So i think carrots would be better, or maybe lettuce (i dont know for sure if lettuce is in the modpack) as they are more suited for cold climates with rain.

The village is now open.

Can we get an update?

Anyway, Lossoth7 is going along fine. Most houses have been finished (2 need to be changed to be brought up to standard and 1 needs some minor details fixed once it is decided what would be grown in the fields).

Speaking of that, I never got great feedback on what to have grown up here. There was some talk about Carrots and Lettuce, but that didn’t get approved nor denied. Also, would the fields still have anything in them this far North at this time of year?

Other than that though, I just need to go through and get minor details done around the village (foliage and paths mainly), and it will all be done.

Thanks to all who have helped out so far, and sorry for being inactive for so long: the past few weeks haven’t gone quite how I expected. I think I’m finally back to a point where I can do stuff though.

I did a stream going through a wooded area. I could do some detail work to some of it if you wish…whatever that would be.

I’m looking for someone to take over this project to finish it. Not much is left, so should be fairly easy. Contact me on discord if you are interested.

Hi, I am taking over this project now. As Fronacen said, there is not much left, so I dont think that It would take longer than one week to finish Lossoth7.

@Snowy30 @Fornad Lossoth7 is at sea level…i assume its a harsh climate…? Im working on a stream and have been talking about putting more features into streams…this one is out in the open and would be visible to any visitor. Point is, there should be, at the least, shrubbery lining the banks. Even in desert areas, like the US Southwest, where there is water, plant life flourishes. 1. Snowy do i have permission to spruce up the stream area? 2. Fornad…What kind of leaves can i use to represent shrubbery in this area?

Yes this would be the case however, similar other stream detailing, there are just far too many streams to do this feasibly. We are adding details in lore important areas but unless you want to line every stream with vegetation then i’d say just leave it.

i understand the problem with trying to detail streams…too many to be feasible. But this one is out in the open next to the trail and i find it fun doing landscape details. Its not like we are on a deadline to finish middle earth. If you have ever played Oblivion, it is an amazing experience to walk in the middle of nowhere and find small details in nature.

Sure, but by detailing just one stream it kinda makes others look and feel unfinished right. I know this is a bad mentality to have and verging on MCME policy but the landscape should, imo, feel somewhat unanimous with the surrounding area (unless there’s a reason for it to change).