Lore: Simple Rohan stuff, single house for 4 ppl i reckon, livestock farmers, keep pigs and chickens. Would probably butcher the animals, so will have a place for that (in the barn most likely), and a small allotment behind the house for vegetables. 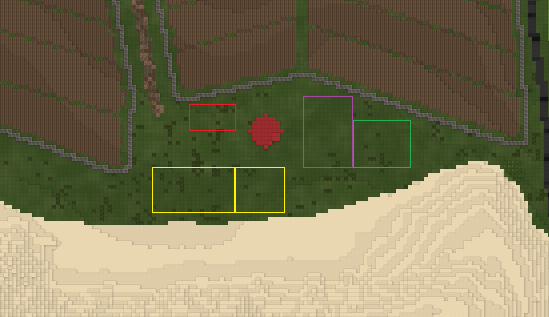 (Will probably readjust some of the sizes of these, the layout is just a rough idea of where things will go)

Concepts: Was thinking of doing one of these ‘low’ A-frames for the house, similiar to the fletchers I made in village2 (see below), and the typical Rohan-style building seen in other homesteads for the barn. 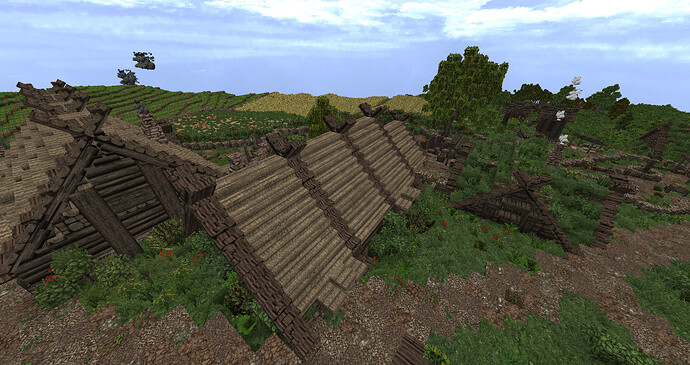 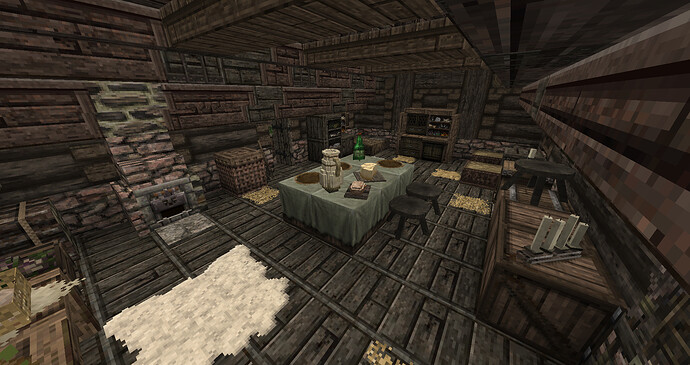 Timeframe: Should be done in a week or so.

Noticed there needs to be around 20 people in each homestead, so will expand the layout, add a couple more houses once the terrain behind the houses is done.

Edit: Something roughly like this, pigs in a pen in the middle, 4 houses around it with 4/5 people in each. Small pen for the chickens next to the pig pen, and the barn off to the side, out of the way. Added another allotment to help sustain the homestead, may add another if need be. 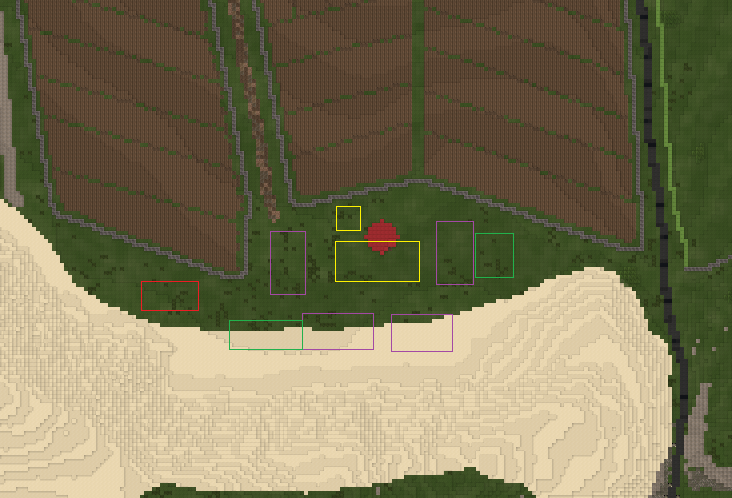 *Forgot to mention, will probably need a small part of the terrain to the south finishing so I can get the 2 lower houses built.

Right, make sure that the homestead connects with the cropfield (example below or look at homestead 7 and 8). Also don’t build more than 3 living houses, better to have big families and maybe 1 extra barn. You may start as long as you agree to this. 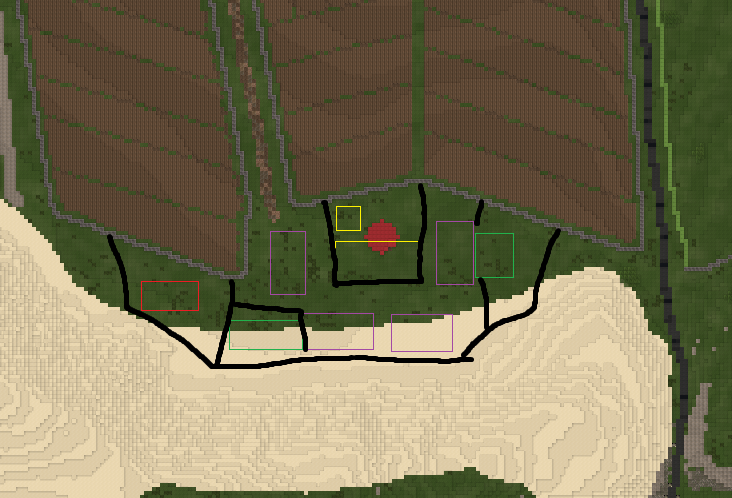 I would also make it more similar to Ahorn’s style (for continuity’s sake.The deeping combe should feel more connected, at least tangentially, rather than having 5 different styles in the same place. They’re right across a field from one another and it doesn’t make sense for them to look completely different really at all. Subtle differences in materials (e.g. more of a limestone base in the homesteads backed up against the cliff), perhaps also in the visibility of the roof borders would make sense to me, and also in size), and maybe also not just choosing village2’s Beorning style and copying it into Rohan. Low A frame roofs are definitely cool, but it would be nicer to see them in a part of Rohan further away from the mountains and more in the plains itself, and also for it to not be just a copy of a style already present on the server (not only that, but in a location so far away from it, too. While the Beornings are tangentially related to Eorl’s people in the distant past, I doubt their styles would be so similar at this point in their cultural development).
Regions of the Westfold should look similar in terms of layout and roof shape/style, but gradually transition into one another. Look at the Shire, even though many of the exteriors are outdated in terms of present standards. If you teleported from Buckland all the way to the North-farthing, you would notice a distinct stylistic change. However while walking, each village gradually transitions the style from one to the next so this change isn’t so jarring.

EDIT: Similar, but not an exact copy. You can add your own personal flair. By limestone I just meant vanilla cobblestone, not limestone huge brick

Homestead is complete, as I don’t feel there’s any more to add to this, but obviously you might find some things to improve on. Regardless, I’m happy with how it’s turned out. Went for something a little different to the usual way these are laid out, but if you don’t like it, I’m more than happy to change it back to the standard layout if you want. With my current setup, I’ve exeeded the target of 20 people to a homestead, with ~30 beds in total (without being overcrowded, might I add), with what I feel is enough food supplies for this many people, with two decent-sized allotments in this homestead, plus some livestock.

Don’t know how active I’ll be the next couple days, so just do any minor changes yourself, and if it does need complete reworking I’ll get on it asap. If you need anything explaining, I’m happy to do so.

Edit: Have done some small changes that were suggested to me, which has reduced the number of beds down a little.

Good job, i will take a closer look as soon as possible.

Everything looks great after a second look.