Location name: Various spots to the west of the Anduin, between the Limlight and East Wall of Rohan

Lore: Shameless Copy/Paste of what Fornad sent us.

“On his return [from his campaign in TA 1248] Rómendacil fortified the west shore of Anduin as far as the inflow of the Limlight, and forebade any stranger to pass down the River beyond the Emyn Muil.”

“At that time [TA 1944] the forts upon the line of the Anduin north of Sarn Gebir that had been built by Rómendacil II were still in repair and manned by sufficient soldiers from Calenardhon to prevent any attempt of an enemy to cross the river at the Undeeps.”

“The wide lands south of Mirkwood, from the Brown Lands to the Sea of Rhûn, which offered no obstacle to invaders from the East until they came to Anduin, were a chief source of concern and unease to the rulers of Gondor. But during the Watchful Peace (TA 2051-2460), the forts along the Anduin, especially on the west shore of the Undeeps, had been unmanned and neglected. After that time Gondor was assailed both by Orcs out of Mordor (which had long been unguarded) and by the Corsairs of Umbar, and had neither men nor opportunity for manning the line of Anduin north of the Emyn Muil.

Cirion became Steward of Gondor in the year 2489. The menace from the North was ever in his mind, and he gave much thought to ways that might be devised against the threat of invasion from that quarter, as the strength of Gondor diminished. He put a few men into the old forts to keep watch on the Undeeps…”

“Cirion was hard put to it to hold the line of the Anduin. Foreseeing the storm, Cirion sent north for aid, but over-late; for in that year (TA 2510) the Balchoth, having built many great boats and rafts on the east shores of Anduin, swarmed over the River and swept away the defenders.”

After that point, the responsibility of defending the Anduin in that region fell to the Rohirrim, and there’s no indication that they manned those forts themselves

So we can say that about 500 years ago, the forts were in a good enough state to be manned by defenders, but were already very old by that time 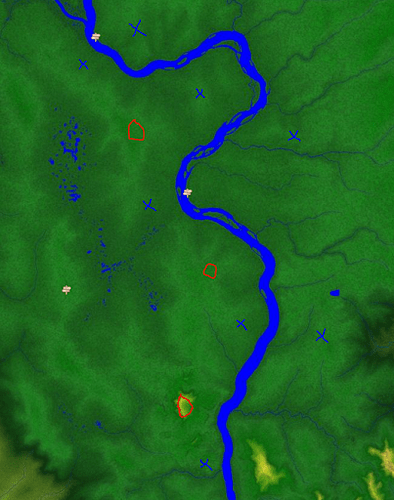 This is the map Fornad gave us, identifying where the fortifications could roughly go, with the blue crosses being watchtowers, and the red circles signifying forts. I haven’t been to every location yet, but it looks as though they’re all well placed on raised terrain, and in sight of each other. Given the beacon network was already established along the White Mountains, perhaps the system was copied on a smaller scale, each fortress having a beacon of its own to alert the others of danger. 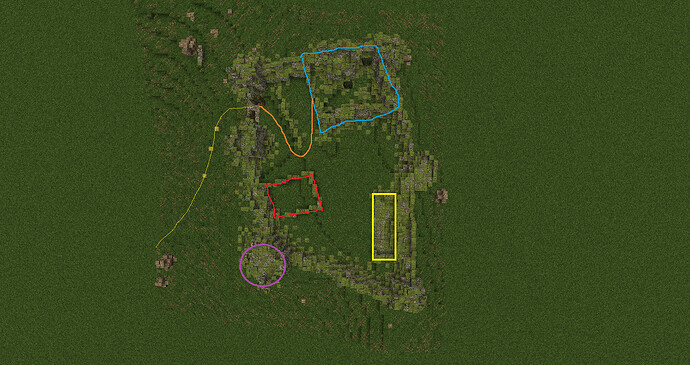 531920×1017 1.61 MB
Blue: Main Keep
Yellow: Stables
Red: Other building, whatever that would be.
Yellow: Very old road, basically entirely reclaimed by nature.
Purple: Possible location of beacon.
Orange highlights a very slight incline up to the main keep and yard, to keep as much of the original terrain as possible.

Terrain: The only bits of terrain we’d need to alter is adding a network of pathways between the fortifications (albeit almost invisible, given the time that’s passed with no one maintaining them) and some smoothing of inclines around the edges to help it blend better.

Reference Imagery: It has been a tad difficult to find any Byzantine fortifications in the right state of decay, they’re either too ancient and are merely outlines of rock, or have been preserved and turned into tourist attractions. We want to add a little spark of detail to each ruin,an arch here or there or some wall detailing to make them identifiable as Gondorian, without making it look like anything other than a fortress (third and fourth pictures below). 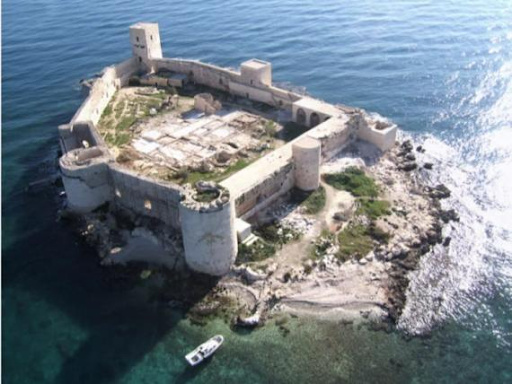 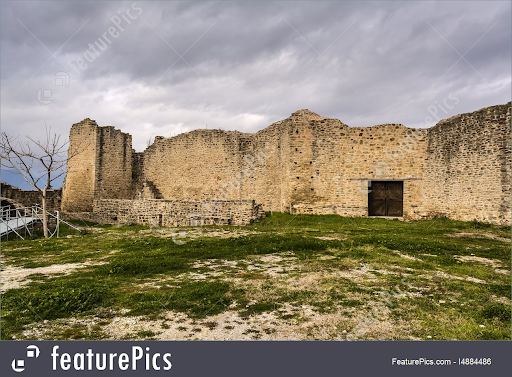 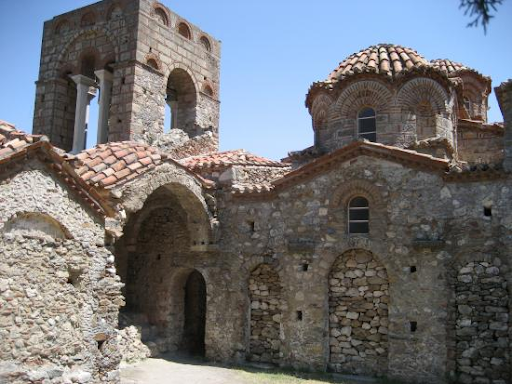 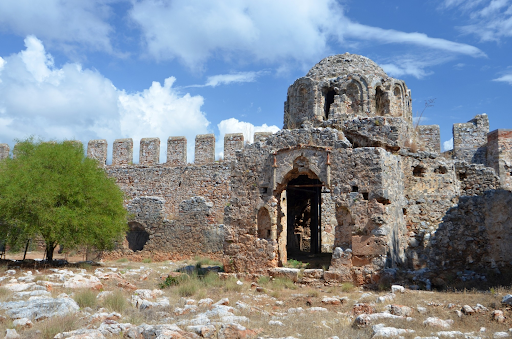 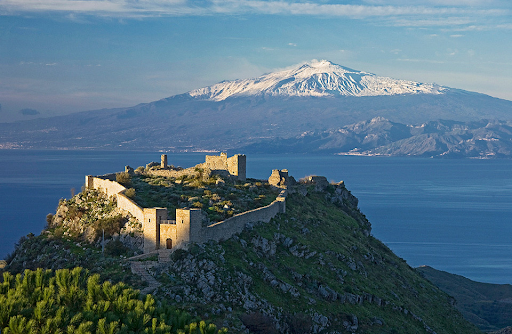 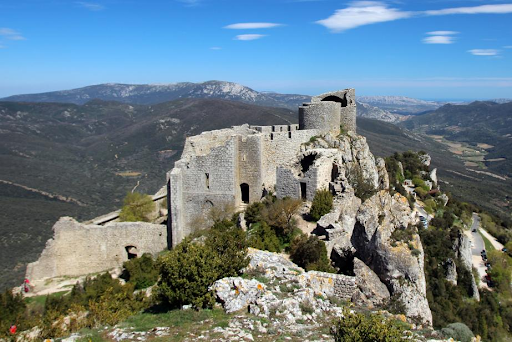 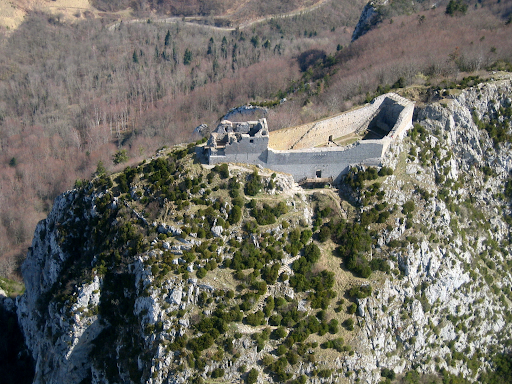 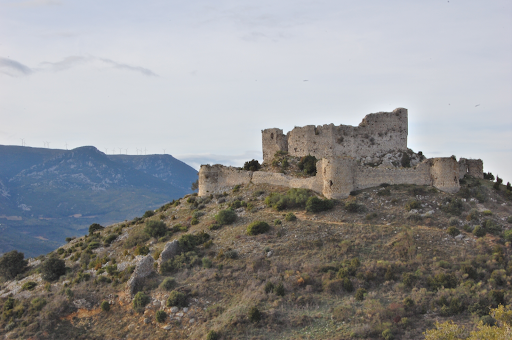 We copied a section of landscape over to start testing stuff out. By no means finished, you can see the state of the ruins we’re going for. And, we realise it doesn’t blend well with the terrain, but the freebuild world only has the one grass colour, the main world has a much wider range of grass colours in the area we’re building. 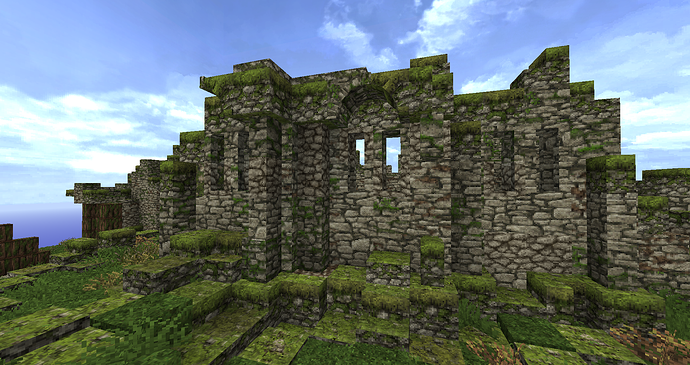 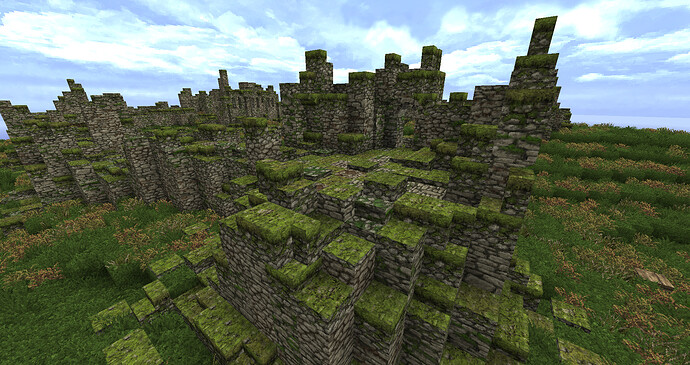 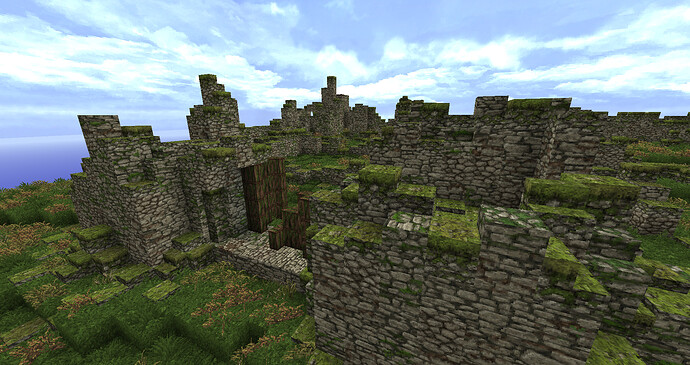 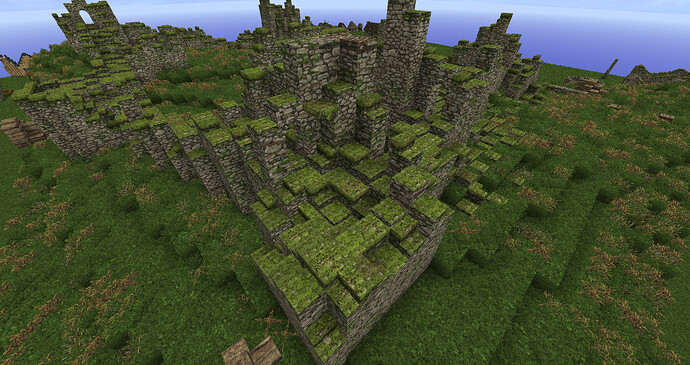 Right now, we don’t have outlines or plans for the other forts or towers, but once approved, we can make a rough outline of each out of the weathered materials, and give apprentices the opportunity to ruin them further, adding layers of overgrowth and bits that have collapsed.

The southernmost fort, being on higher and steeper terrain, acting as a strongpoint between the Eastemnet Downs and the East Wall of Rohan, and being closest to Gondor itself, I imagine that would have been the largest and most well supplied, therefore will be larger than the other forts. This’ll give us the opportunity to see how well the Apprentices work with each other, and us.

In-game guide: Using the Arnor Ruins guide (/warp arnorguide) as a base with, as mentioned above, leave to add a little Gondorian flair. Given the Arnor guide concentrates (naturally, given the state of decay) on the detritus around the base of the ruins, and the fact we ourselves would make the ‘skyline’ of each fortification out of wool, we feel this is adequate guide material to allow those working the opportunity to be creative, while upholding the rigourous standards expected of Ardacraft. Needless to say, we’d also be watching each build closely and offering advice, and touching up some things that need it.

Wouldn’t Rohan keep at least some scouts in these lands? I mean, some very small companies of horsemen periodically passing by to check if everything is in order? If so, the ruined castles could have some well hidden mantained/rebuilt rooms that they would use to sleep sometimes. Or at least have some evidence of their presence like a couple of little camps.
Evrything looks good to me btw.

Looks fine to me aswell, the scouts thing is a good idea, would add that to one of the forts maybe.

Approved guys! You can start building.

Yeah, I ripped them out soon after posting.

Watchtowers are all done, and I want this project to be done by the end of next week because this has gone on too long and I’ve been drafted into Moria. So here we go, boys, it’s epic fort time. 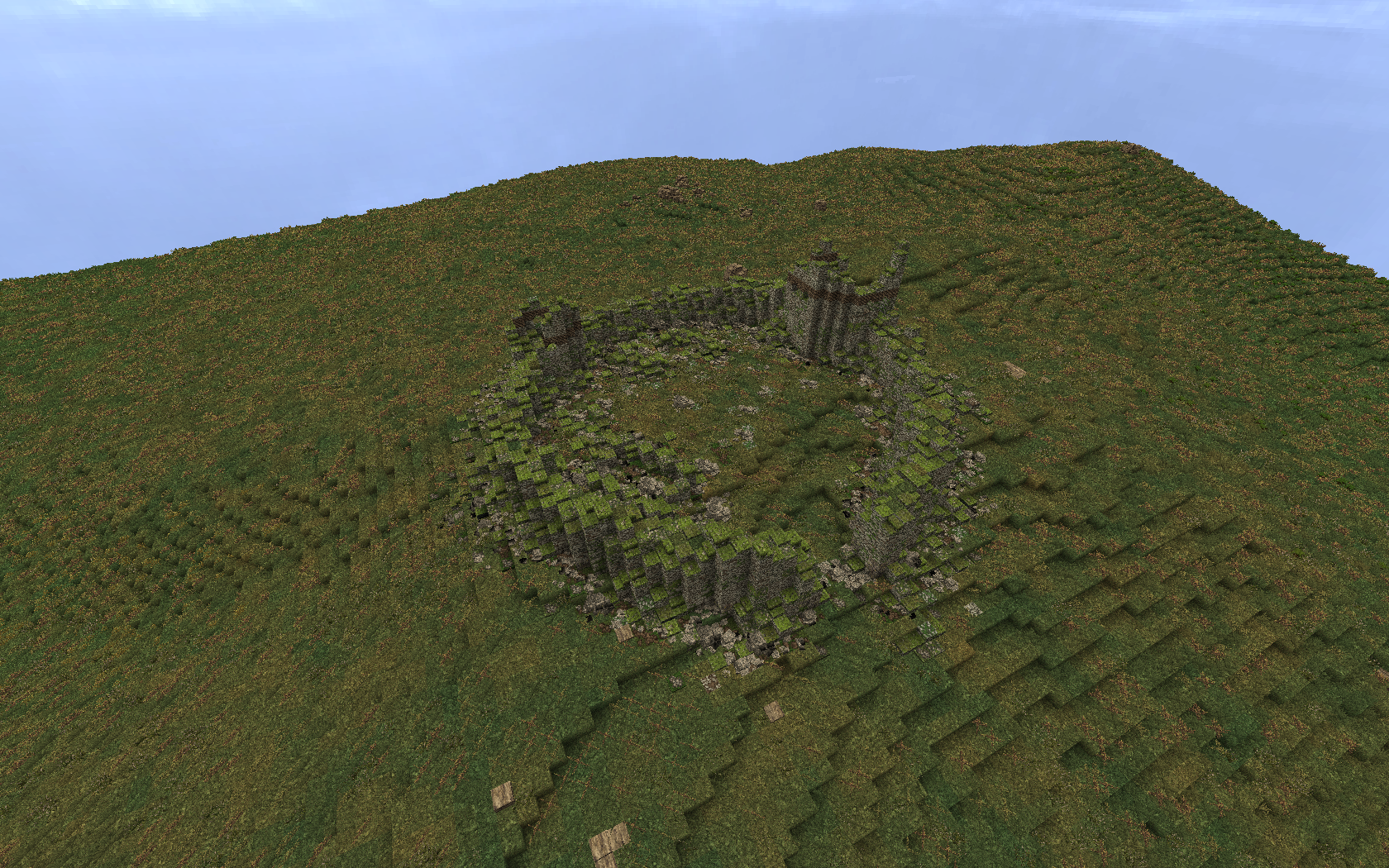 @Sunwing34’s North Fort is pretty much done. You’ll notice it’s changed at some point between the application and now, incorporating that Gondorian circular thing we all like. I think it could do with a ditch around the walls, but it doesn’t particularly matter. It’s the South and Middle Forts that needed attention. 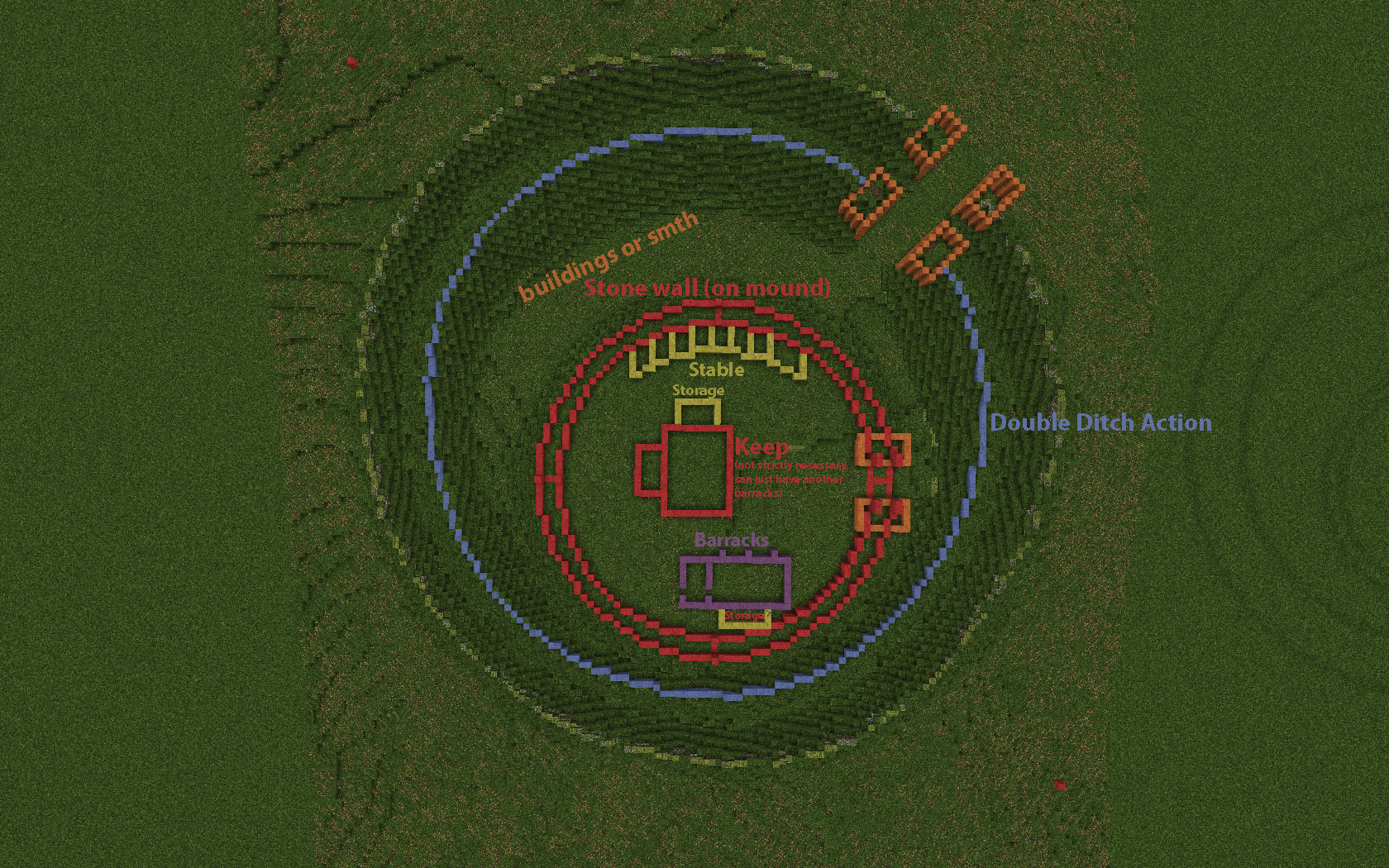 So here’s the Middle Fort design I have. I figured that since these forts were built on the outskirts of Gondorian territory, in a place that was more like Rohan than Gondor, there may have been some Rohan hillfort themes pervading the design of the forts (an architect from Calenhardhon or smth). So a kind of Roman/Anglo-Saxon fusion.

Turns out there are forts like that in real life: Maiden Castle. An anglo-saxon fort that was taken over in the Roman conquest of Britain and then garrisoned and expanded by the Romans. So I based it on that, except this one is circular. Because yes. Is that justification too contrived? Idk

Moving on to the South Fort: 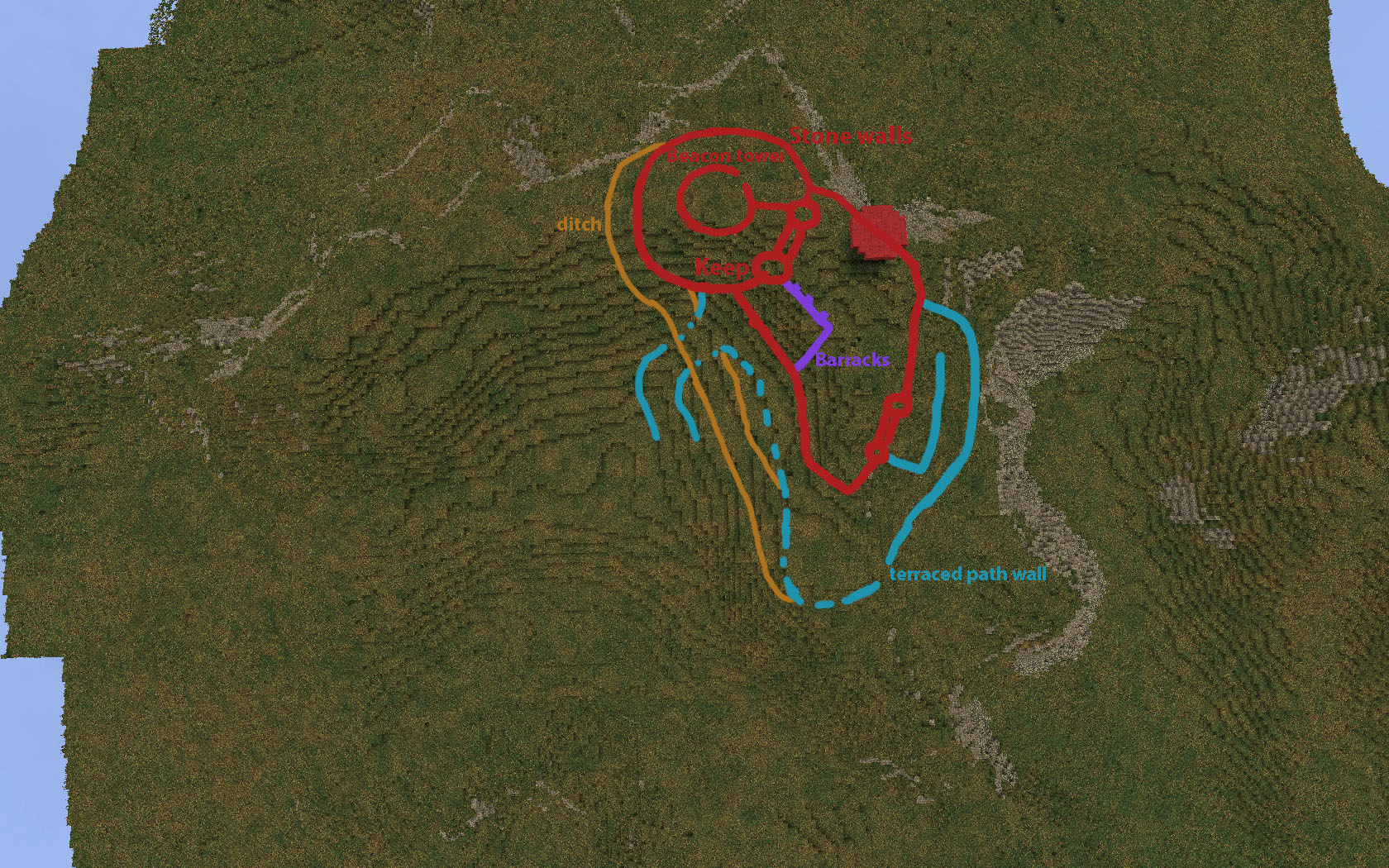 Here’s my idea, drawing on some of the Cathar Castle pictures you see earlier in the thread. It’s smaller in terms of area than the middle fort, but taller and tighter in structure and would have been designed to be harder to crack, with terraced paths winding around through multiple gates. Built on high elevation, the Gondorian circular theme is less prominent, the walls mostly following the contours of the hill, but there’s still a circular keep at its centre (I imagine this will look a bit like Helm’s Deep – only smaller, and ruined).

Being the largest castle in the region, it was kind of the centre of power in the Brown Lands and the Wold, as well as the place where a defence of the west bank would have been planned from in an invasion. As a result, the hillfort theme is less pervasive, though significant earth-moving is still present in the form of the terraces, as well as a ditch-moat on the south side.

That being said, I’m still a little worried about there being too large a style difference between this one and the other two forts. Feedback is appreciated. If no one has any problems, then these can be moved ahead with.

I wouldn’t worry too much about style difference for the south fort, you could explain the difference in the wall shape due to them adapting to the local terrain. 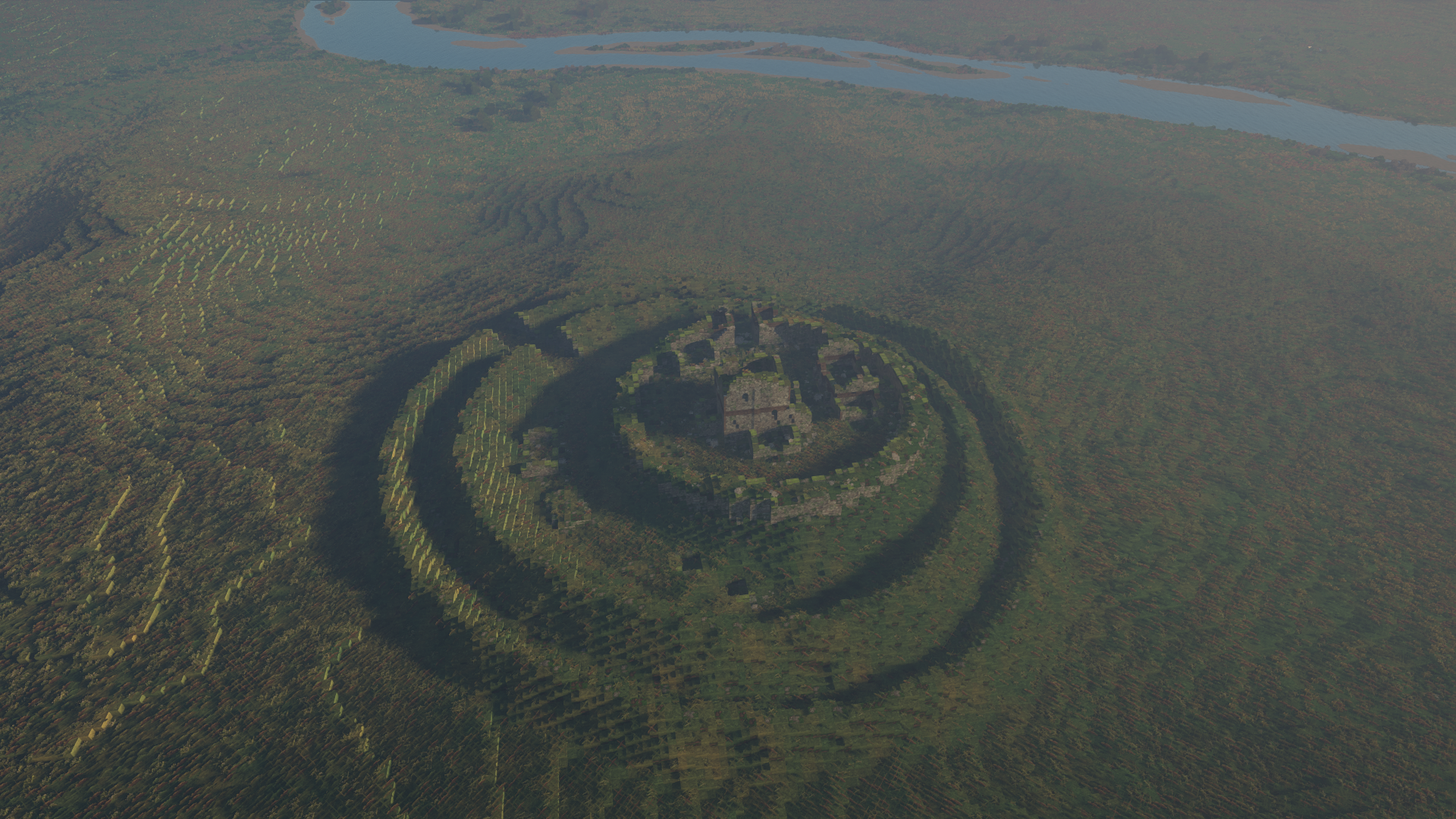 Back to the mines for you @Soap887