Private or Public: Until I finished the layouts of the towns it will be private, then ill open those for public.
Location name: Trollshaws 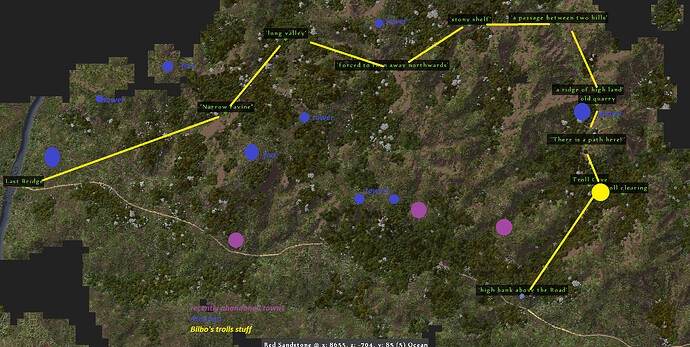 Terrain: Around the lore path, there will be more fallen trees, animal dens, hollow/burned trees, and the streams will be done ofcourse 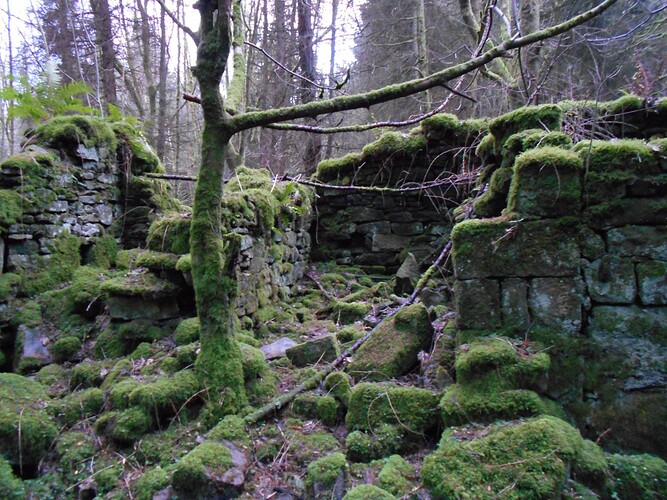 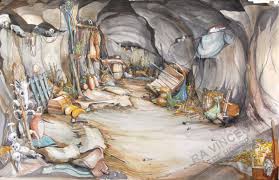 First ill focus on the troll caves, while doing that ill make sure the layout will be done for builders/apprentices to work on the ruins, and when i am done with the private stuff i hope that the ruins are almost done, I think i can make that the quickest method for this project.

A) Find a colead who has prior experience with nature. I’ll probably detail for you what needs to be done anyways but your main concern should be the forts and abandoned villages.
B) Here is my fully detailed trollshaws lore document I made a while back. It goes even further in depth. Dates they traveled doesn’t matter.

Trollshaws Lore: Bilbo’s Path The Last Bridge “The track climbed to the top of a ridge, and then went down steeply into a narrow valley… Through the valley a strong river flowed from the North, cutting across their road. Beyond it the dark hills...


C) Your fellowship’s path is entirely wrong. I’ll detail a correct one tomorrow.
D) Caves generally don’t form naturally in sandstone. The troll cave was most likely tunneled in. It should really honestly be the only cave that does contain trolls in the trollshaws themselves (the woods were never called the trollshaws in-universe, only on maps to denote that they indeed were the woods where bilbo met said trolls).

-I can discuss it with you ingame either this weekend or next weekend when i have time. I’d also suggest placing the settlements closer to roads and/or watersources. They should mainly just be close to the road though, considering they’ve only been abandoned for 70+ years or so so evidently there should be routes to them.

I can at least be there to advise for the nature aspects of the Trollshaws. I’ve found it’s one of the things I like, plus I can be there to bounce some ideas around if need be. If you’d like my help, that is. I’ll leave this project to you mostly, because it seems to almost be a one lead project. But I will be there to ensure that every plant and rock is right.

Glad to hear You want to help me,

And wheellee, I shall update the map, Just message me on discord so we can discuss there, the red on the map was Just to mark the size of my area. also Wheellee’s lore is posted in the thread. 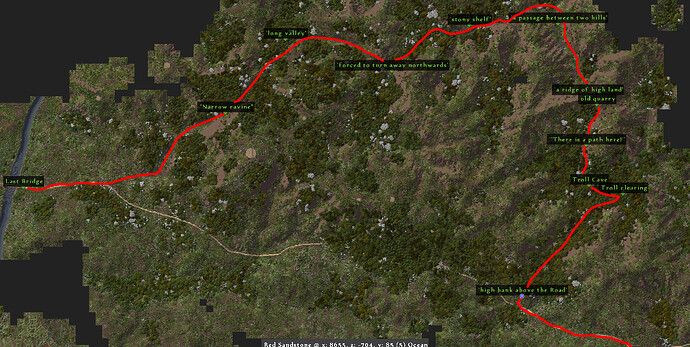 This is the correct path. I’ve left a series of wool markers above all the waypoints marked on the map.

According to Fornad’s plan I have made this new layout, There will be just 1 troll cave here, which is the one of Bilbo’s trolls. The Arnorian towns are placed near roads or water and the quarry is used at the spot used in the books. The 3 abandoned towns will be not really large, around 20 houses each, the inhabitants would have been partially eaten and partially merged with the Dunedain to the south.

Cool, will teach you the tips and tricks needed for the nature aspect (ssp. voxel) once you get accepted. It looks good to me. Just remember this quote about the forts:
“In Rhudaur an evil folk, workers of sorcery, subjects of Angmar, slay the remnants of the Dúnedain and build dark forts in the hills.”

The Peoples of Middle-Earth, HoME Vol 12, Part 1, Ch 7, The Heirs of Elendil: The Northern Line of Arnor: The Isildurioni

So maybe go with a later style of layout for the castles than what’s done in arnor, possibly similar in shape to drum towers for the keeps surrounded by a series of walls.

Other than that it looks pretty good to me!

I think this is at an acceptable level now. Although you’ve missed one of the clay circles that mark the forts/towers; directly East of the Narrow Ravine.

O lol I see, I changed it, hard colour to notice.

I also think this is acceptable, good luck creepy.

These are the only things public for the trollshaws so help would be really appreciated, also read the guide and look at the examples,
Over and out
-creepy

Time for the second update of the trollshaws, I can tell you guys that I am around 65% of finishing this!!! could be even more.
First of all I want thank everyone who has helped me so far, especially @philippetora who has served as my personal slave this month he did in total more than 30 houses! great job!!!
This month was finished:

The next month I want to focus on:

This is everything which need to be done before this project is finished, all the public stuff is over btw so now it depends on me or someone else who is crazy enough to help me somehow.
kind regards,

Since the last update a lot has happened, here is a summary:

So the long valley is the last thing before this project is done, this includes also some forest work.
hope this has given you a view of how the state is of this project. I intend to get this finished the week after next week because I am away from friday till friday, because of skiing in Austria.
kind regards,
-Creepy

After 3 months I finally finished this project, this is my largest project (which I finished) so far!
Thanks to everyone who participated in this project in any way, especially to my teacher @wheellee who did an excellent job, I couldn’t have done this project without him!
the stuff thats done are:

I would ask any overseer to check my work and if necessary give feedback.
kind regards,
-Creepy