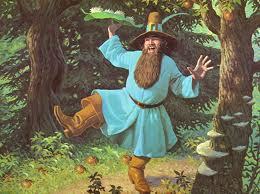 Tom’s house is one of the last lore-significant structures on the current map section, and therefore I think that a build competition would be most appropriate for a house which will undoubtedly be visited by many making their way along the Fellowship’s path in the future.

“The path was now plain before them, well-tended and bordered with stone. It wound up on to the top of a grassy knoll, now grey under the pale starry night; and there, still high above them on a further slope, they saw the twinkling lights of a house. Down again the path went, and then up again, up a long smooth hillside of turf, towards the light. Suddenly a wide yellow beam flowed out brightly from a door that was opened.”

There is a thatched roof on the house.

"[i]The four hobbits stepped over the wide stone threshold, and stood still, blinking. They were in a long low room, filled with the light of lamps swinging from the beams of the roof; and on the table of dark polished wood stood many candles, tall and yellow, burning brightly.

In a chair, at the far side of the room facing the outer door, sat a woman. Her long yellow hair rippled down her shoulders; her gown was green, green as young reeds, shot with silver like beads of dew; and her belt was of gold, shaped like a chain of flag-lilies set with the pale-blue eyes of forget-me-nots. About her feet in wide vessels of green and brown earthenware, white water-lilies were floating, so that she seemed to be enthroned in the midst of a pool.[/i]"

“[in the same room] the hobbits sat down gladly in low rush-seated chairs.”

There is also a “wide hearth” in the room.

“He opened the door, and they followed him down a short passage and round a sharp turn. They came to a low room with a sloping roof (a penthouse, it seemed, built on to the north end of the house). Its walls were of clean stone, but they were mostly covered with green hanging mats and yellow curtains. The floor was flagged, and strewn with fresh green rushes. There were four deep mattresses, each piled with white blankets, laid on the floor along one side. Against the opposite wall was a long bench laden with wide earthenware basins, and beside it stood brown ewers filled with water, some cold, some steaming hot.”

"[i]He drew back the yellow curtains, and the hobbits saw that these had covered the windows, at either end of the room, one looking east and the other looking west.

They leapt up refreshed. Frodo ran to the eastern window, and found himself looking into a kitchen-garden grey with dew. He had half expected to see turf right up to the walls, turf all pocked with hoof-prints. Actually his view was screened by a tall line of beans on poles; but above and far beyond them the grey top of the hill loomed up against the sunrise.[/i]"

There will be two phases to this competition:

There is no time limit on this competition.