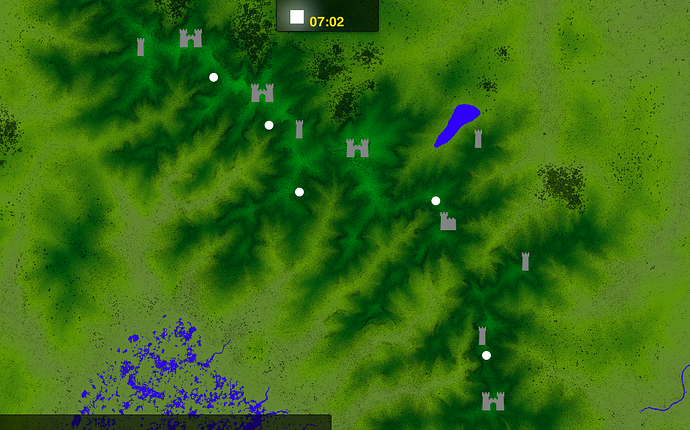 White dots are supply buildings for the castles, and towers with a side building are barracks.

From the ruining point of view:
Lore says “A great host came out of Angmar in 1409, and crossing the river entered Cardolan and surrounded Weathertop. The Dúnedain were defeated and Arveleg was slain. The Tower of Amon Sûl was burned and razed; but the palantír was saved and carried back in retreat to Fornost”. This suggests Angmar’s forces swung through Rhudaur, across the Mitheithel, and attacked Weathertop from the south east. So I would like to have the castle and towers near to Weathertop be as destroyed as the latter, while the northern ones to be far more intact, similar to Guan’s castle, because instead of being attacked they would have been abandoned due to the plague, or simply because they were not valuable anymore.

Also, Guan’s example fort has been pasted in.

Updated project post with map and comments on ruining.

Concerning the supply buildings, did they need some kind of defense like walls or small guard posts before being ruined ?

Nah, those would be on the protected side of the hills so wouldn’t need their own defences.

Considering your very detailed and useful post on the topic of Arnorian ruins, would love to have your view on progress so far and any suggestions. @YouJusGotSarged

People are building supply and storage buildings on top of the hills, the very frontline itself. This makes absolutely no sense at all. They would either be inside the castles and fortifications or along the road behind the hilltops.

Agreed. Not rlly sure who the “people” are, but I’ll remove them and place them where they should be.

@Natanyagrad the supply building layouts are tiny, considering they’d hold supplies for hundreds of men. They also could have been used as shelters and barracks, so you should re-evaluate their size.

Alright will do. If you have any pictures as inspiration for what you think they should look like post away. Also as guan pointed out it wouldn’t make sense for them to be on top of the hills or on the “front line”, so their location will most likely be revised to push them back a little and make sure they are on the path or at least on the path to a castle.

The supply buildings could use a small guardpost and curtain wall themselves if they’re along the road.
Ofcourse most of them would simply just be inside of the castles.

This project has been going for too long. Can you finish this weekend @Natanyagrad? Thanks to Ori, whee and Guan for the help.