As most of you know already, this is going to be a rohan settlement built among the ruins of a gondorian town, which we assumed could have been the capital of the Calenardhon provence back in the day. This is going to be a complex project, combining the building skills of rohan and ruins making, as long as needing some creativity to realisitically merge them together.

Side projects: contact us to claim them and receive important additional instructions. Once you’ve successfully claimed them, make a post in this thread with some informations about your plan. We’d prefer if these side-projects were co-worked by two people, especially if this is one of your first times leading something independently, as they require some planning and concepting beforehand. 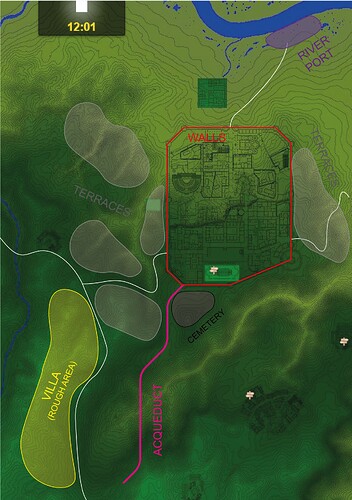 The rohan town is still being planned. The cocepts both for the rohan buildings and the ruins as being refined. As soon as they are completed the lower part of the city will open, stay tuned.

The LOWER PART of the town is OPEN for building. There are only 7 POLs to do in this section, but there will be many more to come in the upper part of the town. The guide we provided for the town does not cover the rohan house making or the ruins making in detail, you’ll have to check their specific guides if you have any doubts about them.
If you’re interested, from now on you can also contact us to lead one of the side projects outside the town.

Alright gents, at this point there’s only a few major ruins left to be done:

I’m also willing to let people make tests in freebuild for the walls and the main hall. Please refer to Nana’s history document, and message me if you have any other questions.

In other news, I’ve decided to name this town Rondgeld. Originally it was called Rondegil, Sindarin for “Hall of Victory,” honoring the defeat of the Wild Men of the region. After its abandonment the meaning of the name was forgotten, and eventually the name itself was “Rohirricized.”