Lore: “They came on unexpected valleys, narrow, with deep sides that opened suddenly at their feet and they looked down surprised to see trees below them and running water at the bottom. There were gullies they could almost leap over, but very deep with waterfalls in them. There were dark ravines that one could neither jump nor climb into. There were bogs, some of them green pleasant places places to look at with flowers growing bright and tall; but a pony that walked in there with a pack on its back would never have come out again… the path was marked with white stones, some of which were small, and others were half covered with moss or heather… Bilbo’s pony began to stumble over roots and stones. They came to the edge of a steep fall in the ground so suddenly that Gandalf’s horse nearly slipped down the slope… down and down. The trees changed to beech and oak…”

Overhead plan:Plan is to just do it. Everything is already laid out, we just gotta refine and shift stuff. I was thinking and it came to my mind there is a problem with Rivendell and the way it is pictured on our server (yeah, WIP, I know, but still). The thing is, though, it is not really our fault; no, actually the current Rivendell might be one of the, if not the most faithful to Tolkien build of the map. The problem is actually in the lore itself, some kind of apparent contradiction: Imladris is never described as fortified in any way I can think of, nor does it look anything like that in Tolkien’s drawings; moreover, it is more than once called “the Last Homy House East of the Sea”, which does not really scream fortress.
However, Imladris have been twice besieged: the first time during the war in which Sauron destroyed Eregion and the second by the forces of Angmar. The question is thus: how did Rivendell withstand those sieges? Yes, you could simply answer “elven magic, bitch”, but it would be frankly poor thought, lazy and uncreative. Furthermore, it would go against the realism focus of ArdaCraft.

There are in my opinion two ways to solve this apparent paradox. One is to fortify it regardless but to try not make it look too much like a fortress. It’s the path chosen by the movies and, for me, they did a great job; however, in ArdaCraft’s case, I think it would ruin the amazing atmosphere of the place along with its state of almost perfect recreation of Tolkien’s drawing.
The other is to fortify the valley itself. Not necessarily in a “classical way” (walls and gates), it could be done in a more guerilla-oriented approach: put hidden, covered in lush elven shooting posts, caches at every entrance to the valley, in the cliffs along the road, in the woods, in the moors around the valley … in short, wherever you think it would make sense. Add to that the fact the map is not at 1:1 scale (in reality, Rivendell could be way smaller compared to the whole valley, and there could be hundreds of those places) and, yeah, elven magic (nothing wrong with using it, it’s a fantasy world after all, I just don’t think it is a good thing to use it as a 100 % solo logicproof wall-type answer especially in Tolkien’s universe), maybe similar to what was witnessed by Bilbo in Mirkwood, and I think you have the best and most lorewise solution possible to the problem of the Hidden Valley.

On another hand, if I can suggest some simple ideas that, I think, would look cool:

Adding at least one kiosk in the cliffs like the one visible on the freebuild version of Rivendell - I think it looks really beautiful and makes an amazing viewpoint, plus it can also be used as one of those shooting posts. Maybe this one was planned, I don’t know, but just in case.

Making this section into a bridge by slightly digging the cliff under it to the background - I think it would add more majesty to the path along with enhancing its vertiginous aspect. 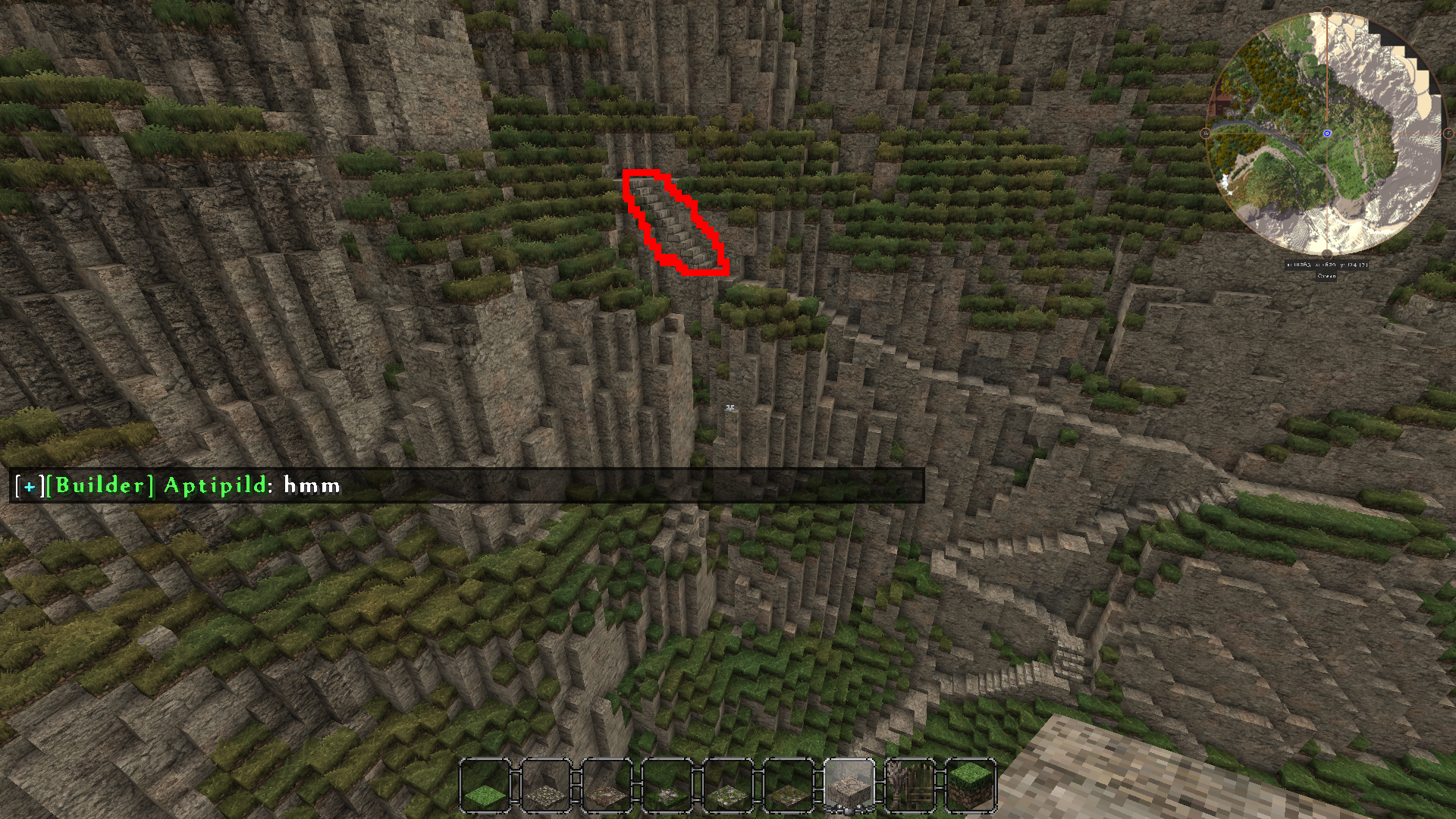 Maybe adding a horse statue against the cliffs on each side of the Bruinen where it joins the Mitheithel, Argonath-style but way smaller and half covered by vegetation. It would mark the entrance to Elrond’s domain and a symbol of his and Vilya’s power over the river as well as a small nod to Gandalf’s water horses.

‘Maybe adding a horse statue against the cliffs on each side of the Bruinen where it joins the Mitheithel, Argonath-style but way smaller and half covered by vegetation. It would mark the entrance to Elrond’s domain and a symbol of his and Vilya’s power over the river as well as a small nod to Gandalf’s water horses.’

Rivendell’s sheer location would be enough defensively. The high moors, if put in 1:1 scale, would essentially be impossible for any large army to traverse in a reasonable amount of time due to how many ravines, bogs, sinkholes, and rapids riddle the countryside there. On top of that, even to the time frame of LOTR, the Enemy did not know the exact location of Rivendell, just its general area. Their army would be constantly shooting in the dark, hoping to find the valley but not finding it. By the time they found the valley, the elves could have easily just ambushed them along their route so the force is whittled down to a smaller size that could be easily taken by whatever soldiers Elrond has at Rivendell. This is just what I think as of right now, but I’ll leave the discussion open so others can put forth their opinions.

‘Making this section into a bridge by slightly digging the cliff under it to the background - I think it would add more majesty to the path along with enhancing its vertiginous aspect.’
-> already planned, just not for the main path, but a side walking path that just goes to a sitting area.

‘Adding at least one kiosk in the cliffs like the one visible on the freebuild version of Rivendell - I think it looks really beautiful and makes an amazing viewpoint, plus it can also be used as one of those shooting posts. Maybe this one was planned, I don’t know, but just in case.’

->I might add it, but as of right now I don’t want to spam too many gazebos in Rivendell. I already have two as is.

The problem is that it is said to have been besieges, which would assume they found it, at least twice, since besieging the whole High Moors doesn’t seem really believable, even with an army as large as Sauron’s. The whole valley on the other hand seems to me like an acceptable compromise. And aren’t the shooting posts I proposed in this ambush spirit?

-> You are right for the statues.

-> I actually don’t know how you managed to answer to the path suggestion since I miserably failed to include the picture of the location in my post x) . Should be fixed now.

The valley cannot be entered by a large army because the few entrances force them down to a single file. Think of the 300 Spartans - numbers don’t matter in a bottleneck. The orcs could have made assaults, but even with a few elven warriors the entrances could be held.

You could even imagine that during those times small fortifications were constructed at the entrances.

Sure but the problem is that every entrance to the valley goes down quite a bit, so the positions are extremely favorable to the attaquant army since they can shoot the Elves from the top of the cliffs, or simply throw rocks at them.

You literally said yourself that the valley would be much bigger in reality. Why couldn’t they build defenses at the ‘passes’ and then be safe in the house itself? I’d like to see a medieval weapon that was effective across something the size of Lauterbrunnen.

Regardless, it’s been more than a thousand years since the last siege, so any fortifications the Elves might have made would be gone.

Not shooting at Rivendell itself, simply at the force trying to block the orcs from entering in the valley.

Like I said, they could have set up defenses roughly where the Rivendell warp is. Then they’d be at the top of a slope.

Was talking to whe about this last night and I agree with Fornad. The few times Rivendell was besieged they would establish temporary defenses like a moving army might. Pallisades and ditches or smthn, fortifications to the passes that would be taken down or deteriorate. Certainly not anything that would last until the time the server is set. In fact the first time Elrond fortified the valley was when he was leading a force into Eregion (or so tolkiengateway says?) so a moving army with a temporary camp. Furthermore, as whe says, part of Rivendell’s biggest defense is in the fact that it’s hidden and remote. If an army was going to attack Rivendell they’d most likely have scouts that would give them notice, and they would probably lead sorties as the army moved through the land (actually kind of similar to what happened in the Hobbit movie?). Rivendell was never really meant to be laid siege to like a proper castle, i always thought of it more as a hidden refuge, kind of similar to Henneth Annûn, just with a permanent settlement.

One thing that might be interesting to add is hidden caches or camping spots for scouts or rangers.

Rivendell is now complete. Absolutely fantastic job by @wheellee, @jacenpeter, and everyone else who worked on it - it is undoubtedly one of the most beautiful creations on the server.

Can’t wait for our audiobook nights there 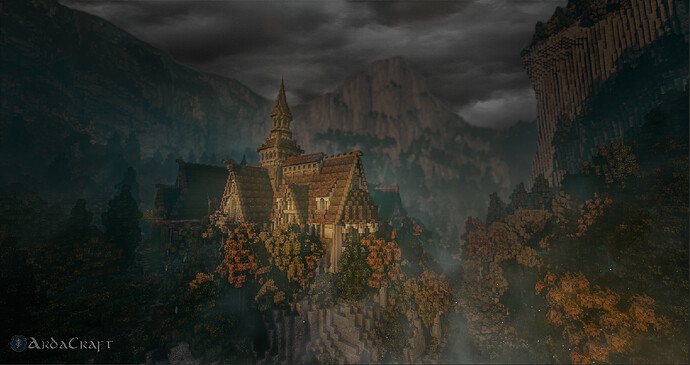