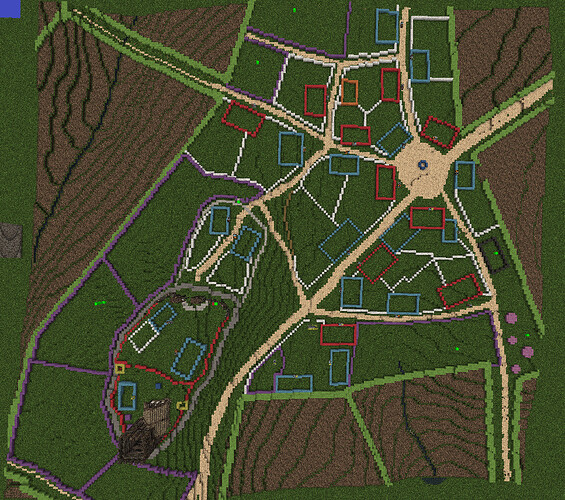 FV3 PLAN.jpg967×855 764 KB
Village: The village will consist of 20 houses making up a population of 105 people. A majority of the population will be farmers and will have their house located on the outer region of the village. Moving inwards towards the square the houses will have dedicated industries including: Blacksmith, Tailor, Carpenter, Inn, and a cooper.
Towards the south side of the village I intend to build a cidery to give the village a specialised industry with a substantial orchard adjacent to it. It will consist of the owners house, a few presses, a fermentation room and a storage room (hence the cooper in the village).

Fort: the fort will be similar to those already made in Rohan with a timber keep and palisade/ditch surrounding them. On the map the dark grey indicates where a deeper ditch will be and the light will be a shallower ditch. The population living with the fort will be in the region of 15-20 people.

Yards: Each house has a yard, for the houses that have a dedicated trade the yard will be used to facilitate their work with a smaller portion left for subsistence farming. All other houses with yards will have small veg farms and what-not.

In-game guide: The village falls within the style 2 section, mudtone will be the primary foundation and plaster the walls. Logs should start becoming less common here as well. Eaglz example houses: 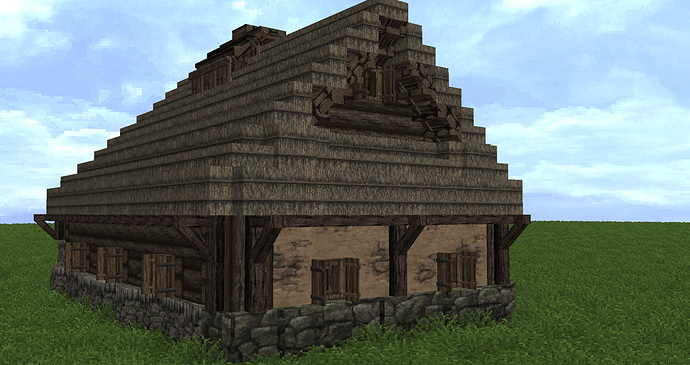 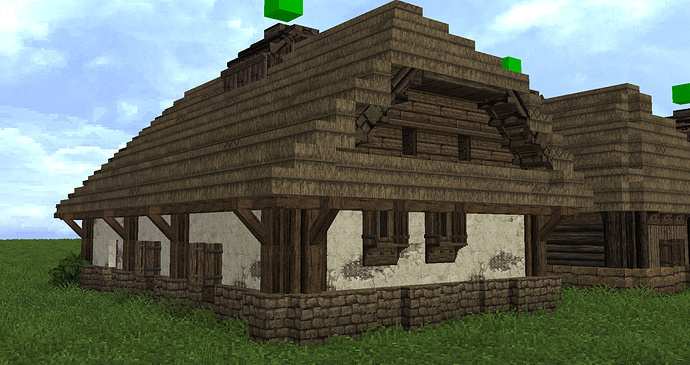 Terrain: Not much work needs doing to the terrain, in some areas I may alter the hill slightly to make it less assailable but not much more work is needed 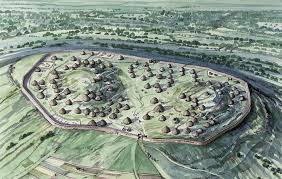 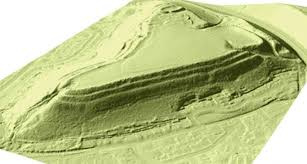 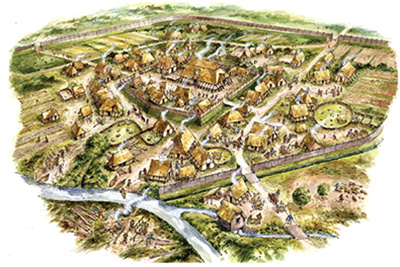 Timeframe: Whatever Eaglz feels is appropriate, I intend to get this done over the Christmas holidays with the help of BIG DICK ENERGY. So 2-3 weeks seems like a good estimate of time for this one. 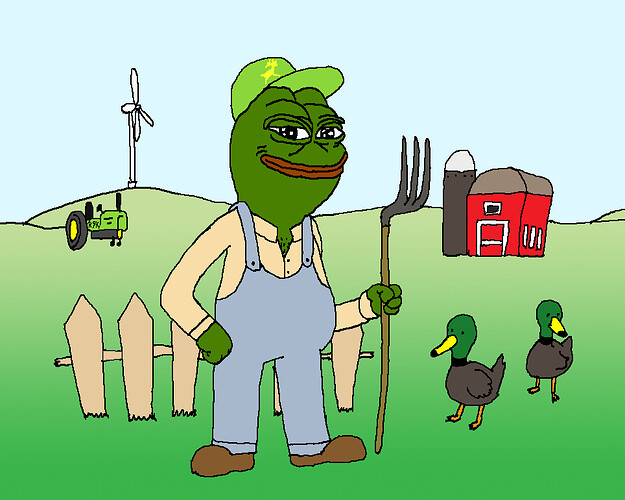 Overall great, the only thing I’d like to see some revision on is your layout. What you’ve added in regards to industries and what not is fine, but the way you’ve spaced out the houses needs some rearranging. I think your main fault and where problems will certainly arise in the future lies with your road placement. So far you’ve followed the preexisting WP roads which is fine, but I should add that you can certainly feel free to change the road placements if it helps your layout, as long as they still ultimately lead to their destinations outside the village. This is the case in village 3, the current village 3 worldpainted roads look like some kind of retarded sun so what I’ve done is I simplified the roads for you. I added some houses that follow the linear directions of the roadsides (something you should almost always try to do outside of special circumstances). The space behind the houses is what they’d use for their gardens and vegetables, in this space it’s a good idea to add little shacks and sheds which is what I’ve drawn up in the smaller red. 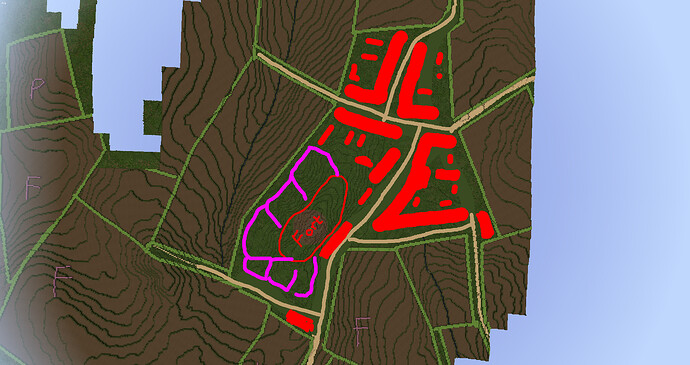 This way you can clearly see the houses following in some kind of order and organization. I notice that you’ve already applied this to a small degree which is fantastic, but the roads really hinder it and make the houses appear more muddled and broken up. Another thing i’d strongly advise is to use diagonals at every opportunity where the road is diagonal, and regular houses where the road is straight. Even if you need to plan an entire row of diagonal houses then that’s fine, we need to make compromises between small and far distance viewing. They’re also pretty easy to do and can look great if done right, ie. homestead 1

Reference image for your village: 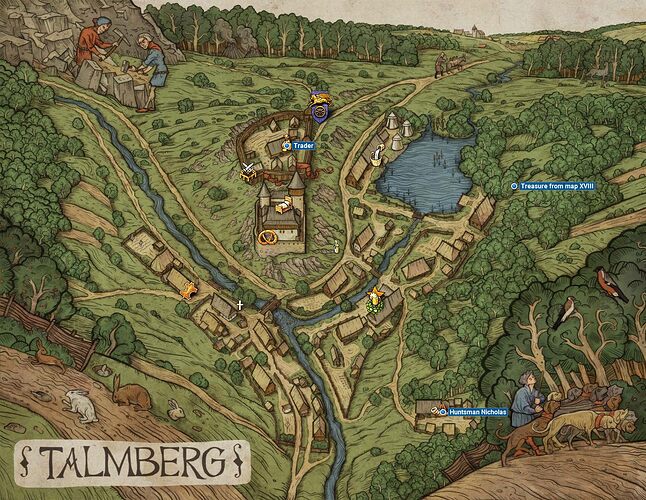 Your timeframe looks good to me, so until the first or second week of January is your deadline, don’t forget to harness the D R A G O N E N E R G Y in your efforts.

Bit of a long write up but this village is basically the centerpoint of the western Folde, and it’s always good to start off with a dank ass project that people can use for their own stuff. Granted that you apply the points I listed, then the project is accepted and can be started, you may as well do the planning at FV3 itself.

I agree with you on this, they way I layed out the houses lacked order and reason behind it, your example seems to flow better than what I suggested so i will use your proposed layout instead.

Had a look around the plan you’ve laid out, everything looks good to me. The fort hasn’t been fully planned yet but I’d rather not bottleneck the project to this small detail. Unless @MicahVanderman has something more to add then I’ll give you the greenlight and you can begin building. Good job.

Yep thought it looked great Nameless, excellent job. Looking forward to seeing what you can do. Good luck!

Folde Village 3 is now (from what I can see) done, thanks to Kisk, Unicorn, Phil, Banana, Law, Beat, Ytsen, Whickery, Fishy, Radius and Skaj for helping to get the village done as well as Poppel for his work on the fort and Lind for help with the cidery.

By the brewery or cidery, maybe put this? https://alanbutcher.wordpress.com/books/early-inns-and-alehouses-in-britain/

(this is confirmed by some other sources so its p. accurate)
a pole w/ a bush into the road signifying a brewery/cidery or smth, idk if they would have it for cideries or not but it would be a neat touch.

Sure can be added just outside the wall of the cidery