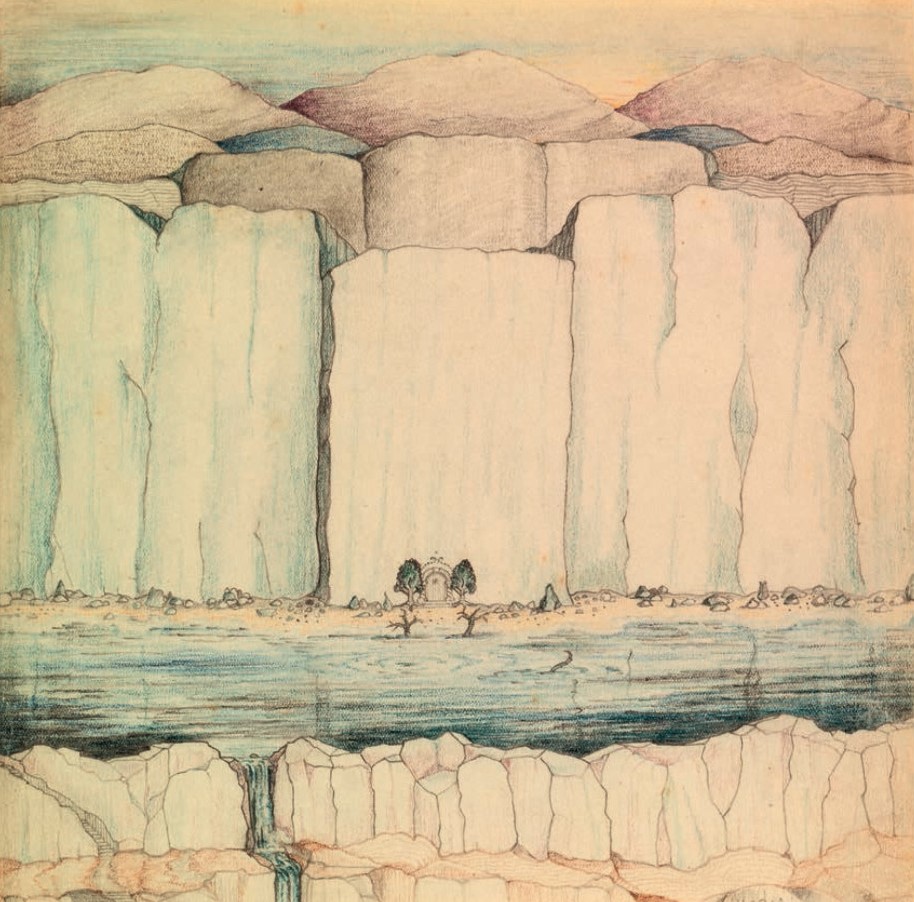 Leader: Soap889 (under Guan and Sunwing as Moria overall leads)

Welcome to Moria. It’s finally begun, and we’re beginning on the West Side, with the beginning of the path of the Fellowship through Moria.

Lore: When Moria was inhabited, the West End would likely have just been a mining colony with only temporary residential capacity, as opposed to a fully populated area. This is a distinction that big man Gandalf himself makes upon reaching the 21st Hall in the East End, saying he believed they had now reached the ‘habitable parts’ of Moria.

It might not even have been a very active mining colony, since the Dwarves of Moria eventually reached a point of being so wealthy that they didn’t need to mine for any iron or gold or anything - they could just buy these from men. The only truly active mines in the whole of Moria, until the Balrog came, would have been the Mithril mines under Caradhras, the source of their immense wealth.

As such, the West End is the most ‘low class’ and least-developed part of the kingdom, as far as Moria can be low class. However, the West End was also the main route through which the Dwarves could make contact and trade with some of their closest allies, the Noldorin Elves of Ost-in-Edhil. As seen in the Doors of Durin, this had an effect on their architecture as Elvish designs influenced their stonework, and the West End would have seen this as well.

On that note, here is the epoch system for Moria, as it applies to the West End.

Epoch 1: The period immediately after the settlement of Moria. Mostly limestone and minimal decoration. There are no Epoch 1 areas in the West End, because it did not yet exist.

Epoch 2: The period after the end of the First Age and the War of Wrath. Broadbeam and Firebeard refugees from Belegost and Nogrod come to live in Moria and affect its architecture with their experience working with harder stones in the Ered Luin and their more technical style that resulted from that. The beginning of Schist and red granite in Moria’s architecture. Most of the West End is Epoch 2.

Epoch 3: The period encompassing the contact and trade with the Elves of Ost-in-Edhil. This is the beginning of true rounded arches in Moria, among other smaller design elements that make Epoch 3 areas look a little more Elvish in appearance. Parts of the West End, including the Main Road, are Epoch 3.

Epoch 4: The period after Ost-in-Edhil and Eregion are destroyed by Sauron. Moria is sealed off at this point, and architecture begins to prioritise defensibility and practical purpose over beauty (guardposts, the bridge at the 2nd hall, etc). The West End would not have seen any development at all after this point, so very little Epoch 4 stuff.

If you want more lore, see the lore doc.

Here’s what the West End roughly looks like, facing east: 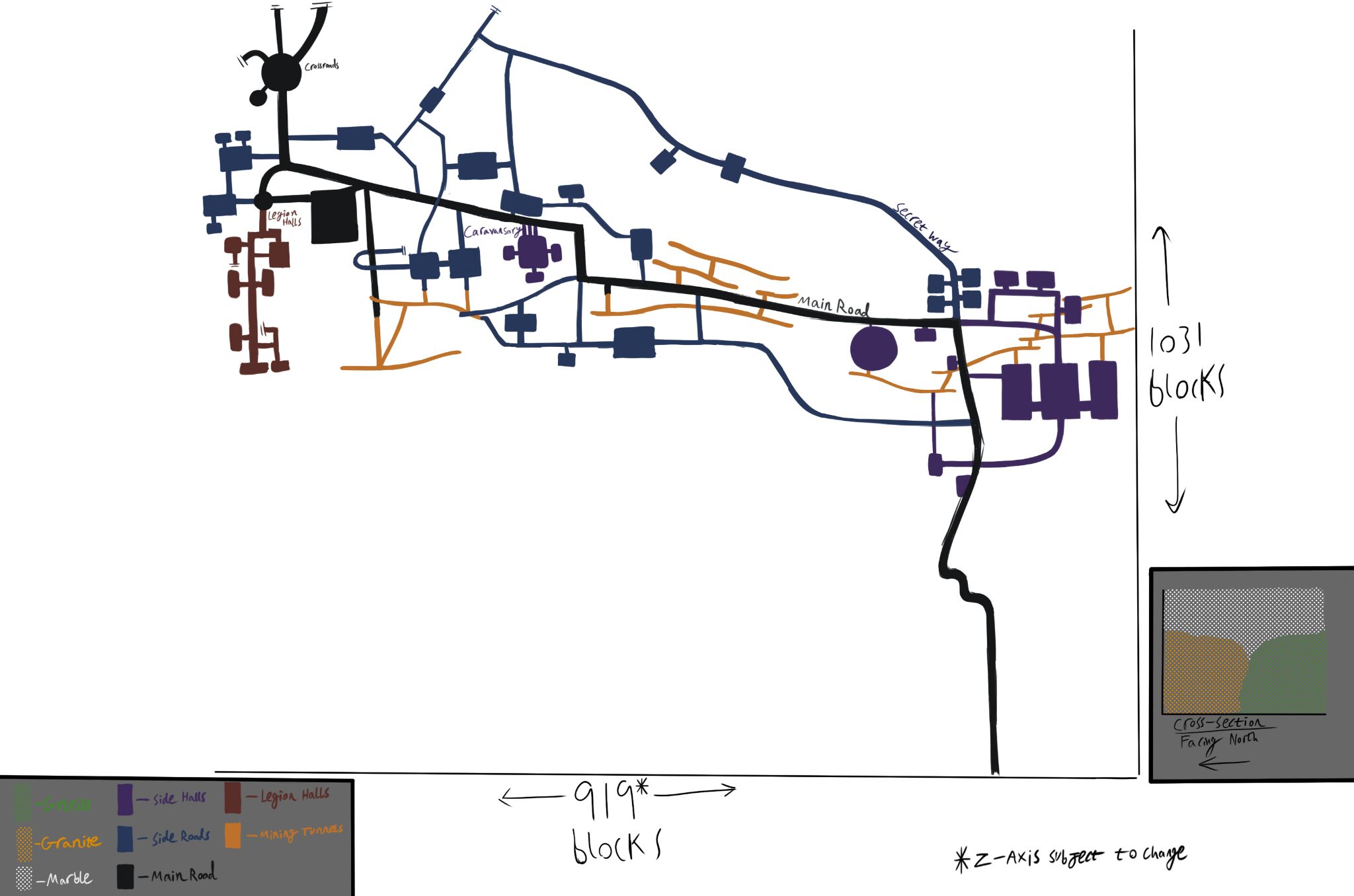 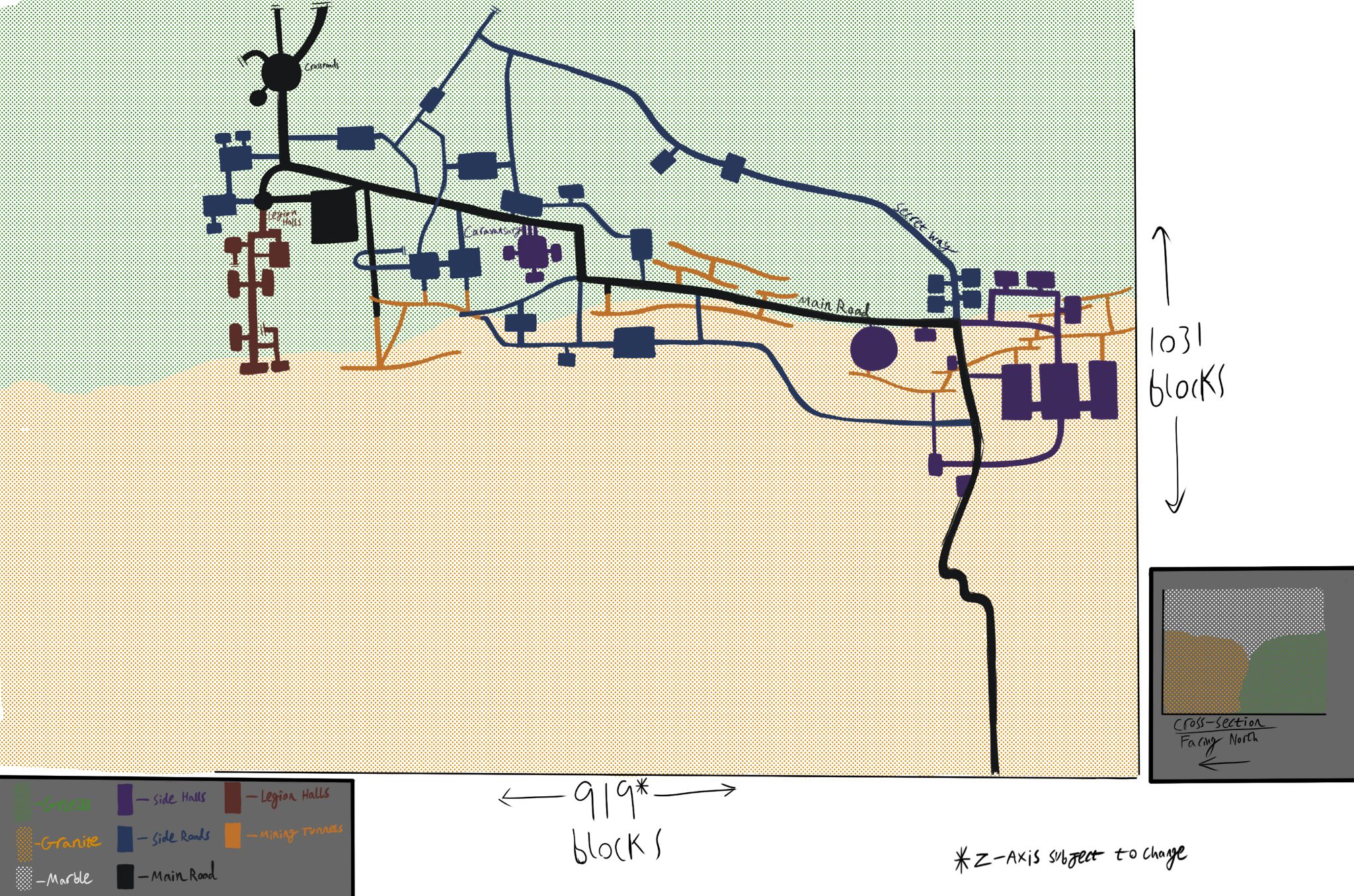 And here is the West End separated into sections: 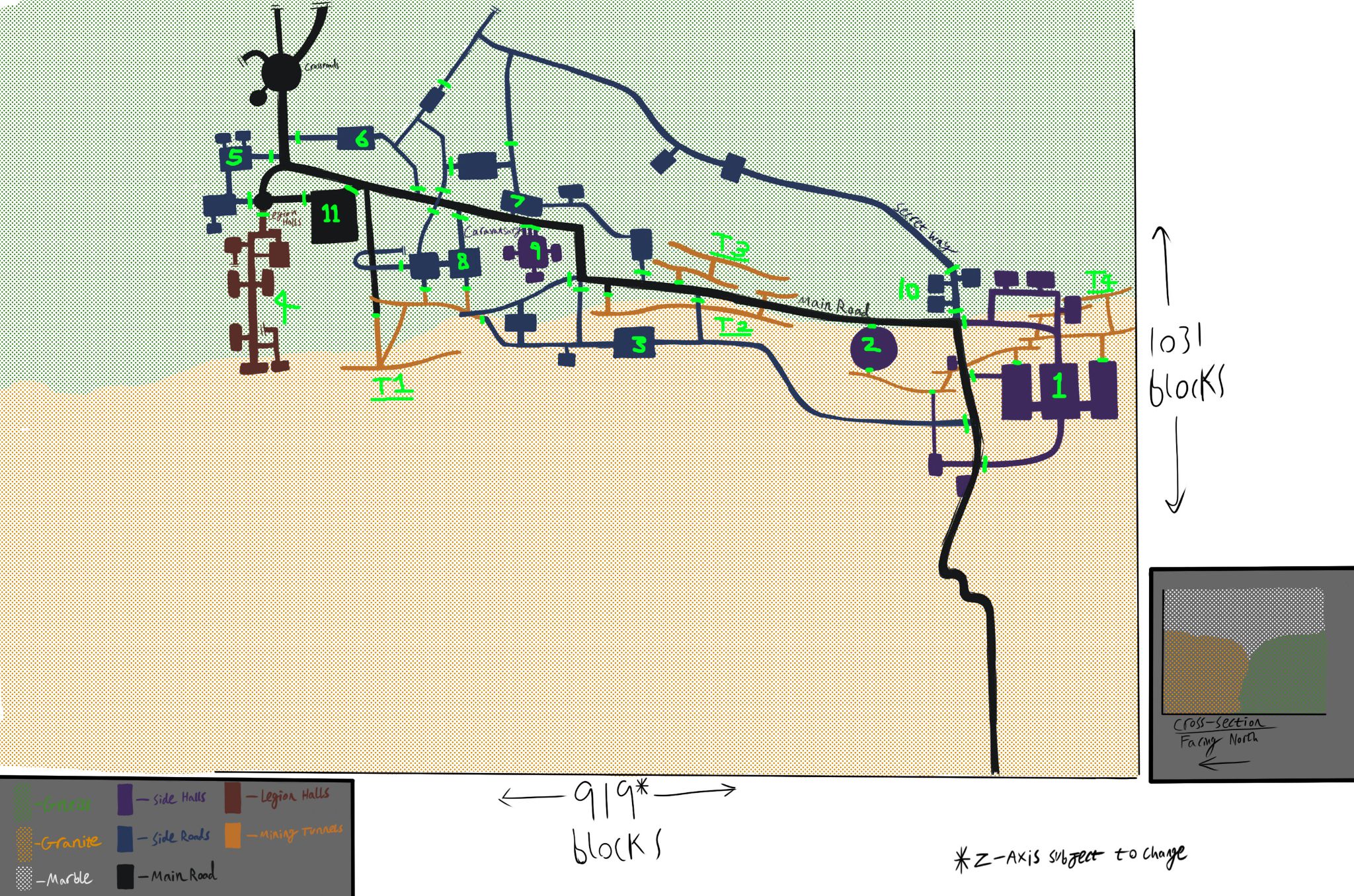 The two main rock layers you see are granite (orange) and gneiss (green). These two layers are pressing into each other, and the high pressure between the two produces a thin band division where high concentrations of ore deposits exist, mostly iron. This is the reason that most of the West End is organised around the division. There is also a superseding layer of marble, which some of the construction runs through.

Granite is an igneous rock. It is cooled magma, and has a hardness rating of 6 on the mohs scale. Gneiss is metamorphic. It is limestone crushed to higher densities by moving tectonic plates. It has a hardness rating of 6-7. For comparison, marble is made of calcite and is much softer, with a hardness rating of 3. This means that the marble areas, as well as areas lying on the divisions between rock layers, are much more susceptible to ruining and crumbling, and will likely look much worse than the granite and gneiss areas. That being said, it has been a thousand years, and the rock itself has been moving in that time. While there isn’t much erosion or complete collapsing of tunnels, there will be large cracks and shears through the stone.

Collections of halls and corridors off the Main Road have been separated into 11 sections, which will be given to individual builders who want to do them, or who I want to do them. Instructions and guidance are on the server, in each section, but some detail will be included here. The dimensions of the halls you find in your sections are the maximum size those halls should be, but you can alter them in the way of making them smaller, and by no means do you need to stick to the layouts I’ve provided.

These are the sections that are available to build: 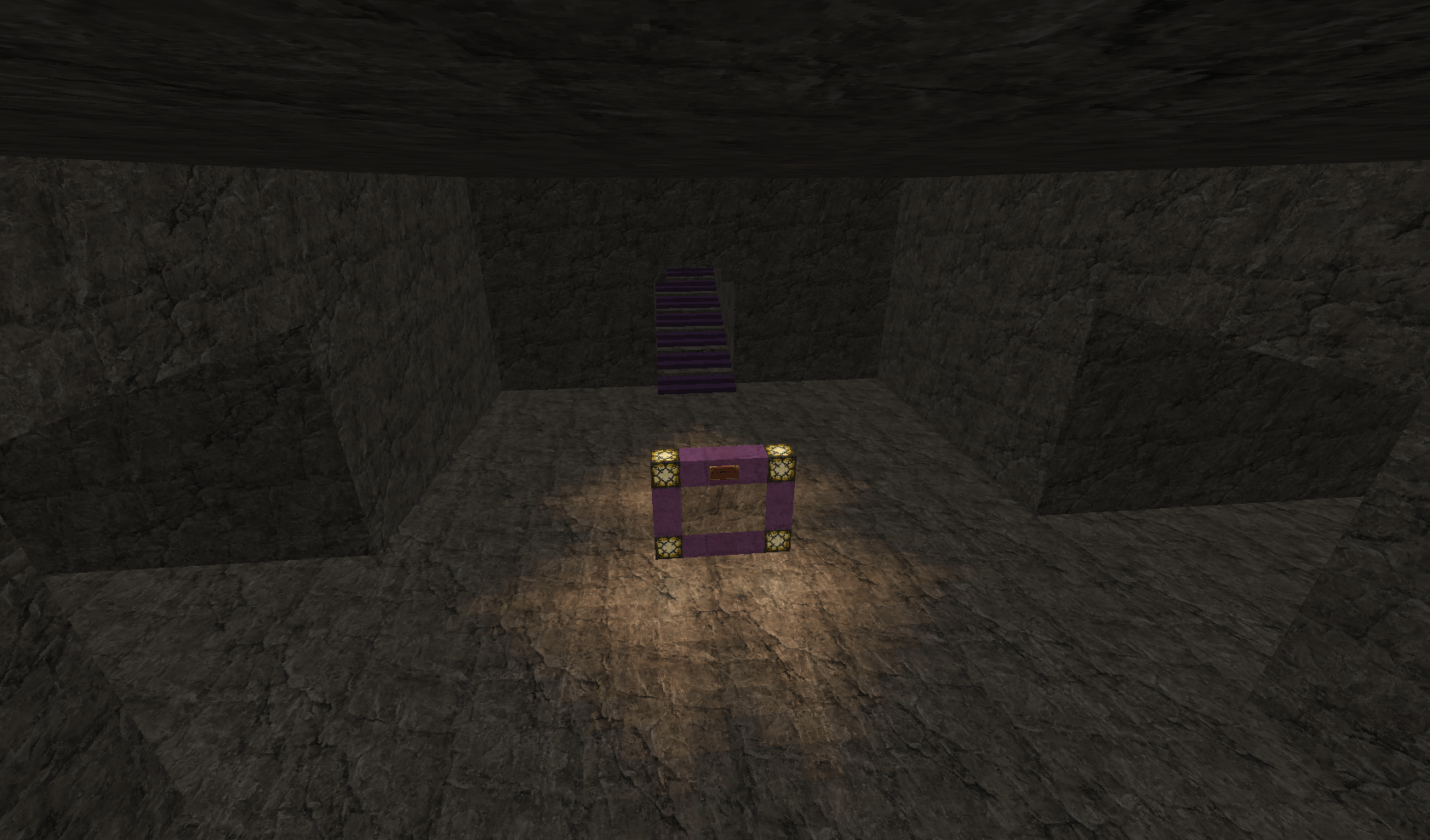 The new mining storage hub (“New”). It is three large halls connected by wide ways that would have contained storage, administration of mining activities, and some temporary residential housing for the miners working in the tunnels. Also includes some storage halls on an adjacent path. 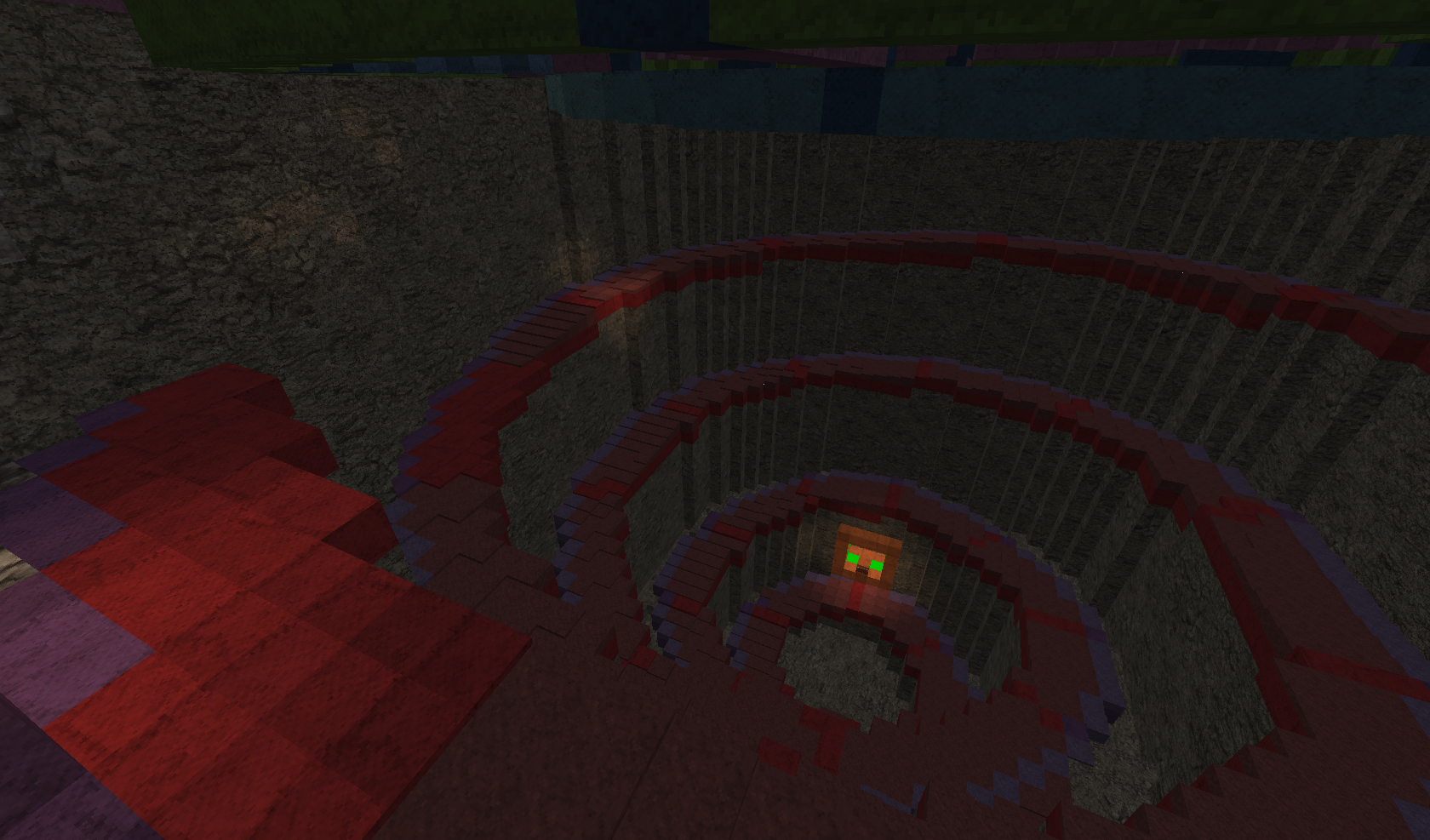 An immense spiral quarry cavern that would have once also served as access to a lower layer of mining tunnels. If you really want to do this, then fine, but it’s a complex concept that I kinda want to finish myself. 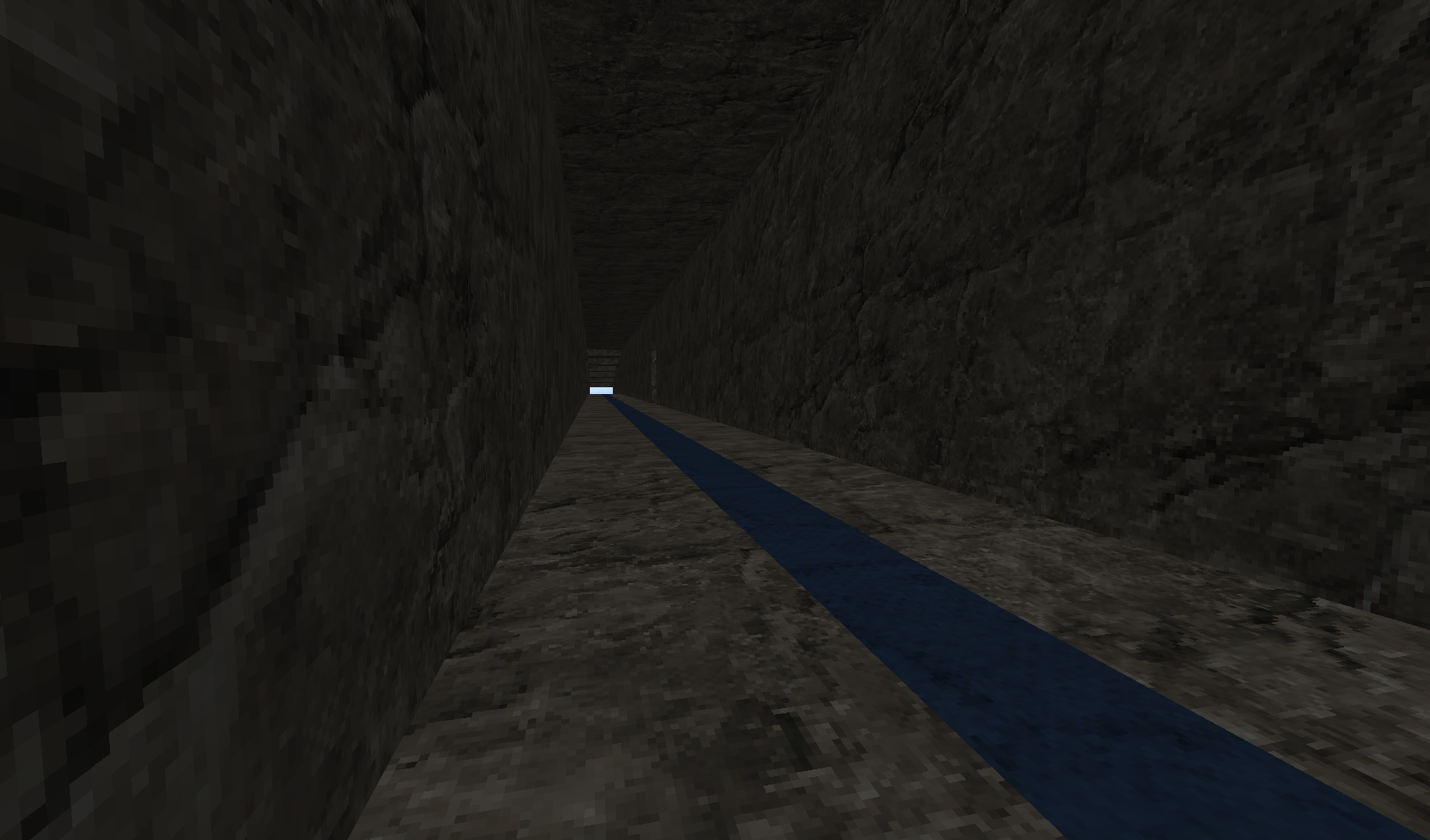 A once-practical side way that carts carrying ore from the mining hub and tunnels in the south would go along to get to the Crossroads in the north of the West End. This was not fancy at all, it was a road miners and couriers would use to avoid the trade traffic of the Main Road. This is probably one of the largest continuous sections in the West End, in terms of square footage, but most of it is corridor. 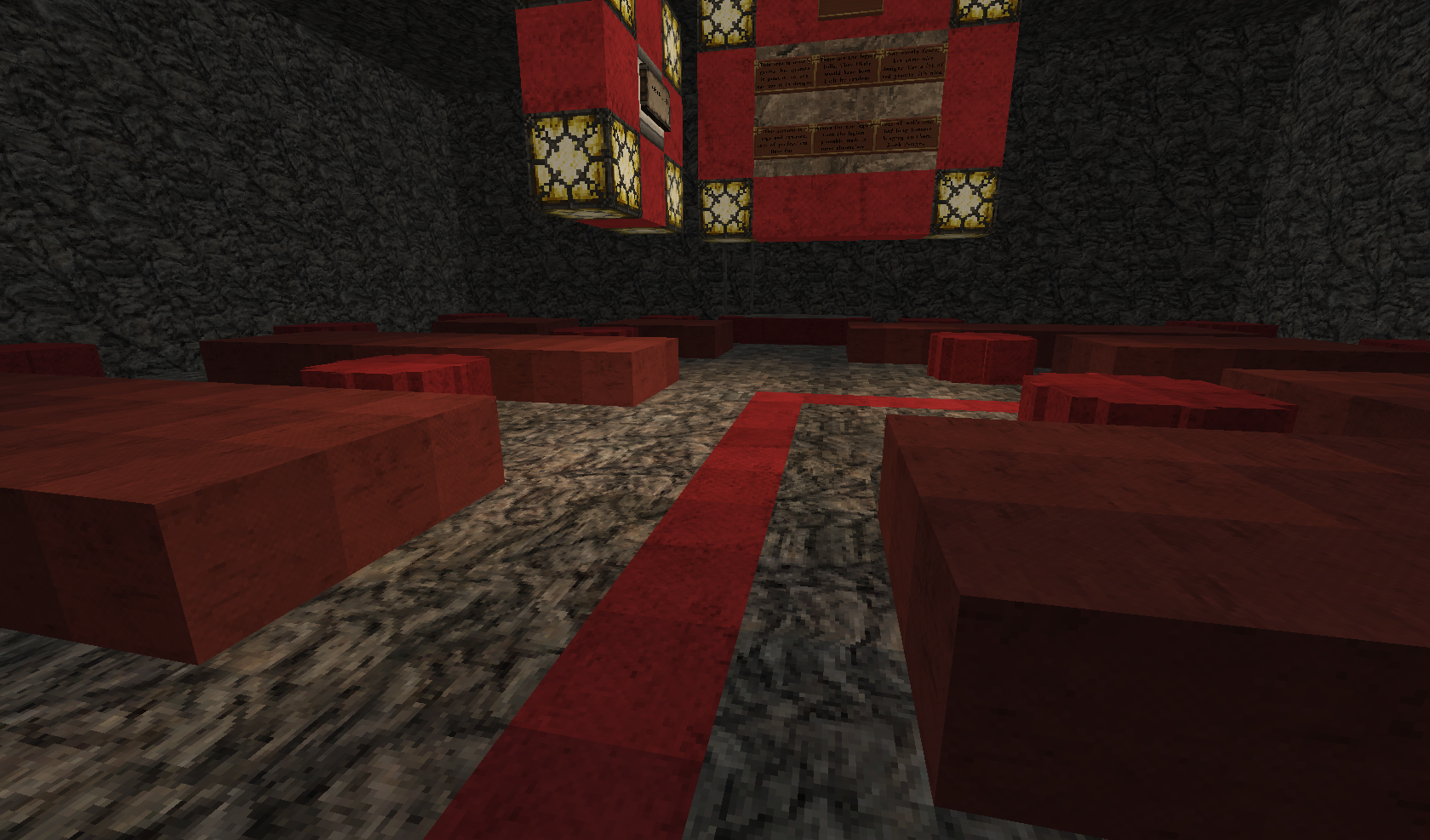 A large series of halls for the housing, training and fielding of the 5th Legion of the Dwarven military. Present in the West End for the purposes of defense, especially after the rise of Sauron in the Second Age. The Legion halls would likely have been pre-dug for the legion and then decorated afterwards by legion engineers. This means it has the potential to look very different from the rest of the West End, much more complex and pretty. Try lots of red granite. 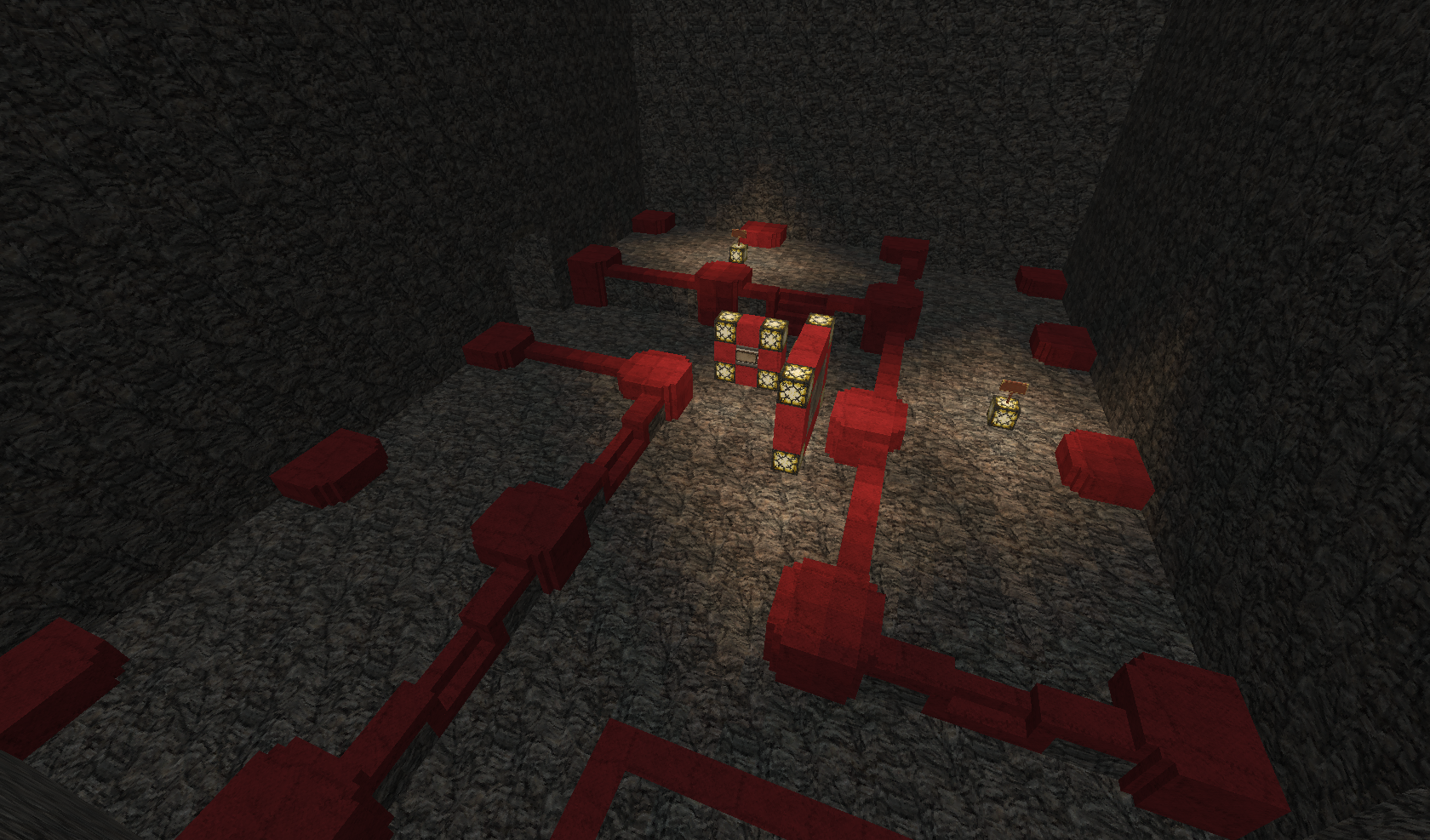 The Northern Halls are a collection of two large-ish halls and connected storage rooms. It includes a training hall (pictured above) and an equipment workshop. They are associated with the Legion Halls but are not part of the main complex. These would likely look very similar to the Legion Halls, so whatever design that has, this would probably mirror it. 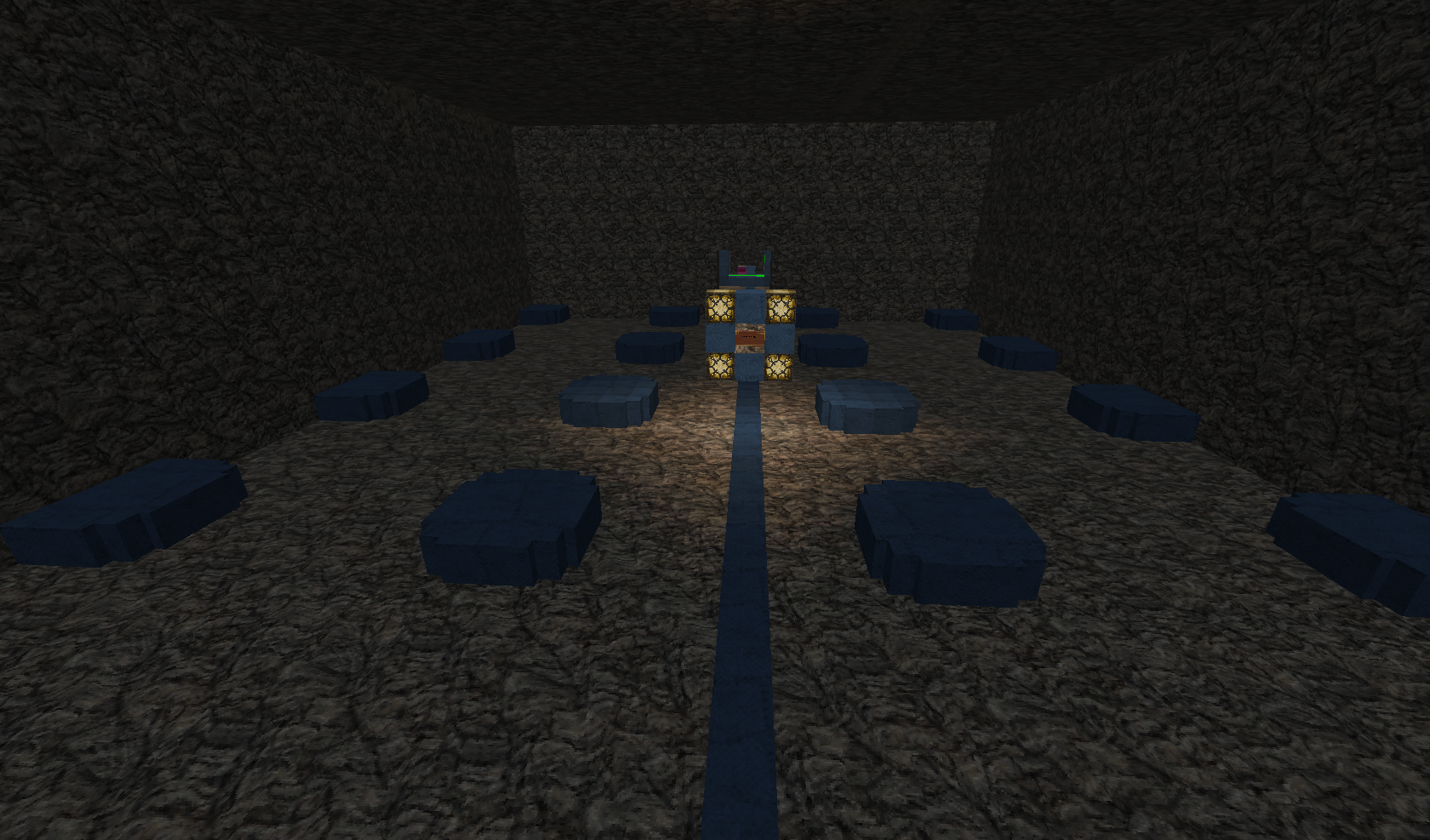 The first part of a sprawling complex of halls and corridors in the northern half of the West End. This hall complex has been cut down into three bite-size sections for builders to tackle, Hall Complex A, B and C. This first one is simple, but complex enough for some engagement. 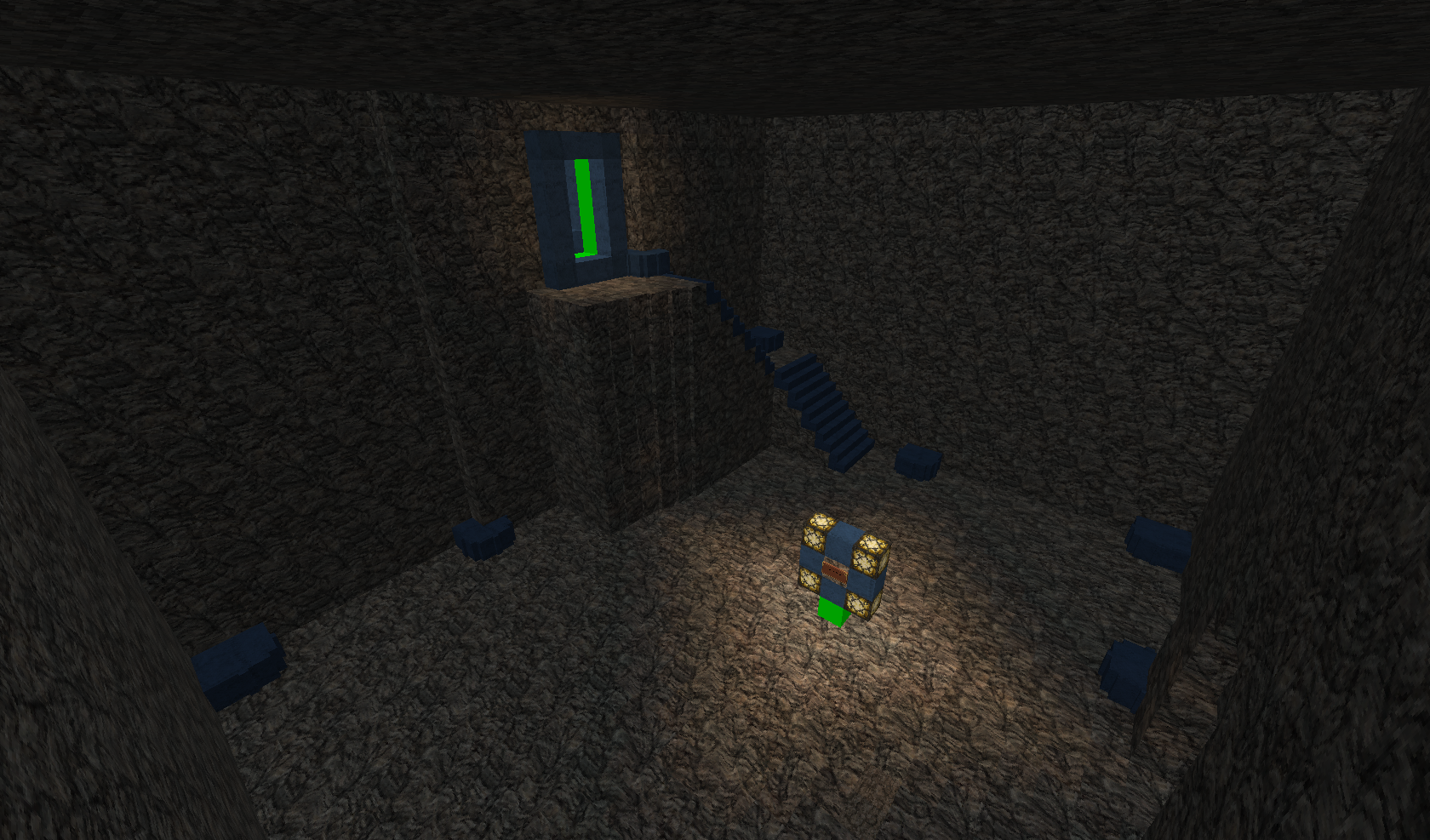 The second part of the hall complex. The largest of these three sections. It includes a diagonal hall! How exciting. 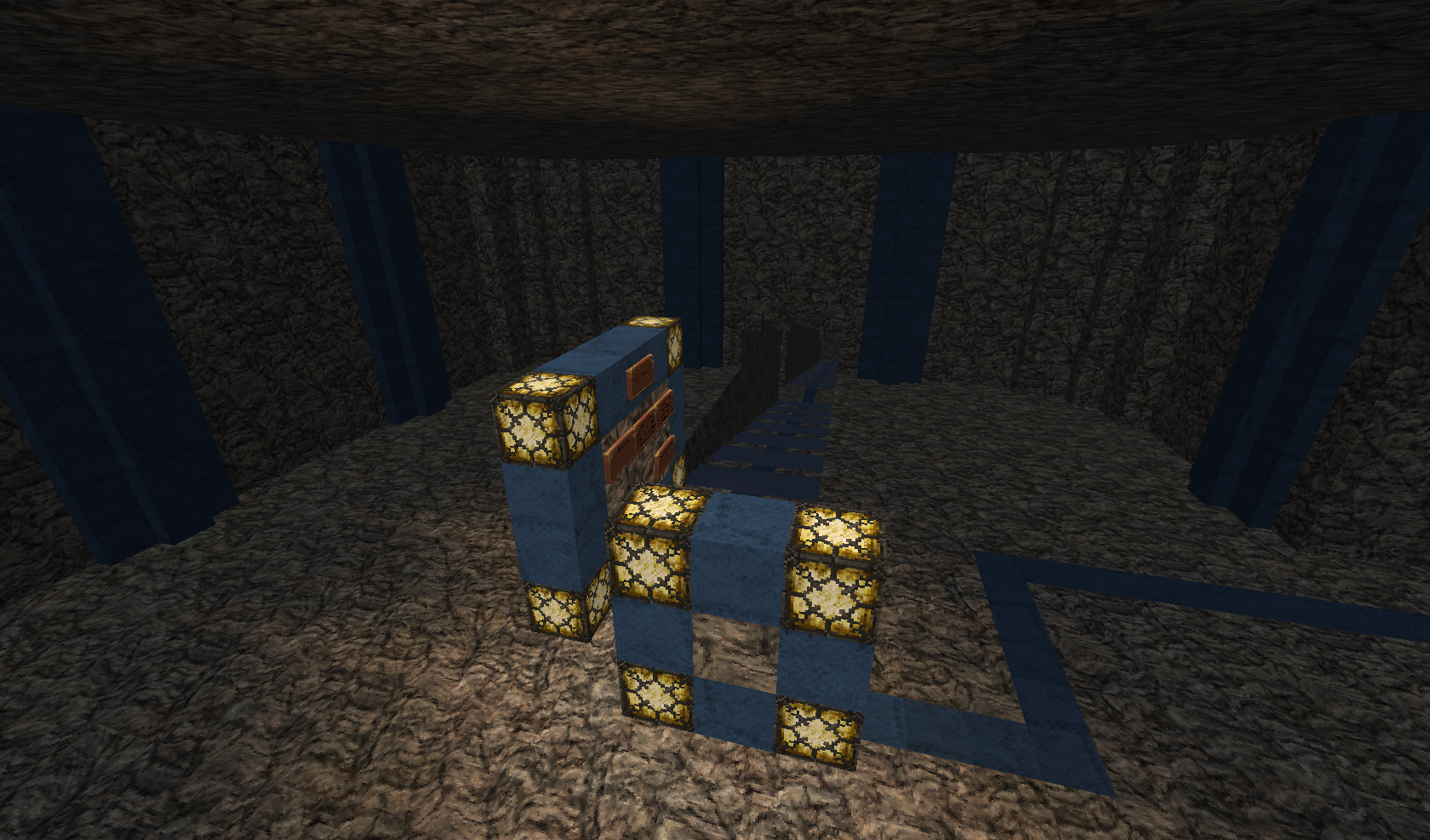 The third part of the hall complex. It includes two debris storage halls and a miners’ residential hall. Not too exciting. It does, however, include the third longest staircase in the West End. Capital. 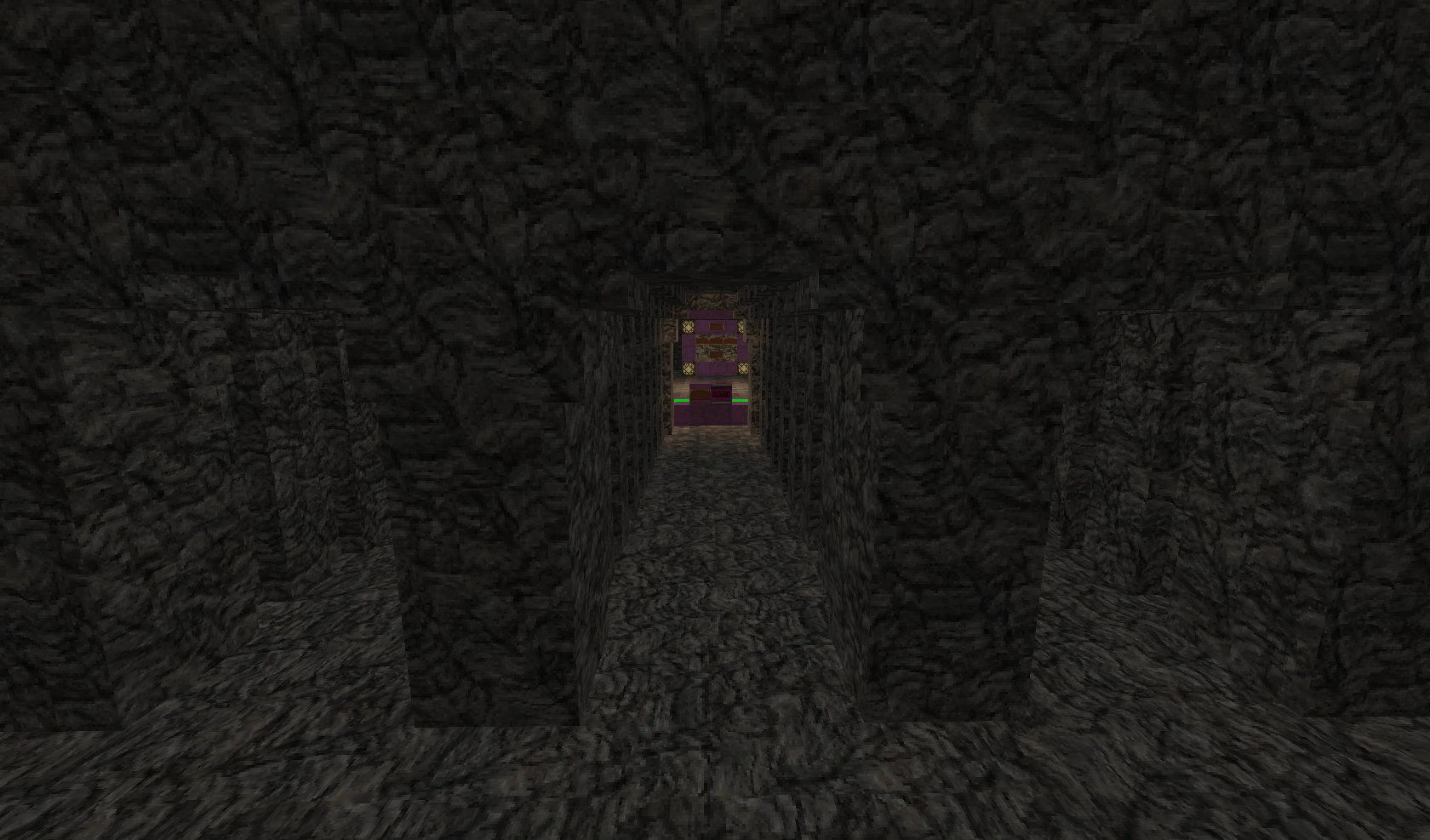 The Caravansary was a sending/receiving station for carts and caravans during the habitation of Moria. It would receive supply carts carrying equipment and food from the East End and would send back carts full of ore. It also distributed carts around the West End itself. All carts are either rotted away and gone or were taken back to the East End where they found new life as wheelbarrows for the orcs, but the Caravansary remains. 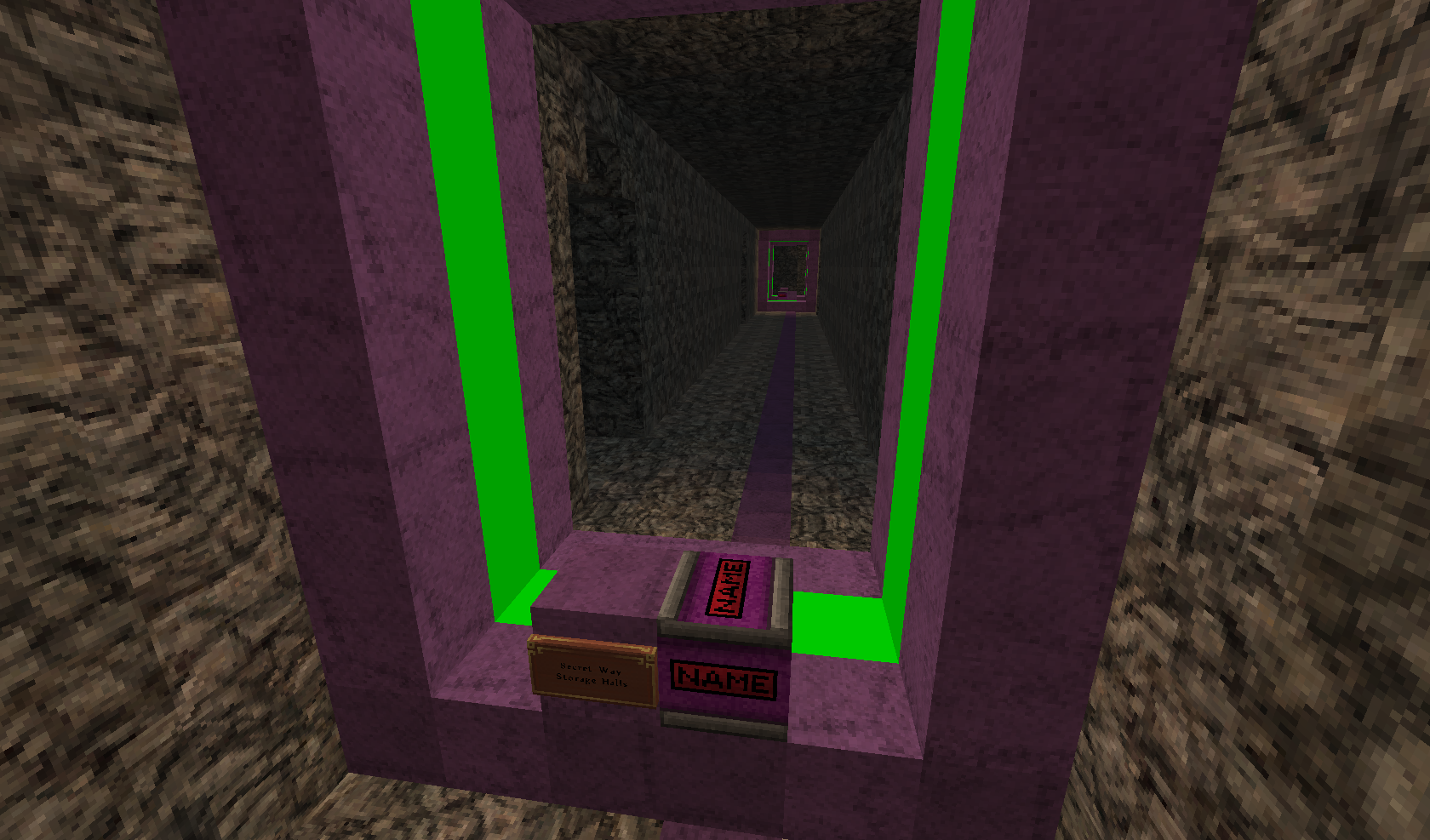 A very simple collection of three storage halls on the beginning part of the Secret Way. Not very much interesting here, apart from the fact that it could have been the route by which Gandalf first went through Moria at some point before the events of Lord of the Rings. If you’re not sure about doing anything too important, this is the least important section you could do. 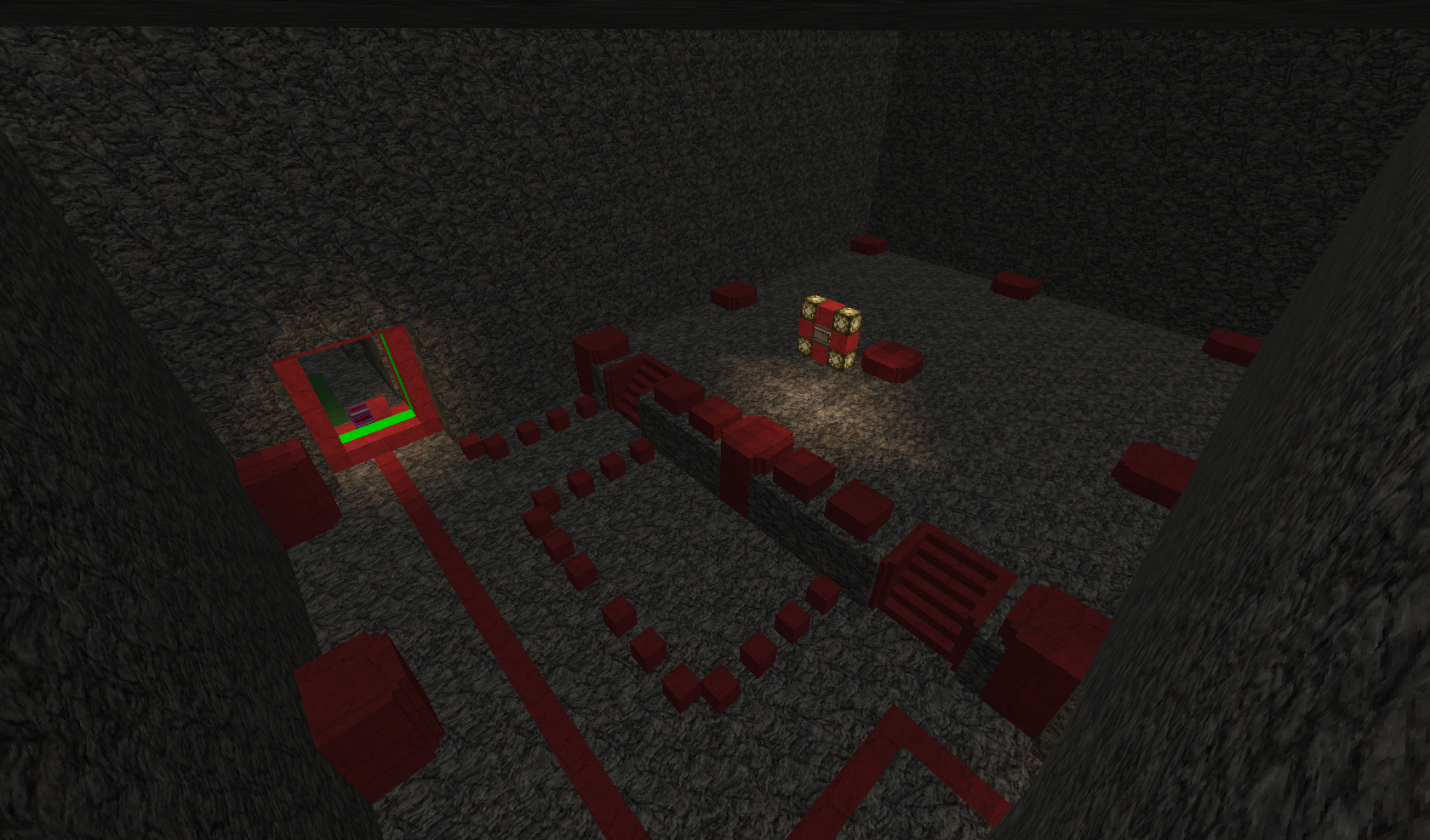 A big muster hall that is adjacent to the Legion Halls, intended for assemblies of the 5th Legion to hear speeches or perform exercises. It is probably the largest single hall in the entire West End, hence why it is on its own. This hall was probably repurposed for the legion after having been built for some more generic purpose, so it won’t look the same as the Legion Halls.

The mining tunnels are not available. If you go anywhere near them, I will kill you.

Also check the project board in-game at /tp -10 105 2467 for the tp coords to a couple of example halls. The gneiss layer example hall should be of particular use. 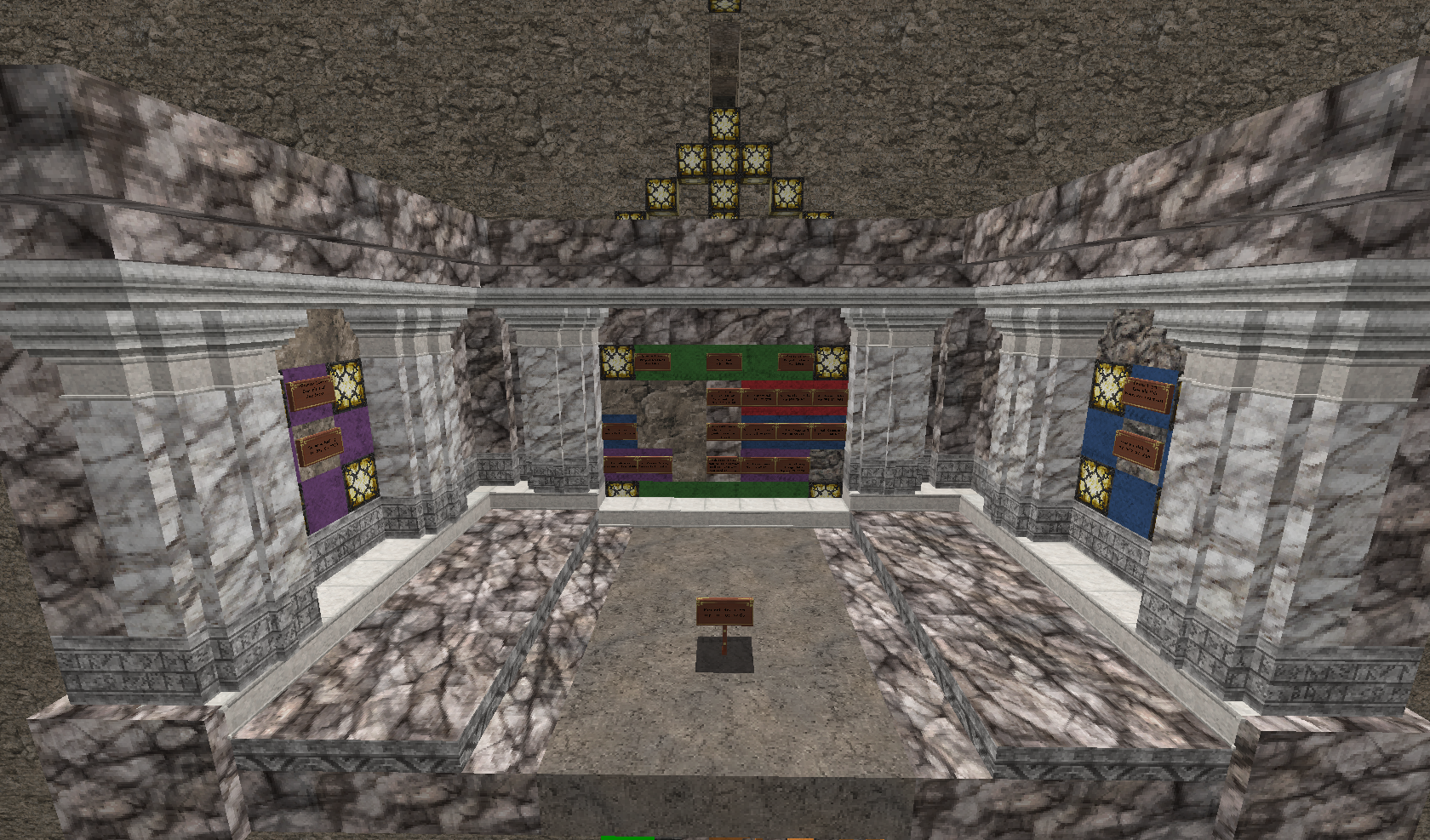 If you are a builder who wants a section, I recommend building a plot in the plots section on the 1.15 server, to test your skills with the style, as well as to let me know that you could handle doing a section. If you’ve done that, then pick a section, message me and I can give you one. I’ll give you some more detail about what the section is and what it needs so you can get to work. Moria is a maze, so if you need to be shown where it is, just ask. I have full confidence in the talent of individual builders to create some good halls.

I leave you with Ice Cube, the definitive Dwarven warrior. 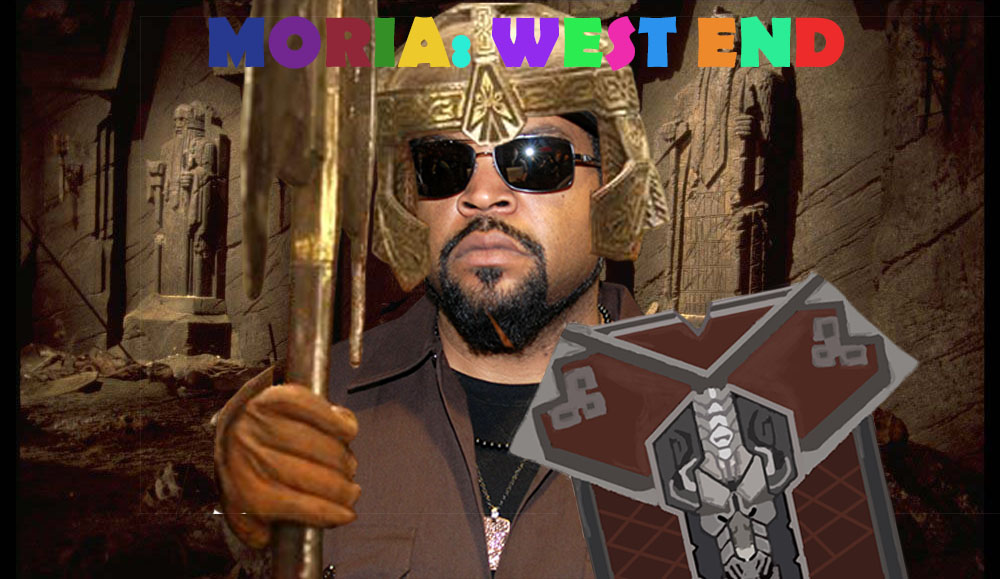