Lore: This section of Moria lies in the south-west of the East End and has an alternate connection to the West End. (So the fellowship came nowhere near this area and there is no lore from LotR.) There is a long water channel to the West End and roads to the rest of the East End. When the mines in the West were still active, the ore was transported through the channel and processed in the forges and workshops of this hub. The finished product was then exported to the east (map facing east): 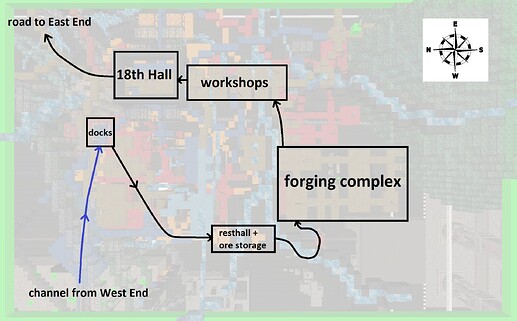 Unlike the West End, this hub was permanently inhabited and has many different housing halls and streets as well as feasthalls. The central and biggest hall of this hub is the 18th Hall, which served as a market place and housing hall combined.

The architecture follows the general epoch system which holds for all of Moria:

Epoch 1: The period immediately after the settlement of Moria. Mostly limestone and minimal decoration. There are no Epoch 1 areas in this part of Moria, because it did not yet exist.

Epoch 2: The period after the end of the First Age and the War of Wrath. Broadbeam and Firebeard refugees from Belegost and Nogrod come to live in Moria—in fact the Broadbeams have a settlement with 3 housing halls here, below the 18th Hall—and affected its architecture with their experience working with harder stones in the Ered Luin and their more technical style that resulted from that. The beginning of Schist and red granite in Moria’s architecture. The majority of halls in the 18th Hall Hub are Epoch 2.

Epoch 3: The period encompassing the contact and trade with the Elves of Ost-in-Edhil. This is the beginning of true rounded arches in Moria, among other smaller design elements that make Epoch 3 areas look a little more Elvish in appearance. Some sections of the 18th Hall Hub, that were added later, are Epoch 3.

Epoch 4: The period after Ost-in-Edhil and Eregion are destroyed by Sauron. Moria is sealed off at this point, and architecture begins to prioritise defensibility and practical purpose over beauty (guardposts, the bridge at the 2nd hall, etc). There are no epoch 4 halls in this hub, we might however add some traces of the fight with the Balrog (at the end of epoch 4).

For more lore, look at the Google documents:
https://drive.google.com/drive/u/0/folders/1sWoy6ZBd7gvHlNGynXquPOJiW82Wr2Oz

Plan: See /warp MoriaPlan for a full layout of the new Hub: 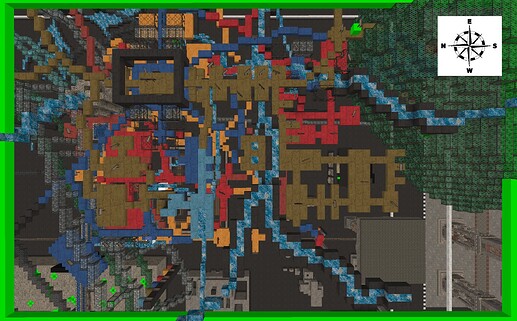 There are a few halls in marble layers in the north and a couple of unfinished halls in a gneiss layer in the south. But the vast majority of the halls are in a limestone layer, which is a very weak rock, that is slightly solvable in water, so most of the ruining will be due to water damage. This also means that we can have big natural caves with dripstone formations. In the 18th Hall Hub there are two caves containing underground rivers and a small lake. These rivers also feed the big channel, the water reservoir, the bath house and two fish farms.

We divided the 18th Hall Hub into ~30 different sections: 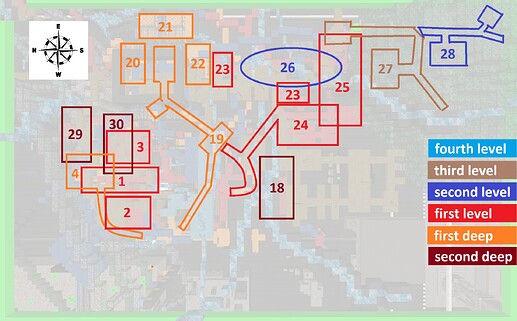 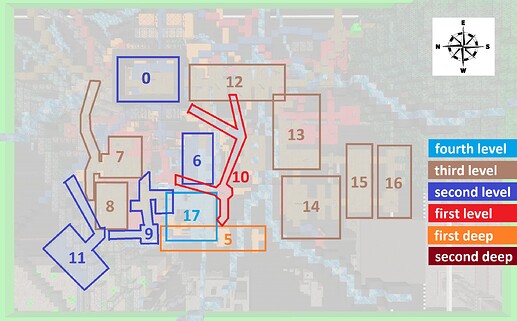 Section 0 consist of 16 dwarf houses/appartments that can be claimed individually. If you have little experience with Moria and dwarven builds, we recommend to build at least one dwarf house here before claiming larger sections.
Most of the other sections are to be claimed as a whole by a single builder.
Please message RohesSchnitzel or me, if you want to claim a section!

We will not open all sections at once! Only sections with a Name-block are open. They are also marked in the spreadsheet in the Google documents.

Note that the dimensions of the halls in your section are the maximum size those halls can be, but feel free to make them smaller or change their shape a bit. (Might be nice to have a hall that’s not just a rectangle.)

In-game guide: There is a build guide at /warp dwarvenHouseGuide, that also shows how to ‘ruin’ limestone halls. For bigger examples go to /warp Moria18thHall and /warp MoriaBathHouse.

More information on the individual sections can be found ingame or in the google doc: