Official Minas Tirith thread. All relevant project info is contained in the document below.

As an update, Whee and I have been moving over to Pelennor Fields to do some work there and lay the groundworks for opening plots and setting up styles. Atm there isn’t much for the public until we get a better feel for things. The city is fairly quiet currently as well while we regenerate some motivation elsewhere in the project.

Will provide more updates as things progress and plots are opened

To add to this and be transparent about Eag and I’s course of action, our general gameplan is to do the southern westward quarter of the first, second, and maybe third levels in their entirety so we have a feel for the look of the city in a portion of the city with minimal guilds among other things. Once those are done, we will do the north side equivalent of that, and afterward - gradually move eastward.

The reason for this is so that by the time we hit the stuff towards the front of the city, we and the server will be better adapted to MT styles in general, and I think our vision for the city as project leaders will be more solidified.

Expect occasional plots and ints to be given out occasionally going forward for the next two months, as we push to finish the southern western quarter of the first level

Little update, since I’ve noticed it in a few interiors now and just want to make everyone aware of the options available, so there’s no further confusion.

Regarding rafters of houses, there are a few rules you typically want to follow. Rafters typically will span the shortest distance (though there can be exceptions, later discussed here) so usually have them width-wise across the house. The second is: don’t have ‘floating rafters’, when doing stairwells. Typically if you split the access to the upper floor and lower floor you avoid this problem, but if you don’t, here’s something you never want to do: 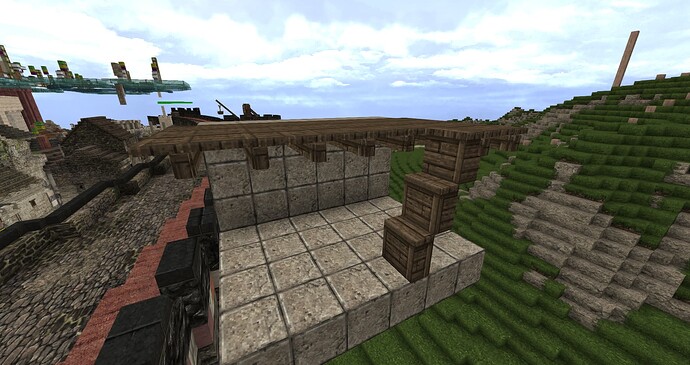 Instead, pick a place for the stairwell to be strategically located in such a way where that doesn’t happen, or there are a few other workarounds. Also avoid having changes in rafter direction without beam boundaries that demonstrate structural integrity. Good examples of changes in rafter orientation are below: 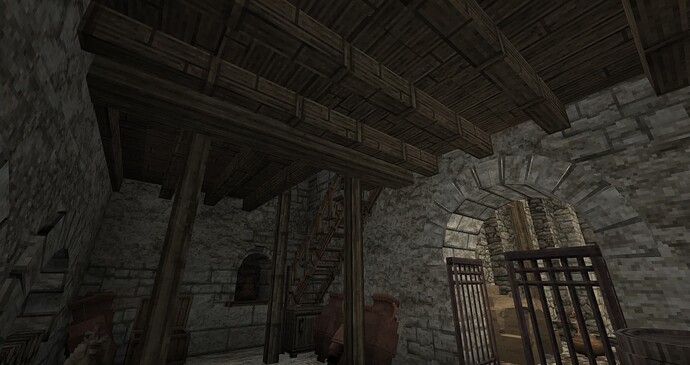 There are others throughout section 1, but this is the easiest example.

Also, remember you don’t necessarily have to have wooden rafters in every house. There are alternate plaster designs, or even in some cases, stone vaults - which if the house borders the clff or you’re doing a shop at the base of an insula, typically might be a nice way to add variation. Below is a firewood merchant’s stores, which this design employed quite well: 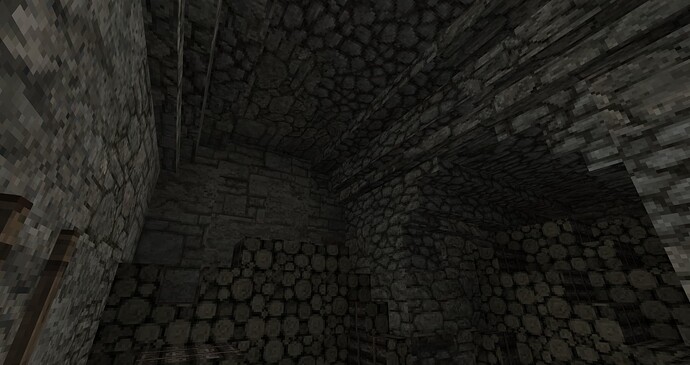 I’ve gone through MT and marked ideal interiors with the warped purple calcite crystal block that have already been done for which you can reference, which best match the look and feel Eag and I want for the interiors of Minas Tirith. There are obviously more than the ones I marked which have been done well, but the selection I chose is a broad one that hopefully provides enough examples (of both diagonal and straight ints) for which you can build off of. Reference these going into Section II as best you can.

Other things to remember: not every house would have a kitchen, nor would every house have a table. Some can be simple, and that’s fine - the simpler the better in most cases, frankly.

Since the old location of the interior reference list was uh, displaced, I’ve salvaged it again at
/warp mtikea

If you notice any designs you wish to add to the area/come up with new ones, notify me and chances are they can probably be added there so people have more things to reference.