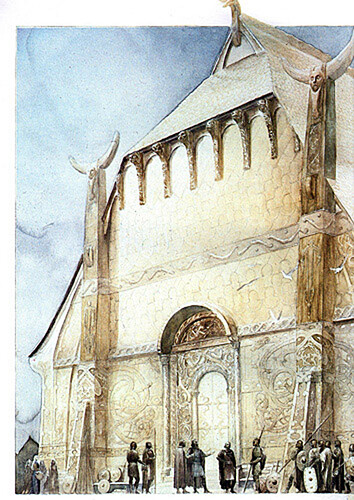 "Far inward they glimpsed a tumbled mountain-mass with one tall peak; at the mouth of the vale there stood like sentinel a lonely height. About its feet there flowed, as a thread of silver, the stream that issued from the dale; upon its brow they caught, still far away, a glint in the rising sun, a glimmer of gold. ‘Speak, Legolas!’ said Gandalf. ‘Tell us what you see there before us!’

Legolas gazed ahead, shading his eyes from the level shafts of the new-risen sun. ‘I see a white stream that comes down from the snows,’ he said. ‘Where it issues from the shadow of the vale a green hill rises upon the east… in the midst, set upon a green terrace, there stands aloft a great hall of Men. And it seems to my eyes that it is thatched with gold. The light of it shines far over the land. Golden, too, are the posts of its doors.’

‘Edoras those courts are called,’ said Gandalf, 'and Meduseld is that golden hall. There dwells Théoden son of Thengel, King of the Mark of Rohan. We are come with the rising of the day."

As the Folde draws to a close, we’ve decided to open the Meduseld build contest. For the first time in ArdaCraft’s history, this contest will not only be open to ArdaCraft’s builders, but to anyone from across the Conquest Reforged community.

Additionally, this contest has cash prizes for first and second place - $100 and $50 respectively. 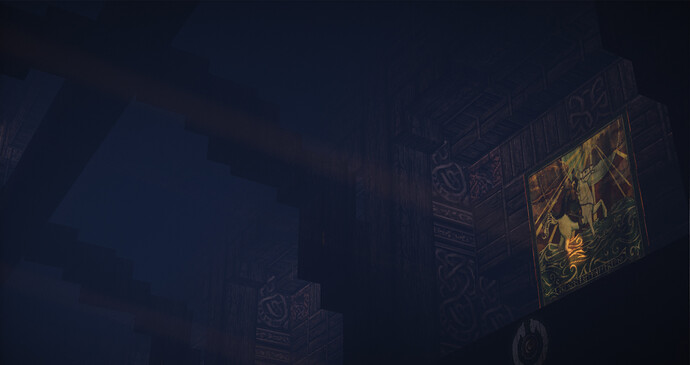 “Many woven cloths were hung upon the walls, and over their wide spaces marched figures of ancient legend, some dim with years, some darkling in the shade. But upon one form the sunlight fell: a young man upon a white horse. He was blowing a great horn, and his yellow hair was flying in the wind. The horse’s head was lifted, and its nostrils were wide and red as it neighed, smelling battle afar. Foaming water, green and white, rushed and curled about its knees.”

For those who participated in the meduseld building competition: the jury will be selecting the 5 best entries this week. We’ll try to grade those, and present you with a winner and runner up in the week thereafter

The results are in. We judged the five meduselds we thought best exemplified the Folde and Edoras as a whole, and out of four categories: exterior, interior, lore, and realism, we rated each player out of 10 points each, 40 points total. Coming in first, we have @eag with 35.7 points. The runner-up was @Vitautas with 28.3. A close third place was Danoir with 28.0. Coming in fourth and fifth we had ThatRuben and Barinthius with with 27.0 and 25.7 points, respectively. I’d like to thank everyone who made a submission and participated in this competition and also congratulate our winners. Hopefully we do another one of these soon! -Micah