Lore: Not much lore on Lossoth. will be looking at some other lossoth vilages and do something similar. The little lore that excists is about kennels and sleds. Kennels will be in this villages (Overhead plan) and will be done in the same way as they were done in Lossoth8. 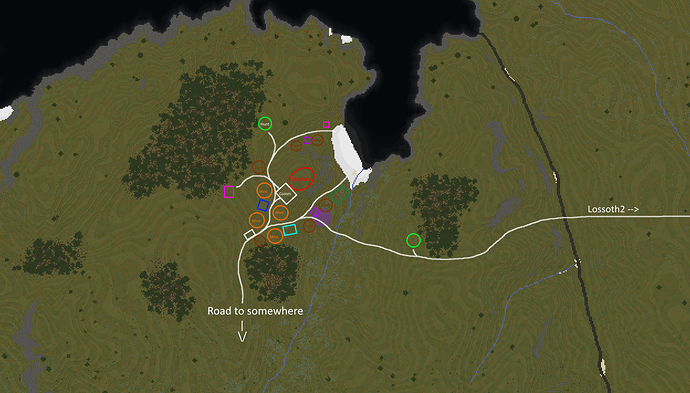 Lossoth1.png1248×711 617 KB
Blue: storage
White : community area’s
Purple : fishing gear
Pink : Shitbox
Light blue:kennel
Note. As the style will change into lossoth8 kinda houses the classes of med and low would be gone just look at it as orange brown and green will be houses

Little plan for the burned down shaman house (Read lossoth4 thread)
This is just a quick plan open for discussion or removal.

Terrain: I will make the stream going trough the village. terrain in general wont be changed 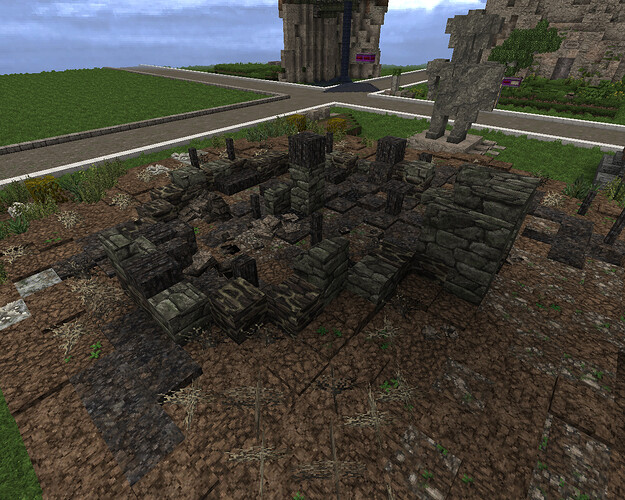 Guys dont wanna sound impatient or anything, but could I get a reply on this so i know what to change or so i can get started.

However. No need for a road to somewhere, a small path to lossoth2 should be enough.

Could you add some plans for some whaling activity i.e. maybe a dead whale being butchered on the shore and some bones around the village being used for houses etc.

I don’t mind if you really don’t want to do this or if anyone thinks it’s not a good idea. I just think it’ll be a nice detail for this village.

If there are concept for whales being butcherd ect. I cant see why adding one would be a problem. So to answer your question yes i could.

No need for a drawn out plan i think as there is only one beach in and around the village.

Yeah there is somewhere in fb. If you see him, ask @Ahorn since he did some really nice whaling stuff and will be able to tell you where it is.

and ye just wanted to hear your response before approving so go ahead. Let us know when it’s open

Havent been able to work on this for a while. Got a lost of shit going on irl atm. Hoppefully i can be online this weekend to plan everything and open the project

Update.
Still havent put much time into it. As im in a very busy situation in my life considering im in my final year and need to finish a lot of stuff. Because of this im taking a break for about a month and I hope things will calm down for me in 2018. From then on i hope i can find more time to spend on the server. Se you guys in 2018
Update lossoth1.
About halfway done planning or something like that

@Chevy_the_cat is taking this over.

Can i have an overseer look over the layout? I believe its ready to go unless i need to add something. thanks

Lossoth 1 is open for business. Please follow the on-sight guide. You may visit lossoth 7 for interior ideas as no metals are allowed.

Lossoth1 has been completed. Thank you to the all builders who contributed and to others who gave really good feedback to help make this project go smoothly.

I would like to name this village Luokta-fahkon, which roughly translates to bay of the killer whale. Please come by and visit if you haven’t already done so.

Some stats and features of the village include:
• 7 homes consisting of 32 villagers and a shaman
• A large shaman home under construction
• Fishing/whaling area with kayaks and a butchered whale
• Cemetery with monolith, surrounded by whale bones
• Totem pole representing the tail of a whale
• 3 storage sheds and 2 meat storage sheds
• 2 dog pens with dogsleds
• 2 hunting blinds located on the edge of the tree line
• Small crop field
• A natural arch just west of the village (thank you Ahorn)

The villagers of Luokta-fahkon are mainly hunters and fisherman, but they also are able to grow a small number of crops. Dog sled teams help them to travel farther, in the winter months, to hunt bigger game such as elk and musk oxen. They pray to Fahkon, the killer whale, that they see on occasion swimming near the shore. The people gather near the shaman’s house, next to the totem dedicated to Fahkon, to tell stories and offer gifts to the lord of the sea. Their devotion to the sea spirits can be seen throughout the homes through their use of whale bones as well as the wall of bones that surrounds their cemetery. A large monolith was built in the cemetery and is where the shaman gives last rights to the departed before being buried under a cairn.
Another ritual occurs when a boy turns 14. Soon after reaching that age, he undergoes a rite of passage that includes spending a night below the large natural arch located near the village. The boy must climb down a rope that hangs from the top of the arch and lash himself to the rocks below it, where he stays overnight. He then climbs up the rope in the morning where he is then declared a man.