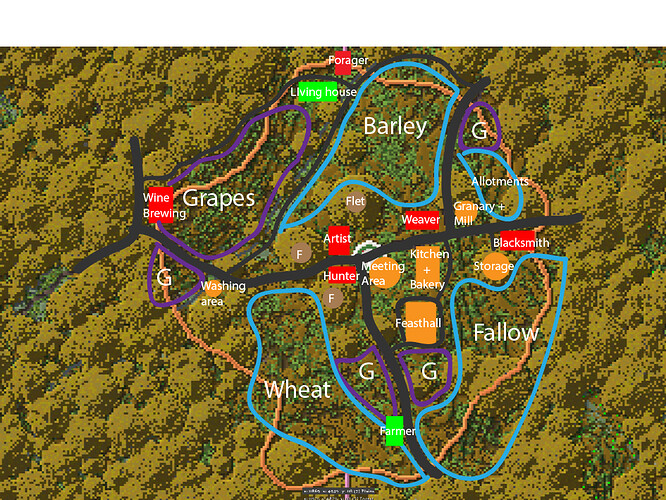 Deadline: 1 month since the project is accepted. 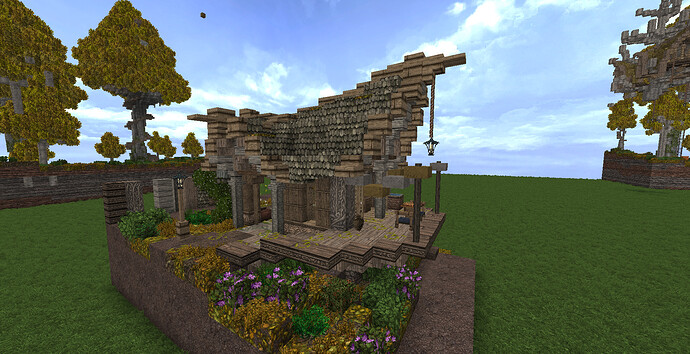 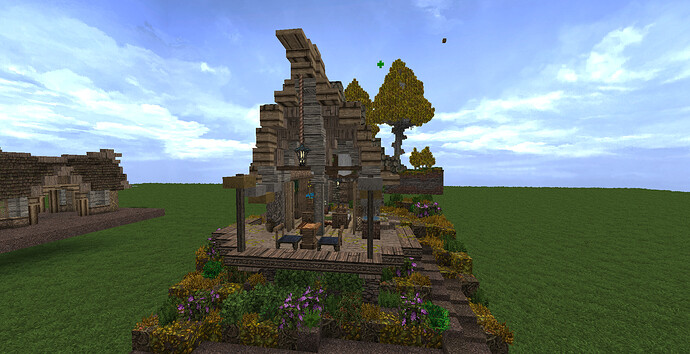 Terrain: I would like to make the little hill where the feasthall is going to be a little higher and steeper, in order to give to the building a more dominant touch.

horizontal beams seem a bit unnecessary here, and I’d avoid the chessboard. Doesn’t look very elven considering how minimalist they are (yes I understand chess was integral to many European cultures such as the Norse, I just don’t think it fits that of Lorien specifically, or at the very least representing it with that sort of block). 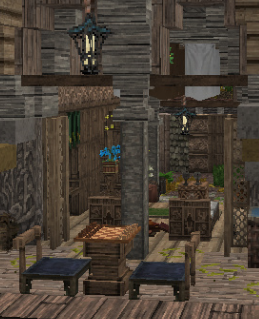 Picture for reference
I like the roof shape you have going, and the style looks promising (without checking ingame yet). Since it’s in the heart of the Naith, maybe go with majority gold-silver roofs to match the ethereal atmosphere of the forest.

If you can, can you also provide a style for the circular buildings that surround the boles of the trees as well? If not that’s alright, but it would be nice to see how you build them/how that will differ from the other ones in village1.

I hope you get accepted after these changes are made, and good luck!

Thank you for the comment!
About the horizontal beams I had placed them in order to fill up the facade a little more, since it looked a bit empty, even if I agree that they are not that necessary. So if you say that thay are totally out of place I will remove them for sure, I would like to keep them otherwise.
I will do the circular one of course.

First and most obvious issue is that the barley field is way too small, and you don’t even have a fallow field. Where is the granary?

Where is bread baked? Where is the forager, weaver, and hunter?

In addition to what wheellee wrote style-wise, I want to point out a few things for the layout. My understanding was that the flets are a rather old thing and there was a “limit” not to have more than 3 in any given village. This would probably mean you have to do more living space on the ground, maybe add 2 more general/sleeping houses along the east-west road?
Also the barley and wheat fields should be roughly even sized, maybe even have a fallow field as well. If the project leads don’t want you to go outside the marked area, maybe do the grapes sprinkled across the whole settlement in a rather “tasteful chaos” to be more wild/closer to nature?

Edit: Fornad was faster, adding to that: Threshing floor and a mill?

Good point about the flets, I’d just reduce the number of flets overall.

Uups, my bad, didn’t see the first part of the document, I’ll fix it immediately. I’ll add the forager, the huneter and change the disposition of the fields. About the smith, the document says “blcksmith”, I just wrote it shorter cause I’m lazy

Apologies on the smith thing, made a mistake there.

Alright, just let me know when you’ve redone the plan.

Plan updated, less flets and better fields now. Thank you @Ahorn for the suggestion about the grapes.

Taking all the above feedback into account it looks better now. Two points I’d like to make however:

EDIT: Removed some trees. Although you should consider adding a few here and there afterwards, it’s a forest after all.

that was the washing area, forgot to write it

Edited the plan again. Now the fields are bigger, hopefully big enough. After the advice about the grapes, I changed the disposition and I tried to fit them in the south exposed slopes, even if the terrain is mostly flat.
With the help of @wheellee I also fixed a few details in the concept house; I’m also preety much done with the concept for the circular building, wich I will finish tomorrow at some time. If anyone wants to check the concepts in fb, the coordinates are [-5453; 3241]. Cheers 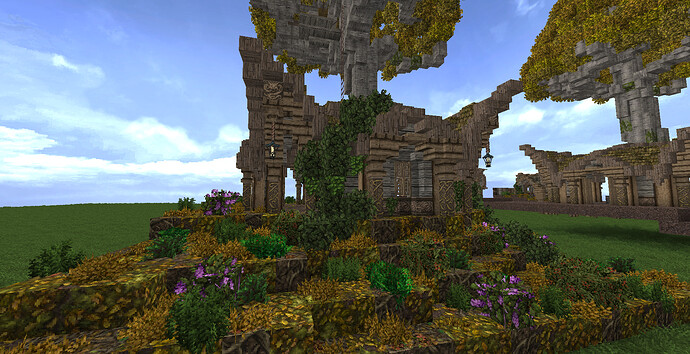 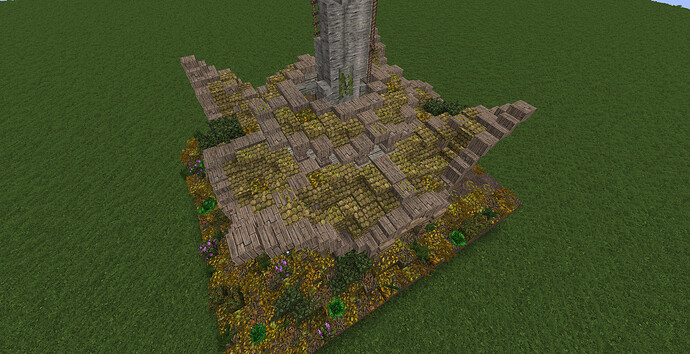 Feels too wide/flat on top to me. There’s one in LV1 (the further south of the two) which is a much better design - I’d be fine with you just copying that building over and making a few edits.

For the brewery, the position is fine, I would place it on the other side of the road, right next to the crossorad you see on the right, just to keep that slope ffor grapes since it’s south exposed, but that changes nothing.
About the “oversized” concept, I would like to note that it is exactly the same size of one of the two you can find in village1, the only difference is that that one has a larger tree in the middle so that it feels less empty. So this can be fixed just changing tree in case. Anyway, I wanted it to bea storage area, not only for food, but also for tools and general stuff, and since it is the only dedicated area in the village, I believe it shouldn’t be too small.

Maybe dont store food with everything else

After some more discussion, Never and I have approved this project. Good luck!

) on the circular building since it was too wide, hope to get it ready within the weekend.

My suggestion would be to work over the details of circular storage after laying out the village with wool. Let others start building it already