Private or Public: Private, will be opened to public when ready. 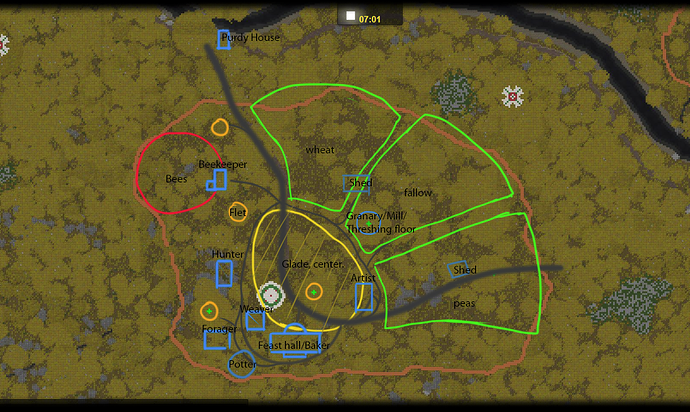 In-game guide:
We have two houses created for the ingame guide, one with several features to look at, to serve as inspiration. The smaller house is what a house may look like. There will be an area beside these houses where the different materials used in this build are showcased with signs indicating their uses. We will also add a few variants so that our builders can play around with different colors.

May also add a few tips inside the houses for ways to achieve different looks etc. Terrain: A huge central glade with a big mallorn tree in the middle. Serves as the inhabitants primetime chitty chat hub.The road leading into the village is surrounded by gentle slopes forming a cauldron. that envelops the central glade. Buildings are built further back in the treeline where the glade ends onto these slopes.

Reference Imagery:
We gave ourselves a few keywords to work from both when choosing color palette and the look of our Lorien houses. Our build will have a colder, more pale feeling to it; think moonlight. The roof is elevated slightly and there are fewer solid walls, more open space. We’ve also wanted to have more pillars in various shapes and sizes to compliment our open areas, make them more appealing to look at as well as adding depth.

The main shape of the roof will follow the general Lorien style, where as sticky outy bits’n pieces may be slightly different. Floor levels as well will have different elevations if the terrain allows it. Porches and roofs will flow into one another more seamlessly.

As stated before, the concepts are very nice.

It wouldn’t make sense for the road to pass through a field. Maybe have two fields on one side of the road and a third one on the other side. Also, is the field marked “peas” supposed to be barley? I’d suggest adding some gardens/allotments to the village as well.

There will be an orchard near the Beehives

Thank you for your input kind sir, what are your thoughts of this? 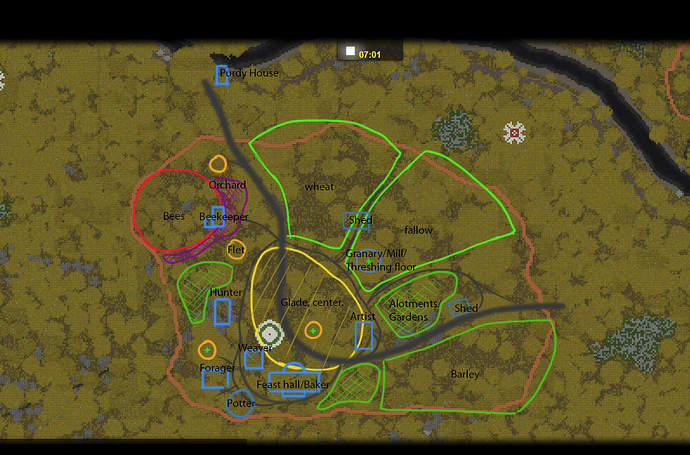 Not much to criticize really, besides the fact that i dont really see the reason for orchard to stretch ,around" all the bees. Are you planning to wipe out everything in the ,glade" area? Consider it in-game once you start doing it, I’d rather keep the forest intact.
The bigger house concept is sort of sophisticated and unnecessary. But as you’ve said yourself it might act nicely as a reference, to get the feeling of your style.
You will surelly have to cut out some trees, but I can help you with that. Some adjustments might come into handy as we do it.
This application is to my liking. But I’d also like @Fornad to give it a look

We’ll probably find a better solution for the orchard once we get down there.
luckily the glade area is already quite open, I don’t think much work would have to be done with the trees, a few may have to go but I don’t think that it would stick out like a sore thumb on a grander scale, but as you say, we’ll know better once we get there. Many thanks for the reply!

The glade in the middle is indeed a bit too big, but you will adjust the size as you get to it ingame. One thought about the central mallorn: since it will be the main centre and “attraction” of the village, wouldn’t il be cool to have it a bit over sized than standard mallorns, in order to make it stand out even more? That would mean building it directly there instead of pasting it in (i can do it if needed). What do you think? @Neverlegendary @Fornad

Already given quite a bit of feedback over PM.

@Dreasp @Marchuell when I said you should combine the hives and orchard, I meant you should have the hives mixed with the orchard trees in a single area.

since it will be the main centre and “attraction” of the village, wouldn’t il be cool to have it a bit over sized than standard mallorns

Absolutely fine with me.

@Neverlegendary if you’re in agreement, I’d like to accept this application.

I am accepting it as it is.

@MrBanana nice idea. My suggestion is to leave the tree to these guys. Obviously under our watchfull eye. Would be nice for new people to get familiar with the building technique. <Whispers: carrras galadhooooon> wink wink