Gil-galad was an Elven-king.
Of him the harpers sadly sing;
the last whose realm was fair and free
between the Mountains and the Sea.

This is the official planning and discussion thread for the elven realm of Lindon. Anything related to Lindon’s terrain, settlements, or farms should be discussed here.

As many of you will already have realised, I plan on releasing Lindon bit by bit over the coming months. Creating the forests and finalising the terrain takes a great deal of work, and it makes no sense to withold completed areas from the community just because I haven’t finished all of Lindon. As such, I plan on releasing the southern Ered Luin next, then Harlindon, then the northern Ered Luin, and so on. 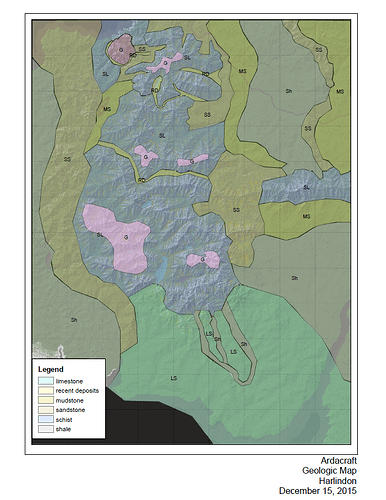 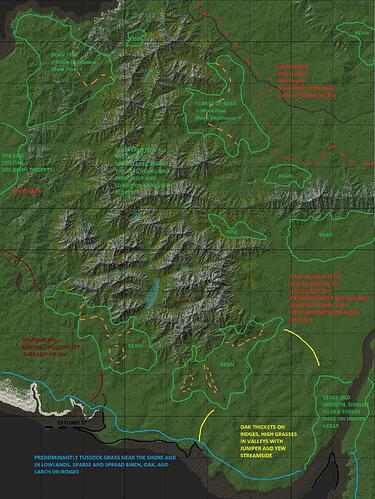 As such, only minor touch-ups and detailing should be required in-game (i.e. adding ruins, ant hills, wolf dens, doing streams, etc.), which should make terrain work a lot more rewarding than it has been previously. Please refer to the Open Wilderness Projects thread if you are interested in working on a section of terrain in Lindon.

There are going to be three general types of settlement seen in Lindon, though each will have their own distinctions.

Firstly, the elven cities and towns. There will be three cities - Mithlond, Harlond and Forlond, and potentially between 5-8 smaller towns on the coast or further inland. According to the research of Michael Martinez the city and towns of Harlindon will be mainly Sindar in origin, and Mithlond would have mainly been inhabited by the remnants of Círdan’s people, the Falathrim (who were also Sindar). The city and towns of Forlindon, however, would have been built and inhabited mainly by the Noldor - and I therefore intend to show a distinction between Mithlond/Harlond and Forlond in terms of architecture.

Secondly, the settlements of the more rustic woodland Elves, living in harmony with nature in the forests of Lindon. These should be inhabited by a mix of Sindar and Laiquendi Elves, and will clearly look very different to the cities. I’m interested to see concepts for these.

Thirdly (though not strictly part of Lindon proper), the settlements of the dwarves in the northern Ered Luin. These comprise three major projects – the ruined cities of Nogrod and Belegost from the First Age, and the “poor lodgings in exile” of Durin’s Folk, Thorin’s Halls (now a sub-realm of Durin’s Folk under the rule of King Dain II Ironfoot, King under the Mountain) – and also several smaller projects, a mix of abandoned and active mines scattered across the mountains.

If you are interested in leading a settlement in Lindon, please refer to the Open Settlement Projects thread.

Some topics for discussion:

To kickstart the discussion in this thread, I thought I’d post a few topics. These are by no means the only things to be discussed, and if you have other questions or concerns please post them below.

On farms and food. Since we obviously won’t have a Shire-like system of farmsteads in Lindon, we won’t have separate applications for farms. Instead, whomever leads a city or town should also handle its farms. Ben and wheellee made a concept for elven farms – perhaps that could be developed further? The old question of dwarves and food also springs to mind – my belief is that they hunted for meat in the valleys of the Ered Luin and traded for cereals and vegetables with the hobbits, though if anyone has any objections or other ideas, do say.

On elven professions. Obviously, elves would have similar professions to any other group in Middle-earth, but are there perhaps professions that should be more or less common? For example, I doubt there’d be dedicated healers or apothecaries given that they were invulerable to disease or old age. Furthermore, there are professions (such as shipwright) that we’ve never handled before, so it would be cool to see some concepts for those.

I’m really looking forward to seeing what we achieve in Lindon. It’s very different to anything we’ve worked on so far, and should make a welcome change from the Shire. Furthermore, for fans of the Silmarillion, it’s about as close to the First Age as we can get in this recreation of Middle-earth (with locations like Tol Morwen, Tol Galen and the last palace of the High Kings of the Noldor all present) and so there will be a lot of lore behind many of the builds in this section. Finally, it’s worth saying that we have reached a point where the true scale of our map begins to become evident. Once all of Lindon is loaded in, this will truly begin to feel like a vast project, and I can’t wait.

Could we begin a list of lore appropriate names for Sindar and Nandor settlements, and maybe incorporate that into project applications for those settlements? “nandor6” and “sindar4” make for very bland warp names. And i’m sure the language enthusiasts can come up with some appropriate names.

I’ll get someone on that before I go.

Going to throw out an opinion on the Sindar settlements.
Although the Havens have been emptying slowly over the years, the settlements outside of the Havens should be decently large, or have signs of being larger previously. (by this i mean foundations from previous houses, or simply abandoned houses) I’d vote for the Sindarin settlements to be at least as large as somewhere like Archet if not larger; especially the coastal towns. As it would make little sense for them to be smaller than Shire villages.

One of the impressions the text seems to give is that the elves always left in groups, generally with the same families or collectives they had been part of for ages (some of the groups in the havens are remnants of different factions from Beleriand). So, it would be nice to add, or edit, some of the settlements to be totally abandoned. As the elves left over a period of many years it would actually make sense for an entire community to leave their town simultaneously and for it to be reduced to foundations or overgrown over the past hundreds of years. Some of the communities would continue to thrive as they are still invested in Middle Earth, whereas others would choose to leave (individually or as a collective), and sort of just fade into the ground.

It could look really good to have at least one fully abondoned village, with trees growing through buildings ect.

How about two abandoned extra villages, and two of the current villages being half abandoned. Could have one of them showing the elves moving away, with carts and stuff on the road on their way to Harlond.

This is just my opinion, but like i said above…
I feel it would make more sense that entire communities would have left together rather than individual households. I think it would be rather weird to have a town half abandoned. I feel like its better to have entire settlements abandoned, with the remaining ones being communities that still have some sort of vested in middle earth, and are still attempting to prosper in light of the circumstances.

Pretty much the sense you got from the books, too. In the books it also seemed like only Mithlond had the access point to the straight road, or was still producing ships enough to transport large amounts of people, not Forlond or Harlond. Cirdan essentially controlled the last gateway into Valinor.

One thing I’ve noticed is how hobbity/materialistic all the nandor interiors seem to be. Especially noticeable in Minthaun/Oelbar (to a lesser extent), they don’t really seem to match how rustic the houses are on the outside and the culture we’ve used to represent them. If one looks in the interiors at Imlanen, they could see that they have the bare minimum, (e.g. a dirt floor, moss carpets as beds, and moss and herbs hanging from the ceiling. One must also remember to refrain from using animal skins/meat of any kind, as these are in fact one of the only groups of elves that are vegetarian. All in all, just my two cents, since currently all the elven interiors for the Nandor seem way too cluttered and ‘humanoid’ and this isn’t due to lack of block types.

Everybody’s already seen this, but i’m posting it again.
Because, “it brings me great pleasure” ©_Wheellee2016_ 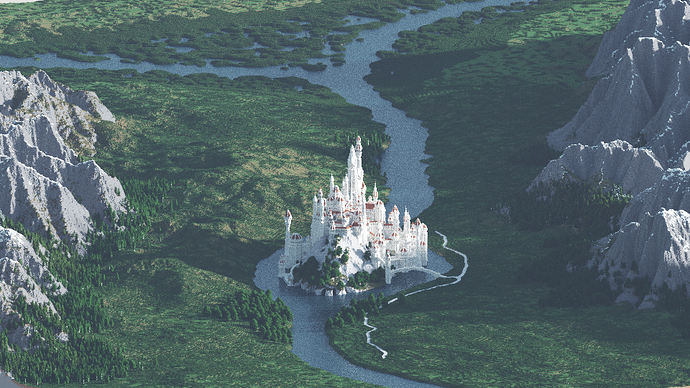 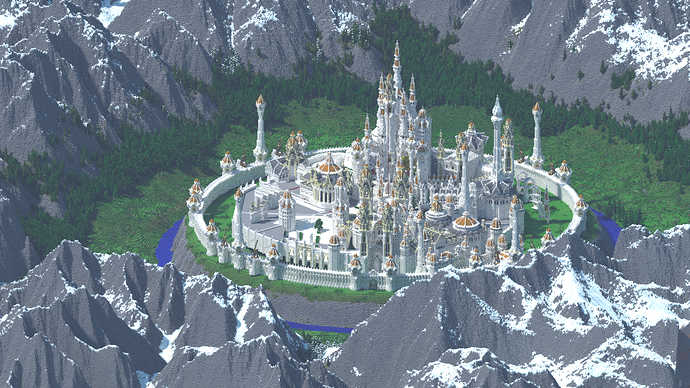 Looks beautiful, but who made it?? I feel like I missed the construction of Beleriand or…

This is made by Divici He create a lot of Middle-Earth (from first, second and third age) builds.

And it’s not even done yet.