Player name:RikjeB
How did you find out about us?: In the Lord of The Rings mod community you guy’s are well known. Players there notified me of Ardacraft and that I should check it out.

Where are you from?: Netherlands

Why do you want to help with this project?: I like Minecraft but more so Tolkiens works. I hope to contribute to this amazing project and help realise the world tolkien made. I also hope to learn a lot during my time on ardacraft. Specifically, to improve my terraforming and my knowledge of geology

Which Tolkien-related works have you read, seen or listened to?: I have read the Dutch version of LOTR, The Hobbit, The Silmarillion and the lost tales. In the future I hope to read the english verions of them all as well as HOME.

Scene 1: scene one is a limestone cave that I made. It contains some Speleothem that where formed because water transported some of the Calcium Carbonate in the limstone. This eventually builds up and begins to form the striking features. The cave would mostly be formed by water eroding away the limestone collapsing parts of the stone creating the empty space. My cave still has a pillar at the entrence but that will probably be eroded in time as well.

Scene 2: scene 2 my attempt at recreating high force waterfall in England. In real life it consists out of 3 layers: a top layer of dolerite under that sandstone and then a layer of limestone. I did not find a block of sandstone that would fit in between Andesite (Which I used for the Dolerite) and the chist that I used to represent the limestone(I chose chist because the limestone in real life has a blue-greyish tint to it, and there where no other limestones I found to fit this closely). The waterfall is formed because the limestone underneath the hard dolerite erodes much quicker. Over time the waterfall will retreat upstream because erosion will eat away the limestone causing the dolerite to collapse.

Scene 3: My third scene is a beach that I made. I decided to make it out of mostly layers so I could make shoals. These arise because of waves depositing sand that they pick up coming closer to the shore. I added some layers of sand with vegetation to represent the seaweed and layers with gravel to represent seashells. In the back I tried to make some small dunes but I ran into size issues so those are not as well represented.

Scene 1:33-29
Scene 2:33-30
Scene 3:35-29
sorry for the many plots, I should have probably built smaller
Are there any types of landscapes you are particularly interested in building? For example, coasts, forests, mountains, etc.: I would like to particularly make mountains and basically anything that has to do with water other then the sea.

Other relevant skills: I have a decent knowledge over Blender and concepts around 3d workflow meshes, heightmaps, normal maps. Working with blender also taught me how to work with a node-based program, so I would be familiar when working with other software. I also know basics of programming and trying to learn html/CSS right now, in the future hopefully C#

some of my renders: Imgur: The magic of the Internet

Thank you for your application! It’s clear you’ve put a lot of work and research into this, which is what we’re looking for.

I’m going to promote you to Landscaper - if you look in the #landscaping channel on Discord you can see some more in-depth feedback to your applicaiton there!

To begin with, you can assist @MusicalGeek22, @Itai007 and @olaf16 with the Westemnet bogs, under the direction of @wheellee.

Welcome to the team!

Thank you so much

I have chosen chamechaude mountain because I am generally interested in the making of mountains.
The project has gone through a verity of revisions. Most of the pain comes from scale, it has been scaled up multiple times. At the moment I am using voxelsniper to create the base shape of the terrain. It is still very flawed as you will be able to infer from the screenshots. But I am going to fix that when I will smooth out all the terrain and decorate it with detail.

Block choice is going to be an interesting subject, I think I will go for the colour palate at Dunharrow, aldo that does not completely match IRL. 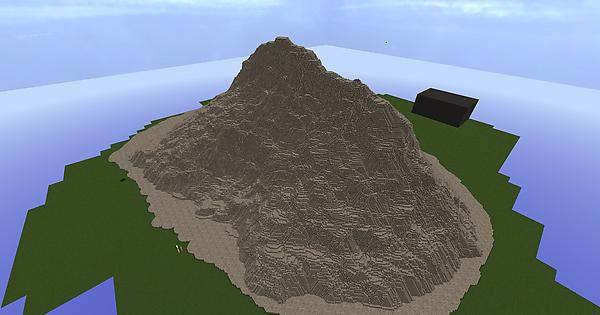 We can see that the center top piece needs more seperation, and the sides need a better slope.
After this there are some smaller midscale details I can give the terrain before I smooth it out .

I still have a lot to do, but i am happy i have the general shape done,Any feedback would be appreciated.