Lore: This is a merry trade town. It was abandoned when Fornost fell, so around 1974 T.A.
the people fled. the brandywine served as a defense against bandits or some groups of orcs, but not against an entire army. there is a market in the centre with a ruined statue of elendil. i want to keep the road to the shire cuz it would have been served for a road to cardolan.

6.png1177×566 599 KB
houses will be as large as the ones in bree, for the farms there would be only mounds of grass left and the blue is the inn (had 3 floors and much stone so will be much intact, same for the mansion. houses at the river side will be partially washed away, really cool concepts for them I have. the roads and market are gone, and no mills. (dunno why I added them).
Reference Imagery: There is a forest where the town is meant to be, so much will be overgrown, and I cant wait for it!!! http://imgur.com/a/GuOzN

Concept(s): Mostly arnorian guide for the houses and the walls will be a bit higher as the rich buildings will be higher, most will be mossy.

I also want to tell that the swap of leaders of thorins halls came really unexpected so I will do my best on this village, and ill never give up

I shall make everything first of wool, and i will be responsible for the streams and rivers surrounding it

The house layout looks very weird - it doesn’t help how thin you’ve made some of the buildings. Look at layouts of real medieval towns and use those as inspiration.

Other apps have drawn diagonal houses and you should too.

The layout still doesn’t make much sense for a town; the market place is huge, the houses are not townhouse like (more like a large village), and the two main roads you have don’t even meet each other. Is a road to the north needed? If not then you could have the roads meet at the centre of the town and have the marketplace/square at this meeting point (somewhat similar to this map) apologies for the poor quality. I also think, after looking around the area, that the position of the fortified section is a bit strange. It isn’t at a higher point than the rest of the town and it wouldn’t really make sense for you to raise up the terrain there either. Instead I think that the most strategic place for it would be in the corner of the river as it bends round to the south. This gives protection from the river on two sides, and is also on the side of the town where the enemy is most likely to come from.
I like your idea of the town’s purpose etc but it’s layout still needs a lot of work imo

I have a few points, so I’ll order them in a numbered list for the sake of visibility:

4)There would be no bridges left at all, (they’d have completely collapsed)

What makes you think this was abandoned at the same time as Annúminas?

You haven’t addressed whee’s concerns - I agree in particular with point 1.

Some other points, this is a really big bend in the river. Maybe the course of the river would have changed over the thousands of years this village was abandoned.
With a great line of forts to the east and big fortified cities to the north I do not think every village in Arnor should have fortifications. This is not just a concern for your village, but future villages and towns in Arnor. I understand castles and the like are fun to built, perhaps you can have the remains of a hunting lodge outside of the city. Think of a big manor without any walls/battlements. This makes sense especially if there is a forest around.

Changes to the course of the Nile over 5000 years. 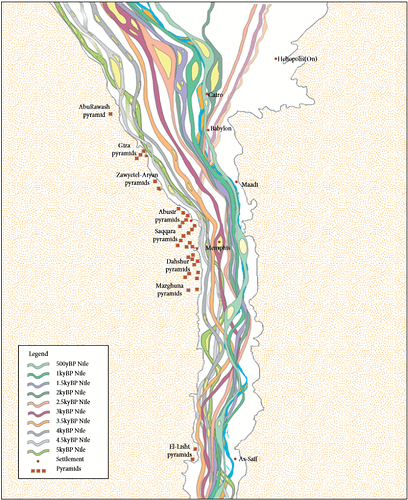 Do i have to make a New layout for how the bend was when the Village was intact?
cuz if the curve would have grown wider in these years, the village couldnt exist anymore, cuz water would have destroyed all the remnants.

Ok so regarding the river’s course, the flat area or floodplain either side of the channel basically represents the horizontal extent of any meandering that has occurred in the past. However, this is pretty much irrelevant since the floodplain, as the name suggests, would be subject to pretty regular flooding events. Over a 1000 year period, these floods, as well as any meandering, would easily remove any remnants of buildings on the floodplain.

With this in mind I suggest that you re-do the layout with houses filling up the inside bend, but avoiding placing any ruins on the grass that is at the same level as the river. I’ll put a pic so this is easier to understand. 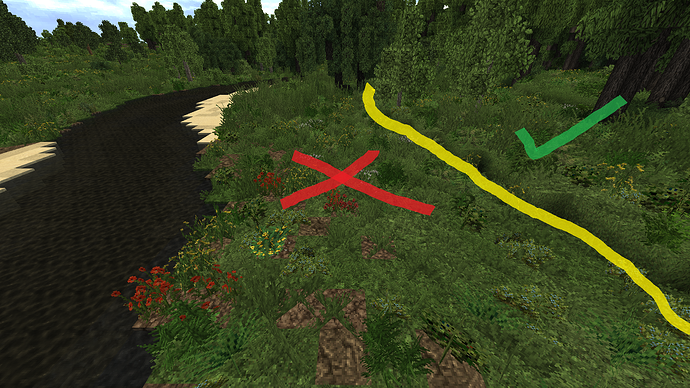 Untitled.png1920×1080 2.43 MB
This represents both the horizontal variation in the river course mentioned by beat as well as taking into account the flooding that would have occurred.

P.S. Just a suggestion but you could have some ruins that have been partially washed away.

Thanks ori, I understand. Shall edit the layout immediately

Will the town have a cesspit?

Ye sure. Will include them

There would be nothing left of them on the surface. I think Hearth was joking.

Still waiting for that updated plan.

This is the final layout, after I read sarge’s post Ill scrap the mills, the road and the market will be gone but thats just to help me and the farms will be mounds of grass, the blue thingy is the inn, more of it will be left, (not much) because it would have been much floors and much stone. thats it i think

ps. the houses will be as large as the ones in bree and ill first mark them with wool

Barry will have co Lead on this

The lay-out of the town is done, I opened the houses for build, use the arnor guide of hearth and the one of sarge for it. If its a special Build it will be told with a sign, name your house and if You are done You can place a waiting approval. You can Just continue with an other house, Barry or me will check it