Hey everyone, thank you for your patience! I can finally declare Westfold Burh for Open!

Here’s how the building process will go. READ THIS BEFORE BUILDING!

All the plots inside of the palisade are open! However, I prefer if people build the plots next to the finished houses.

Every plot has been given the necessary information to be built, however in any circumstance: DO NOT DELETE THE SIGNS!!! Simply move the signs above the house you are building.

You are not allowed to start on a second house before the first house you made is approved by project leader.

Basically, if someone is not able to follow those simple guidelines I will remove their house without warning or ban you from westfold burh.

That’s it, thanks for reading and happy building. Any questions? Ask me on discord.

Made the project application in a document: Here

Looking really good!
I do have one idea for the inner wall tho. Rather than it being a simple pallisade mabe you could build a slightly different wooden wall design?

This is what i had in mind: 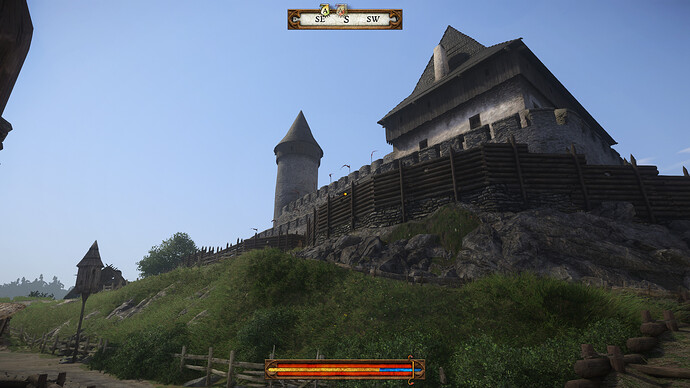 Might be a bit of a wall of text following.

Style:
I like the simple style of the houses. Maybe you could add a materials pallette at least for wall materials though?
Question for @Benzathoth and you would be if it will only be stairs gable roofs throughout the burh or whether you can vary it up a bit. Maybe have a few houses with the transitioning style between gable and hipped roof Chevy does in his homestead?
About the palisade, I think we should start taking Ytsen’s point in general building tips into account and limit the height to between 3-5? You could possibly add an earthen mound design similar to Helm’s Deep’s dike to the bottom to retain your envisioned height?
Will you make the keep out of mudstone, cobble/limestone or a brick combo similar to Helm’s Deep?

Layout:
I thought about a more compound featuring layout for another village. I’ll try to make a concept and we could have a discussion ingame about it if it turns out good/is feasable with the terrain. my idea for the village was to have them live together/seek the community and safety of numbers and boni from a village but still stay relatively in their family. Edit: After testing it myself, I acknowledge that the compound idea might not be suitable for the steeper burh terrain.
About the flatter terrain in the northern part, maybe you can have the house outlines there be bigger closer to the homestead house sizes to account for ben’s wish to greatly vary the house sizes in the Westfold.
Another thing you could do with the layout is to cluster the various professions related to each other. so like a metalworking district, cloths makers, baker street, woodworking in the southern part closer to the forest.
I’d definitely put a market of several stalls at the intersection between the north road and the one up the hill. Maybe also add a meadhall and/or inn around, haven’t seen that in your professions list.

Outside:
Maybe also add a few (under construction?) buildings outside the gates and a sort of mud pit near the streams where they get building material from?
Will you cut back the forest to the south a bit to overlook the terrain?

General:
Will you do the whole wool layout, plots, materials and all the stuff in one go or do it in sections like you did Harlond?
I think this is a great app regardless of my many questions. Would like to build there soon!

First, ty for the reply and suggestions, very appreciated. Also been talking to Ahorn ingame and he will join me for colead.

Maybe you could add a materials pallette at least for wall materials though?

Yeah, will do so in the in-game guide.

About the palisade, I think we should start taking Ytsen’s point in general building tips into account and limit the height to between 3-5? You could possibly add an earthen mound design similar to Helm’s Deep’s dike to the bottom to retain your envisioned height?

The app will be updated with a new design.

Will you make the keep out of mudstone, cobble/limestone or a brick combo similar to Helm’s Deep?

Might be some type of a combo, I haven’t made my mind on this yet. Mudstone and limestone make sense.

Another thing you could do with the layout is to cluster the various professions related to each other. so like a metalworking district, cloths makers, baker street, woodworking in the southern part closer to the forest.

I’d definitely put a market of several stalls at the intersection between the north road and the one up the hill.

Yea, I agree with this. Haven’t really thought about the location of specific stuff yet. But it makes sense to place stuff in realistic/meaning full locations. You do not want the bakery to be in a back alley.

Yes, we need some market stalls and so on.

Maybe also add a meadhall and/or inn around, haven’t seen that in your professions list.

Maybe also add a few (under construction?) buildings outside the gates and a sort of mud pit near the streams where they get building material from?

Yeah, sounds good. What’s between the walls and the farms I do not know yet. But like what you mention could work.

Will you do the whole wool layout, plots, materials and all the stuff in one go or do it in sections like you did Harlond?

The reason why I did it in sections in Harlond was because of the whole size of the city. I do want to layout everything before it opens to everyone. I mean all details, stuff between houses, walls, roads, gates should be done first, signs and information.

I did it this way with Harlond, the two Lossoth villages and Lorien village. It works pretty well, because the desire to help grows expansionary when a village is layout properly.

Why exactly can’t the houses be larger and have more people in them? Surely you can just flatten the terrain to suit?

Well, imo not exactly. Sure, one could dig into the terrain, probably getting rid of hafl the hill in the process and do 20+ blocks long houses. But that would defeat the whole point in having that hill there in the first place.
This was my test for my other idea, I hope it’s apparent enough by the stone that i already cut quite a portion of the hill away to have anything resembling a house and a street at all.

Also looking at actual reconstruction on display in various museums, not every house was 18+ metres long.

Aye fair enough, but I can see in that image that you could definitely make each of those houses at least 2-3 blocks longer.

A block certainly doesn’t feel like a 1mx1m cube when you look at it in-game, so stuff does have to be sized up somewhat.

The thing in that image is, that really is the space I could work with. having a proper at 3 wide road and leaving a small, read 1 block, space between houses and the palisade for defending purposes. And really, if we want to make this a town sitting on a gradual hill, working with the terrain like for example the movie-Edoras does, then I personally only see it working with houses around that size. Any larger and I would have to resort to leveling the whole hill, effectively making two or three terraces hold up by ridiculous retaining walls or palisades. Minecraft just does not have the slopes I can work with in real life, doing my 10+ houses lined street on a hill slope with at most 10% rise in the road.

Could you not terraform the hill into something resembling an Iron Age hillfort? 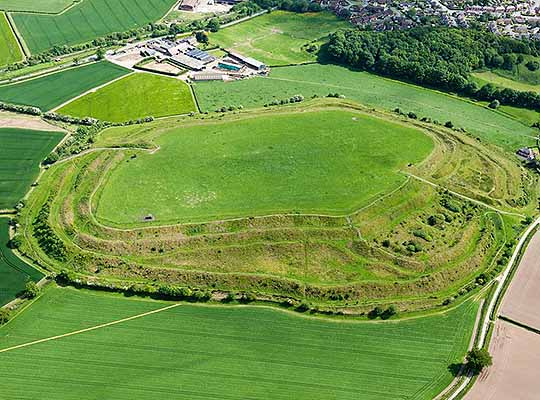 This way the majority could be fairly flat.

I could, if Kemce wants too. But why did you mark the burh on that hill then anyway or shape it the way it is?

Because I didn’t have anything in mind for the burh in particular - I don’t plan layouts for towns in WP.

I think you should definitely terraform the hill to fit your layout. Giving it terrace type layers would give you much better foundations for houses and defences. It isn’t like the beorning Burh3 where its built on a solid piece of resistant rock. Judging by the shape of the hill and its position, it would probably be made from soft sediment and therefore would be easy to shape etc.

I would avoid a stone keep of any sort. Doesn’t really match Rohan, but that’s just my personal opinion. Good application.

It’s a lot shallower since it covers a much wider area. Also, it will be voxeled.

Maybe you could use Alan Lee’s early Edoras designs based on Hrothgar’s Hall as a basis for it, though obviously not as big. The hall itself being separate from the village with a palisade around it. 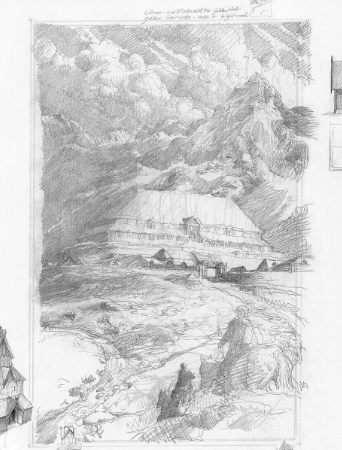 Another thought on the hill fort idea - we know the Rohirrim displaced the Dunlendings from the Westfold, so the backstory for this settlement could be that it was once a Dunlending fort (explaining the more Iron Age-type design).

Well, after thinking about this and looking some stuff up, I have to say nothing in that image and the whole hillfort idea in general does really appeal to me. I know this sounds quite salty and by all means, meme me all you want. But I just don’t want to commit to a project on this scale without being behind it to a great extend, seeing how it easily will take quite a few months, looking at a similar sized project, Burh3. I’m sorry for Kemce that I already leave him this fast, but we talked a bit and I will still most likely build a few plots according to the styleguide.

I personally think the Rohirrim would have improved upon the Dunlendings’ defences a lot throughout time. I must say i like the Iron Age-type design, but i like keeping the steep hill much more.

What I linked isn’t iron age, it’s early Anglo Saxon/Norse, which is over-all very similar to Forn’s first more ruined picture (which you were probably referring to). Evidently the hill can be higher etc. But they’d still terraform it extensively. 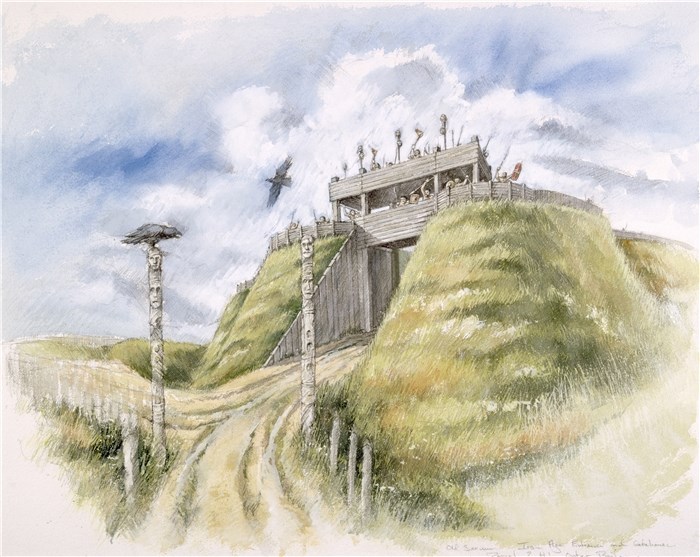 Perhaps these last two shapes appeal to you better, but overall they’d still have a very multi-tiered look, and shape the hill to their own needs.
1 Like
next page →