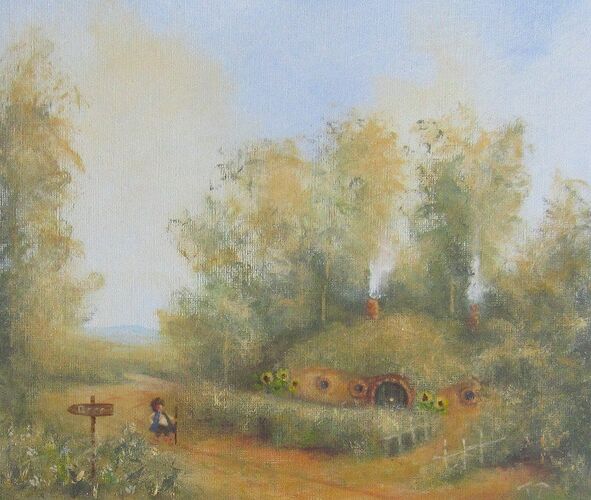 "It was some distance from the Brandywine to Frodo’s new house at Crickhollow. They passed Buck Hill and Brandy Hall on their left, and on the outskirts of Bucklbury struck the main road of Buckland that ran south from the Bridge. Half a mile northward along this they came to a lane opening on their right. This they followed for a couple of miles as it climbed up and down into the country.

At last they came to a narrow gate in a thick hedge. Nothing could be seen of the house in the dark: it stood back from the lane in the middle of a wide circle of lawn surrounded by a belt of low trees inside the outer hedge. Frodo had chosen it, because it stood in an out-of-the-way corner of the country, and there were no other dwellings close by. You could get in and out without being noticed. It had been built a long while before by the BRandybucks, for the use of guests, or members of the family that wished to escape from the crowded life of Brandy Hall for a time. It was an old-fashioned countrified house, as much like a hobbit-hole as possible: it was long and low, with no upper storey; and it had a roof of turf, round windows, and a large round door."

As we’re ploughing on with the last elements of the Shire upgrade, we’ve decided to use Crickhollow as a small, in-house build contest.

There will be no prize for this contest. Only glory.