How did you find out about us? About 3 or 4 years ago a Google search for «Minecraft» and «Middle-earth» finally led me to ArdaCraft.

How old are you? I am an adult.

Where are you from? Valais (Switzerland)

Why do you want to help with this project? The strangely touching depth of Tolkien’s narrative of Middle-earth combined with your careful, loving, complex and thoroughly researched building and landscaping give me enough reason to recognise ArdaCraft as a genuine work of art.
I would be grateful if I could make a modest contribution to it.
So I am applying as an apprentice: with the paths I made on my plot, the Rohan builds (longhouse, Grubenhouse, woodshed), with the brick hobbit house (not the McMansion-Smial) and the brick stable.

Which Tolkien-related works have you read, seen or listened to? Good things first: The Hobbit, the Lord of the Rings trilogy (both in EN and GE), The Adventures of Tom Bombadil and Other Verses from the Red Book, Roverandom, Farmer Giles of Hame, Tree & Leaf (wich I like much), Smith of Wootton Major, The Silmarillion, Unfinished Tales of Numenor and Middle-earth, The Book of Lost Tales I & II , A Secret Vice: Tolkien on Invented Languages, Tolkien On Fairy-stories. I’ve also read the published letters and a lot of positive and negative reviews of his work and own Fonstad’s Atlas of Middle-earth.
I watched all of Peter Jackson’s movies (extended versions), also the Ralph Bakshi animated movie and «The Hunt for Gollum», «Born of Hope» an similiar productions. I even tried to watch the 1980 animated movie and this recently released old russian TV-adaptation and I am not looking forward to the upcoming Amazon-production…

Are there any styles that you excel at? Any styles which you have difficulty with? : I am not an experienced Minecrafter (I first got to know Conquest reforged through Ardacraft…), but I am creative and have some imagination which – unbound - tends to overdoing as I did in my plot (I am sorry).
I like to make paths, I would like to help with Rohan, I would like to build ruins. I am a bit familiar with Rohan buildings, less with Hobbit houses and not at all with the architecture of Elven and Dwarves. I have my problems with diagonal roofs. In short, I have a lot to learn.

Hello! Apologies for any delay in responding. I will be overseeing your application. I will have more time to look over it tonight or tomorrow. I’m on the east coast of the USA, so you may find the differences in time between us may cause me to respond back at different times than you’re used to. Feel free to ask for feedback from any Overseer/Project lead who can attest to being familiar with the styles. I’ll be responding to this post shortly!

Thank you. No need to apologize. I thought I had missed something. Take your time, there’s no rush.

I’ll begin by saying that your application is quite high effort. There’s not been many over the years that put in this much work into a plot. But, considering you’ve been up here for at least a month–I know you’ve put time into it.

That being said, I’ll be posting a screenshot of your build on my Refrigerator there next to the high effort crayon drawings. I feel like your efforts were really misdirected, so I’d like to see us focus those efforts back into learning the basics of each style.

Actually, I lied, I do want to address your Hobbit Hole. It really stands out because it shows you probably improved from building it to your above ground home. If you ever build anything like it on the live map–I will look bad for promoting you to apprentice and I will have no mercy

Right, so I want you to make a Shire house, low class with a detached carpentry shop and a full set of vegetable gardens . I want to see what you can do with that on a separate claimed plot. Do that for me and do it well, and you’ll likely earn apprentice. I look forward to seeing what you can do!

Thank you very much for the kind, detailed, thorough and - as expected - very well founded review. As I wrote in my application: I have a lot to learn… - and already I have learned a lot, this from one of the masters of ArdaCraft.
As for the McMansion… it’s owned by a newly rich Hobbit who made his money - rumor has it - by “trading” tobacco with a buyer far down south… Well, anyway, he’s a very nice fellow to have a drink with, but, as they say, too much money and too little taste. He bought a pretty run-down Smial, ruthlessly tore out everything and started to rebuild, expand and extend, all according to his own ideas and not that he would have a clue about architecture - or about fireplaces.
As for the dwarven mine - well, I thank you for the kind words about the path I built and your intentions with the screenshot of my plot do me credit.
It is true that Minecraft in association with Conquest Reforged is very tempting. Something can be built quickly that looks good at first glance. But to build properly, to build a functional, meaningful building, it just takes more than imagination – a lot more.
In this sense: I will comply with your wish, claim a new plot (thanks :-), research thoroughly, and this time and for all future first think and plan and then build the required hobbit house (low class) with a carpenter’s workshop and extensive vegetable gardens.
I have a lot to do this week, but will get to work towards the weekend. Anyway: I will be back.

I have built the low class hobbit house, the vegetable gardens and a detached carpentry shop. 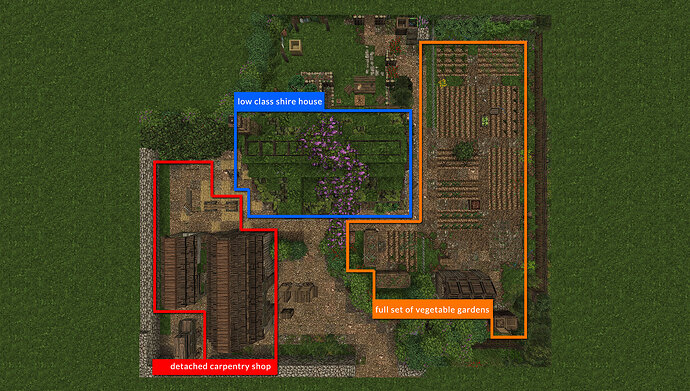 The poor house is located on the edge of the village on a relatively large plot of land, but does not have the acreage necessary to grow enough food for 5 people (2 parents, 11 year old sister, 5 year old twin boys). So father and mother were forced to work as a day laborers until he was hired by a childhood friend to help him with some tobacco trade in the south. With the money earned and an additional interest-free loan from his friend he built a carpentry shop. Business is running very well, the future seems very bright, and they all have already made plans to rebuild the house (and to expand the shop). The mother has stopped working for money. She started to administrate everything financially and in her spare time she’s beautifying the house surroundings (her husband has already built her a new garden shed; the old one has been emptied and its demolition is imminent.) Both have time now to care for the children and so the whole family is happy and that’s the way it must be.

As for the store, I didn’t know what size was wanted, so I created additional variation. Well, in any case, I made an effort, researched, read the guides and searched for carpentry shops throughout Hobbitland and travelled as far as Rohan and to the Beornings…

Whatever, it gave me pleasure and I hope I will meet the requirements this time. But one thing I already know: I am not a gardener.

Well, your special build certainly has its plus and minuses, but the negatives are certainly only limited to quirks of your plot and you wanting to demonstrate your ability to build different types of objects. Between both plots you’ve proven you’re capable of building on the main map as an apprentice. I hope to see continued improvement as we finish up before 1.15, then the game nearly starts over again for us all. Rest our souls.

In order to eventually obtain Builder, please read the guidelines below:
When you build a house in a project and think it is finished, you should post a comment on this application thread with the closest warp and coordinates of your house. Then Builders or Overseers will comment on this thread and give you fair feedback. When you have achieved a standard of building that matches the basic standard of the server, you will be promoted to Builder. This could be on your first build or one further down the line. ArdaCraft is a friendly community that explores the freedom to create and build together. However, when we are dealing with an enormous project like this there are some guidelines we need to follow to make it work. Firstly, always name and date the stuff you build. We have a set of project blocks that we use - you can read about those in the new player guide at ‘/warp spawn’. Secondly, if you are looking for something to help out with, you can type ‘/warp jobs’. This is where you can find all open jobs like building houses or something similar. You will be provided with instructions on how to get to these projects, and what to build once you get there. Thirdly, do not be afraid to ask members for help and get to know us. This is a community project and it’s important to be part of the community! Stay active on Discord and the forums. Make sure to let an Overseer know who you are on Discord so that he can give you the appropriate rank on there.

On a final note, please remember that Apprentice is not a permanent rank, so we require a certain level of activity during your progression. Being active fewer than once a month will result in your application being rejected.

Thank you very much! Good news at the end of the day. I look forward to working with you and learning from you. Thanks again

Scylred’s been pretty active, and has taken on several angled builds of his own accord. I’ve asked him to do a Tharbad ruin, to check his skill in a different style, after which we’ll discuss promotion.

And with that, you are granted the rank of Anciente and Honourable Builder. Congrats!