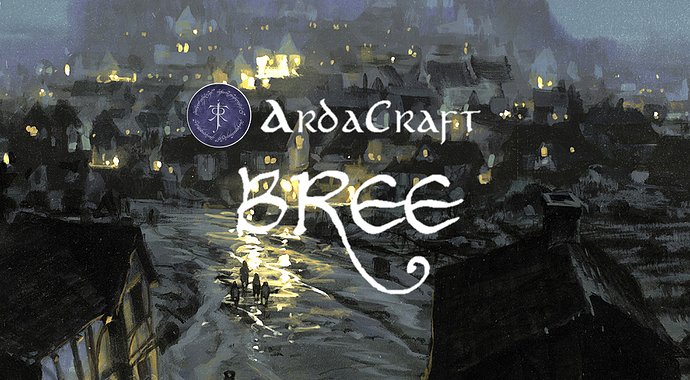 "Bree was the chief village of the Bree-land, a small inhabited region, like an island in the empty lands round about. Besides Bree itself, there was Staddle on the other side of the hill, Combe in a deep valley a little further eastward, and Archet on the edge of the Chetwood. Lying round Bree-hill and the villages was a small country of fields and tamed woodland only a few miles broad.

The Men of Bree were brown-haired, broad, and rather short, cheerful and independent: they belonged to nobody but themselves; but they were more friendly and familiar with Hobbits, Dwarves, Elves, and other inhabitants of the world about them than was (or is) usual with Big People. According to their own tales they were the original inhabitants and were the descendants of the first Men that ever wandered into the West of the middle-world. Few had survived the turmoils of the Elder Days; but when the Kings returned again over the Great Sea they had found the Bree-men still there, and they were still there now, when the memory of the old Kings had faded into the grass."

“[the hobbits of Bree lived] especially on the higher slopes of the hill, above the houses of the Men…

The village of Bree had some hundred stone houses of the Big Folk, mostly above the Road, nestling on the hillside with windows looking west. On that side, running in more than half a circle from the hill and back to it, there was a deep dike with a thick hedge on the inner side. Over this the Road crossed by a causeway; but where it pierced the hedge it was barred by a great gate. There was another gate in the southern comer where the Road ran out of the village. The gates were closed at nightfall; but just inside them were small lodges for the gatekeepers.

Down on the Road, where it swept to the right to go round the foot of the hill, there was a large inn. It had been built long ago when the traffic on the roads had been far greater. For Bree stood at an old meeting of ways; another ancient road crossed the East Road just outside the dike at the western end of the village.

[from the gate] The hobbits rode on up a gentle slope, passing a few detached houses, and drew up outside the inn. The houses looked large and strange to them.” 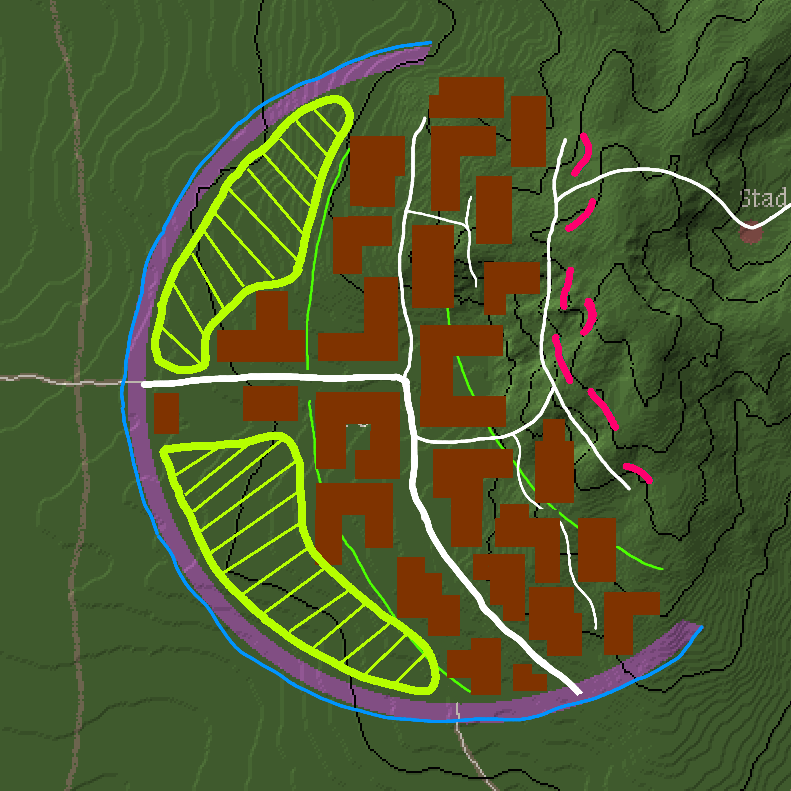 The green lines represent where the hill will be expanded westwards to (the lower line being at y=40 and the higher line being at y=60) light green represents allotments, the pink represents hobbit holes, and the rest is fairly self-explanatory. Quick disclaimer - this plan does not represent the exact size and shape of the houses, only their rough number and placement. I’ve tried to keep at least 60% of the houses above/eastward of the road and I’ll try to keep it that way.

We’ve already made quite a number of concepts for Bree, and I think it would be worth pasting a few screenshots here to show a general idea of what we’re looking for. 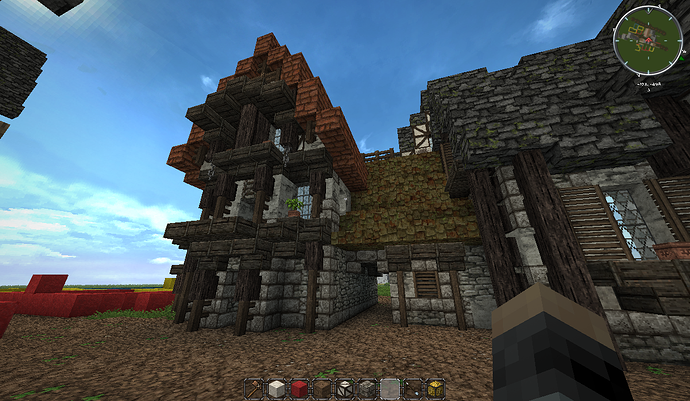 Given how old Bree is (three thousand years by the most conservative estimate) I think it’s important to show a variety of style and material use whilst staying within a certain “theme”. This concept should become clearer as the project progresses, but I think the screenshots above demonstrate it well.

“Lying round Bree-hill and the villages was a small country of fields and tamed woodland only a few miles broad.”

“How Old Toby came by the plant is not recorded, for to his dying day he would not tell. He knew much about herbs, but he was no traveller. It is said that in his youth he went often to Bree, though he certainly never went further from the Shire than that. It is thus quite possible that he learned of this plant in Bree, where now, at any rate, it grows well on the south slopes of the hill.”