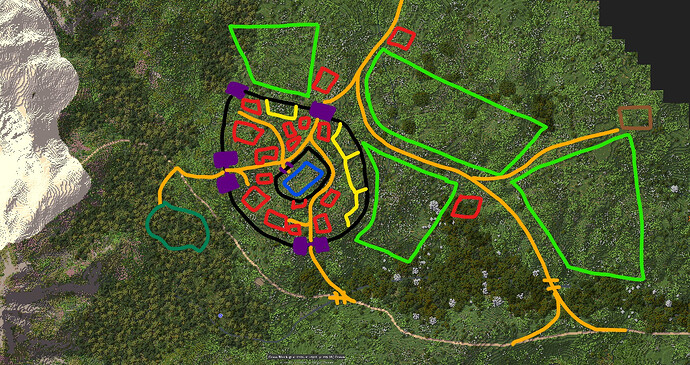 This is the overhead plan that I had put a lot of thought into. The difficulty placing the burh closer to the mountains is the occasional attacks from the goblins, and it would be difficult to defend against the west. I also placed it somewhat on a hill overlooking the main road.

This will be laid out in game too and Glov will look over things before proceeding.

Concepts: Mostly see Glov’s concepts at /warp Beornings. The style is going to be swiss style because of it’s proximity to the mountains, but not as ornate as Glov’s examples at /warp Beornings. The main buildings are going to be a mixture of the swiss style, and the main “rustic” style and will have a character look that is distinct from other projects. However, the burh will have a very defensive quality towards it, and may be a little beat up in places, because this is one of the main protections for the villages and settlements further down the road.

Terrain: Nothing much other than changing the hillside to fit the palisades better and possibly a ditch if possible, but won’t be too upset if that doesn’t work out.

Any suggestions, comments, feedback are appreciated.

Will do. I’ll have an in game guide eventually. I was thinking about having it public although I wasn’t exactly sure it all entailed. I’ll make it open when all of the layouts are complete and if and when the application is accepted.

Again, accepted on the condition that you lay things out completely and get it approved again before beginning building.

ition that you lay things out completely and get it approved again before beginning building.

Burh1 Is open to the public! do /warp burh1 and get started in section 1! It’s surrounded by pink wool! Have fun and follow the guide! Also, I’ve changed it up a little. Interiors should be done along with the exterior of the house. The house won’t be accepted until that is finished!

Orrangejuice is now Co-Leading the project with me. As he has helped plan, helped with ideas, and helped build more than probably even I.

Section 2 is now finished thanks to the successful build day. Section 3 is now opened! I will be with family for the remainder of the holiday, so I won’t be able to be on. If you have questions message me over discord. Feel free to build in section 3.

Beorgburh is offically complete! There is a quarry and a lumber-camp included. Thanks everyone for the tremendous help. Also a side note, by recommendation of @wheellee,I pasted the Old Ford village back into the main map. Hopefully, I can get back into getting that finished in the near future as well. @Glov is also more than welcome to work on it or change anything as it was originally his. Roads to the settlements will be done in the near future too. Hope the announcements helped a little bit. Lovely work so far on the Beorning stuff!