Before you begin reading, I am completely aware that you may want a more experienced builder to do Belegost, and I will respect that decision.

Belegost has generally been described as somewhat of a fortress, which I believe is a reasonable assumption since its strategic position implies that it supervises one of the only passes through Ered Luin and would hence be of great value to whoever held the fortress as they would control trade and traffic between Forlindon (Beleriand at the time) and Eriador.

Unless I was looking at a dodgy web page, it is proposed that the dwarves of Ered Luin had a fortified street aptly named the ‘dwarf-street’ that ran between Mount Dolmed, Nogrod and Belegost. I may have mistaken this for the ‘dwarf-road’ that runs into Forlindon.

However, Belegost was destroyed by the events of the War of Wrath approximately S.A. 40, and most of the remaining dwarves fled to Moria and hence by the time the server is set in Belegost has been abandoned for many thousands of years. Those dwarves that decided to stay at Belegost would have probably died out long ago.

Overhead plan: Taking into consideration that Belegost and Nogrod are supposed to be at the same stage of erosion, i’m probably overthinking the depth required of the overhead plan. Nevertheless; 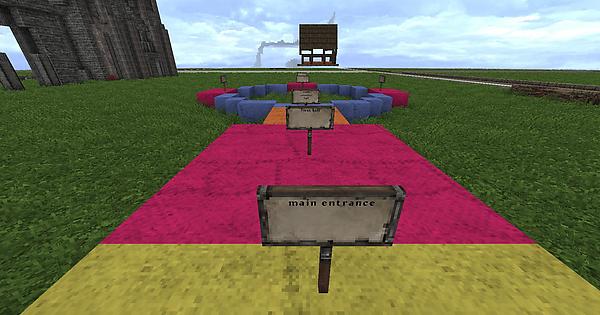 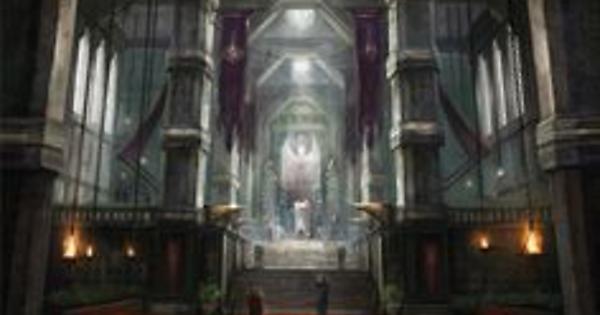 Concept(s): The front gate, ignore the concept on the right. 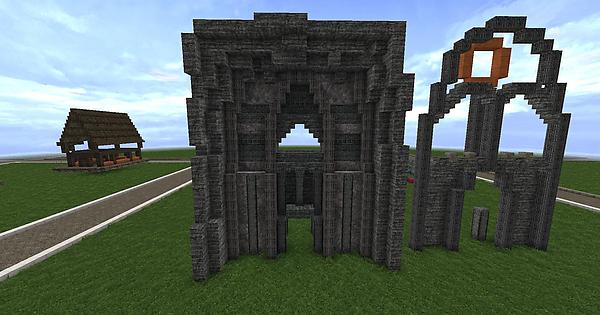 I wrote up more in-depth design ideas just describing some of the factors that I thought would influence the way Belegost was built.

Keep in mind whilst reading the following section, that I probably will go too far in terms of amount of halls proposed to be built with this project, I just like researching this sort of stuff.

As shown by the prior research into the lore, Belegost looked over one of the passes through Ered Luin and would hence control traffic between Forlindon and Eriador. I don’t think it would be unreasonable to suggest that the dwarves of Belegost had built a small watchtower(s) to overlook the pass, much the same way Ravenhill operates for Erebor.

As for Belegost itself I have designed the concept such that it seems a part of the mountain as it is built from the same material, schist, as the mountain is (though it may be good to mix in some rough granite too). The narrow entrance would restrict an army’s capability to simply flood the area with soldiers allowing the dwarves superior defensive capability and knowledge of the fortress to aid them in would-be battle.

I would propose that in addition to the narrow entrance, the hall just beyond the front gate is more or less a prism with a cross-section similar to the shape of the front gate with three pillars each side to hold the ceiling up whilst the walls are lined with levels of balconies useful for both civilian traffic and archer or ballista fire.

Beyond this a small ‘connector hall’ (probably only about 10 blocks long) would connect the first hall mentioned above to a circular hall that would function as a cross-roads, three exits from this hall would lead into the barracks, housing and a large warehouse. The barracks, housing and large warehouse would not be built as the connector halls between them and the circular hall would have most probably collapsed.

Each of the halls mentioned would have debris litter and probably walls or ceiling collapses, remembering that this fortress-city would have endured many thousands of years of erosion, weathering, pillaging etc.

If you find anything that I have missed that would be a good modification/addition please do not hesitate to comment on it.

I think that for Belegost all that’s really needed is a ruined gate. Litterally everything else of the settlement would be completely wiped out.

To a degree I agree with you Guan, a few thousand years of mistreatment and no maintenance would probably do that to a settlement. But I would like to build the proposed entrance hall at least in addition to the front gate so it doesn’t look like a glorified man-built quarry.

I’d love to have ruined halls and stuff aswell. I think with just a really fucked entrance hall you could get away, since Nogrod has one. Tho realistically it shouldn’t have anything. Schist is a very unstable rock type that collapses quickly without maintenance.

Yeah, I was wondering why schist is well used in dwarf builds since it seems to be layers of rock, much like the structure of graphite. Ill be adding some more designs later today for some pillars to hold the ceiling up.

Points about Nogrod when reviewing this:

Yeah I agree with a lot of what you’ve said @Hearthseeker, it had actually never occurred to me that Nogrod is buried, although remembering the layout of the front gate it makes plenty of sense. I’m not too sure about the whole megalithic pillar idea in the center of the first hall, this idea may differ in your mind, but in mine it seems that you would walk through a rather large gate and then be obstructed by a large pillar that would ruin the whole ‘this was once a great city’ effect. I suppose from an aesthetic point of view my original idea was to have a symmetrical hall that would ‘lead’ the eye to the next hall and in doing this have 3 pillars each side and a set of stairs going down to reinforce this effect.

Point 3 raises an interesting idea, the pass leading through the Ered Luin could act as a natural wind tunnel that would definitely wipe away any abandoned structures and this same wind tunnel effect would probably take a toll on Belegost itself if the direction of the wind was from east to west.

Point 4 is very interesting and I would really enjoy doing that, it would add a really mystical aspect to Belegost. Though one of the prerequisites for Belegost was for it too be in a similar state of erosion to Nogrod so i’m not too sure if it will pass, but it is a very interesting concept nonetheless.

Given the fact that the Ered Luin are mostly made of schist, i simply do not think that any halls should exist.

Really looking forward to this being built but just a few thoughts. The point about erosion being the same as Nogrod doesn’t really apply to anything that is inside the settlement. Yes, the condition of the gate should be somewhat similar but any destruction inside is a result of collapses, earthquakes etc that occurred during the war of wrath and that have since occurred over time. This kind of destruction doesn’t need to be uniform across all settlements in the blue mountains since it is more dependent on the pre-existing structure of the rock and any supports built within the halls (varies between each settlement and hall). This being said I think if you want to have a hall that is still partly in-tact then you need to have considerable pillar / arcway supports. Having a small connection to the other hall would be cool and would make it different to Nogrod.
So essentially I think its important that it doesn’t just turn out to be a copy of Nogrod and that this is definitely within the bounds of realism

@Whickery_Dickens I’d like you to take into account the feedback you’ve had, and then produce a new layout.

As requested by @Fornad I will make a new layout taking into account all of the feedback.
Thanks to @Guan, @Hearthseeker and @Oriol for the amazing feedback.

Ok, so I’ve made some progress on the layout v2.0 front. The general idea is to take the feedback from @Hearthseeker and bury the front gate a reasonable way, such that the rubble has begun to enter the 1st hall. Also I have developed two additional plan for the 2nd hall suggested by Hearth, one is an octagonal hall that makes use if this single megalithic pillar idea as it was the only idea that I thought would have the structural capability to hold up the ceiling. From this pillar 8 ribs will connect to each of the 8 corners of the octagon to provide additional support, i think this fulfills @Oriol’s feedback of a would-be second hall requiring additional structural support in order to remain mostly intact.

And of course with respect to @Guan’s feedback, the entrance and first hall will be suitably buggered. Shown in the imgur link below is an image of the front gate where the red paint marks the level of buriedness.

The second plan is to have an ordinary rectangular hall that forms the same general layout as one of the concept arts given in the original post, both ideas are shown below: 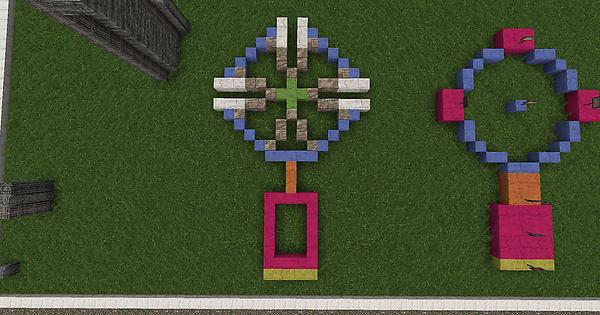 Where, white = entrances/exits, green = pillars, polished granite = structural ribs, blue = hall boundaries. Note, in the rectangular hall, the magenta wool is used to mark the position of a possible statue.

Hopefully this explains the new plan sufficiently, but if i have missed anything let me know.

Looks good to me. Accepted!

What about the west gates of the two cities? Shouldn’t there be some similarly ruined remains of them?

Is there any lore behind the idea? They certainly guarded passes through the range, but I can’t recall seeing any mention of gates on both sides like Moria.

I do remember a quote stating that they delved west entrances to trade with the Elves, but I can’t find it, so I might be wrong.

However, I think it makes sense (it would actually be much more easier and safe to trade with Elves this way, as moutain passes restrict the trade flow and can be dangerous), and I found this quote:

[…] but the Dwarves trafficked into Beleriand,and they made a great road that passed under the shoulders of Mount Dolmed and followed the course of the River Ascar, crossing Gelion at Sarn Athrad, the Ford of Stones, where battle after befell.

It could suggest a common west gate for the two cities, the Dwarven road then splitting under the mountains, going through both of them, exiting eastward and then merging again towards Khazad-dûm.

But where did you get that from?

This is true, but I can’t imagine the volume of trade was that large. The Romans operated an entire empire beyond the Alps and did just fine.

“a great road that passed under the shoulders of Mount Dolmed”

Your conclusions from this are simply wrong. Tolkien uses the word ‘under’ in this context to mean ‘next to but much lower’. This can be seen in ‘The Ring Goes South’:

“‘And it is no good going back while the storm holds,’ said Aragorn. `We have passed no place on the way up that offered more shelter than this cliff-wall we are under now.’”