Lore: After Erebor was taken over by Smaug the Longbeards fled to the Blue Mountains. The Longbeards settled in these mountains and amongst others, dug MineD. The majority of the Dwarven Population lives in the south of the Ered Luin which gave MineD a chance to flourish. More and more dwarves of other tribes moved to this mine and even after the dwarves bravely reconquered Erebor, this mine stayed active. 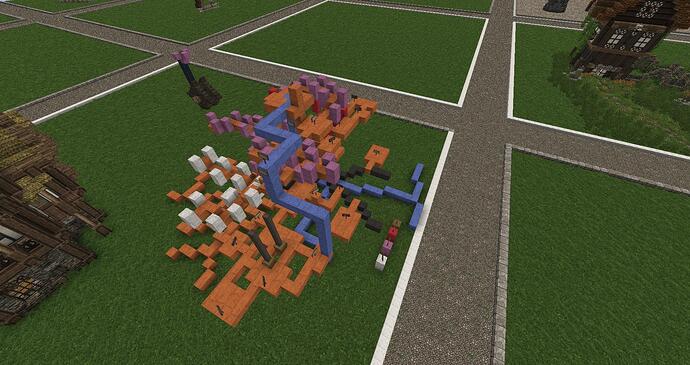 Must say that the layout plan is good, but for such a small settlement the gate is a bit too much. A drawbridge and stuff in probably one of the most peaceful regions in Middle-Earth, where the dwarves litterally have 0 enemies to worry about, is simply not needed.

Overall i think the architecture could use some work aswell, but that’s just my personal taste.

I think the drawbridge is too much as well, but other than that this seems good. Accepted!

I agree with your comments on the drawbridge. It just seems like a cool thing to do since the stream flows past the gate. 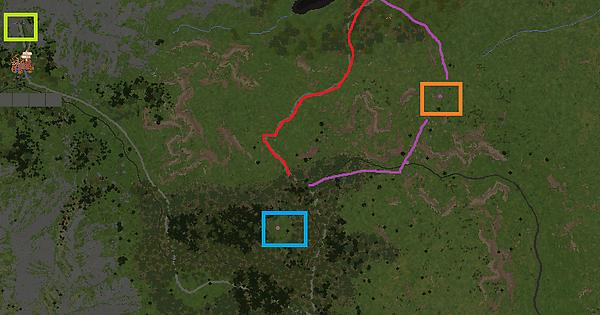 MineD is located at the start of a valley, furtherdown the same valley is MineC, which is now abandoned. Both mines would need both wood and coal and there is a forest not far outside of MineD. The clearing where the marker is now located was already there and would be a perfect fit for a lumbermill supplying MineD with beams etc necessary for the mines. MineD also needs coal. Coal to burn in the homes of the dwarves and for the furnaces as well. The proposed location is in a valley in which mining tunnels can be dug in both sides of the valley.
The road marked in red is the current road. It snakes over the foothills in a weird way. First it goes all the way up the hill and then it goes down again. The proposed road in purple goes along a stream, crosses over this stream and goes a bit uphill to enter the valley in which the coalmine is located. It then continues through a forest and meets up with the road going north. Not only would this road be flatter than the red road, it would pass through the small coalmine. The coalmine would not need a seperate road connecting it to the rest of the roadnetwork and this would also make this coalmine a bit more important, there could be a small inn dug into the hill here for example.

If accepted, I will takes these small things as part of MineD so they will be finished alongside the mine. I look forward to hearing your comments/ideas!

I would have a lumber camp at one of the edges of the forest. Maybe have a small hunting camp too somewhere inside the forest.

The blue marker could indeed be a hunting camp. I planned on having one or two really small hunting camps in the valley itself. Really small means one tent and one campfire.
The lumbercamp could be near the bottom of the mapsection I posted, where the road makes a curve. The problem is that the terrain is quite steep here.

I think the hunting camp would also be where they make their leather, since it would not be very pleasent to the population to do that inside of the settlement. So i’m thinking some semi-permanent wooden shacks and workplaces along with tents.

Could mineB maybe also use the camps and coal mines? It is a small settlement so why not

Great progress on MineD lately!
Sections 1 and 2 are completely claimed and there is only one house left in section 3.
Sections 4 and 5 are now open and there are some cool houses available!

As of now sections 6 and 7 are open. This includes the houses in the diagonal.

Section 8 has opened up as well! There are some really cool professions in this new section, so be sure to claim them quickly.

Great progress on Section 8 this week. Section 9 is now open. At this rate, we can have another build day in a couple of weeks!

I have been on vacation for the past two weeks and because of this progress has stalled.
There are only 4 houses left in Arganzulum and I want to have these finished before moving on to the industry area. Three of these are located in the higher parts of the mine and one is in the street with all the low-class houses.

I ask you to finish/change your houses so we can move on. If you have any questions or are no longer interested in finishing, please PM me on discord.

Time for another update!

All the houses are done and we can now move on to the last parts of Arganzulum. The new hallway, changingrooms, workshops and storage are already done. The forges, cooling chamber and elevator are the only things left. If interested in one of these, please PM me on discord.
I also voxelled the mines and these are now open for decorating. You can work on these halls whenever you want. I will also put a sign in /warp jobs.

Let’s finish these last bits together and we can stripe another dwarven settlement off the list!

Arganzulum is now done! Congrats to @Beathaven and to everyone else who helped with it!