Private or Public: Public, with sub-projects open for application

Research Document
This document contains all the pertinent information regarding research, lore and planning for the land of Anórien. Please read before claiming a settlement.

A N Ó R I E N R E G I O N A L D O C U M E N T “Pippin gazed in growing wonder at the great stone city, vaster and more splendid than anything that he had dreamed of; greater and stronger than Isengard, and far more beautiful.” ... 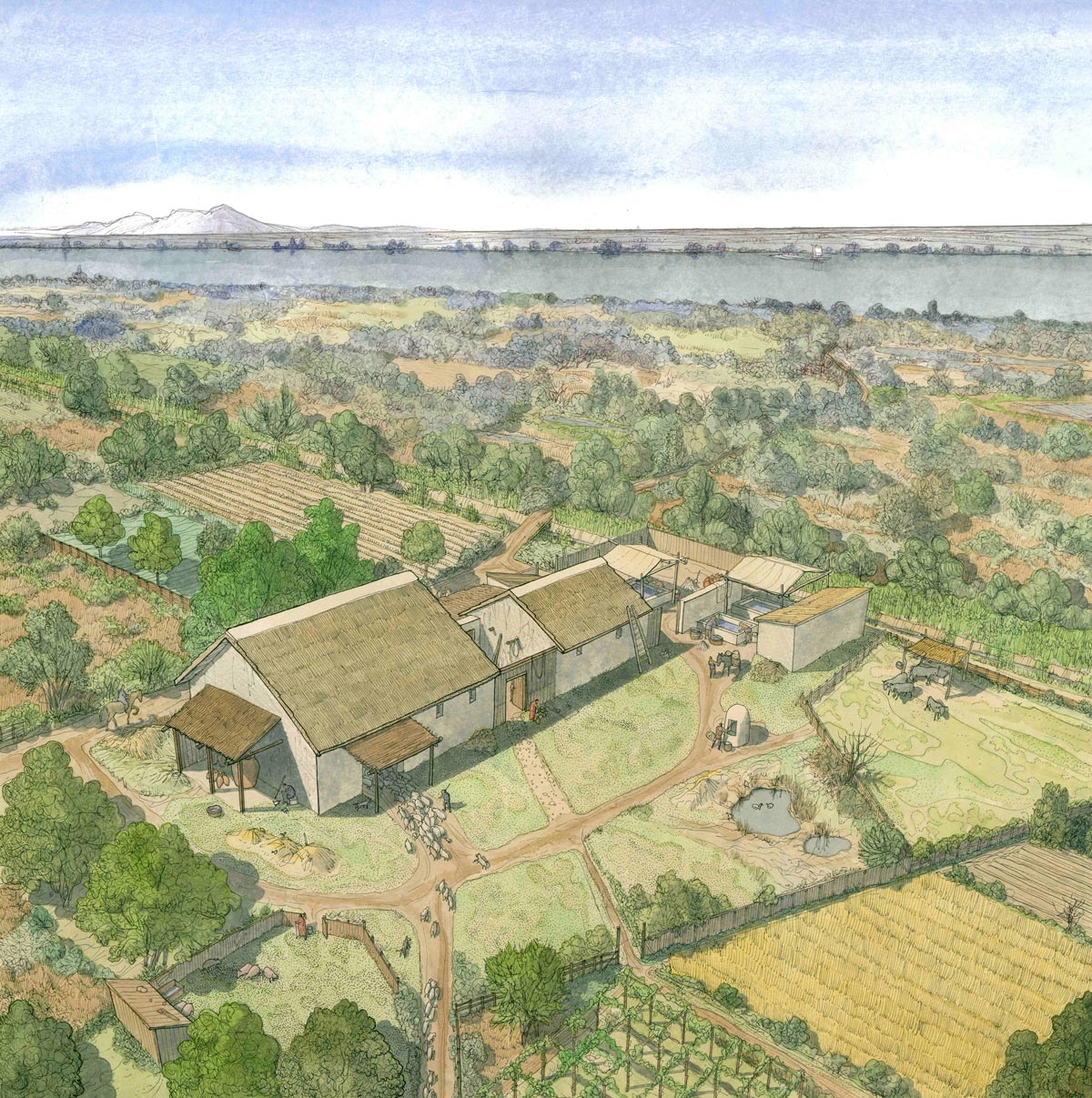 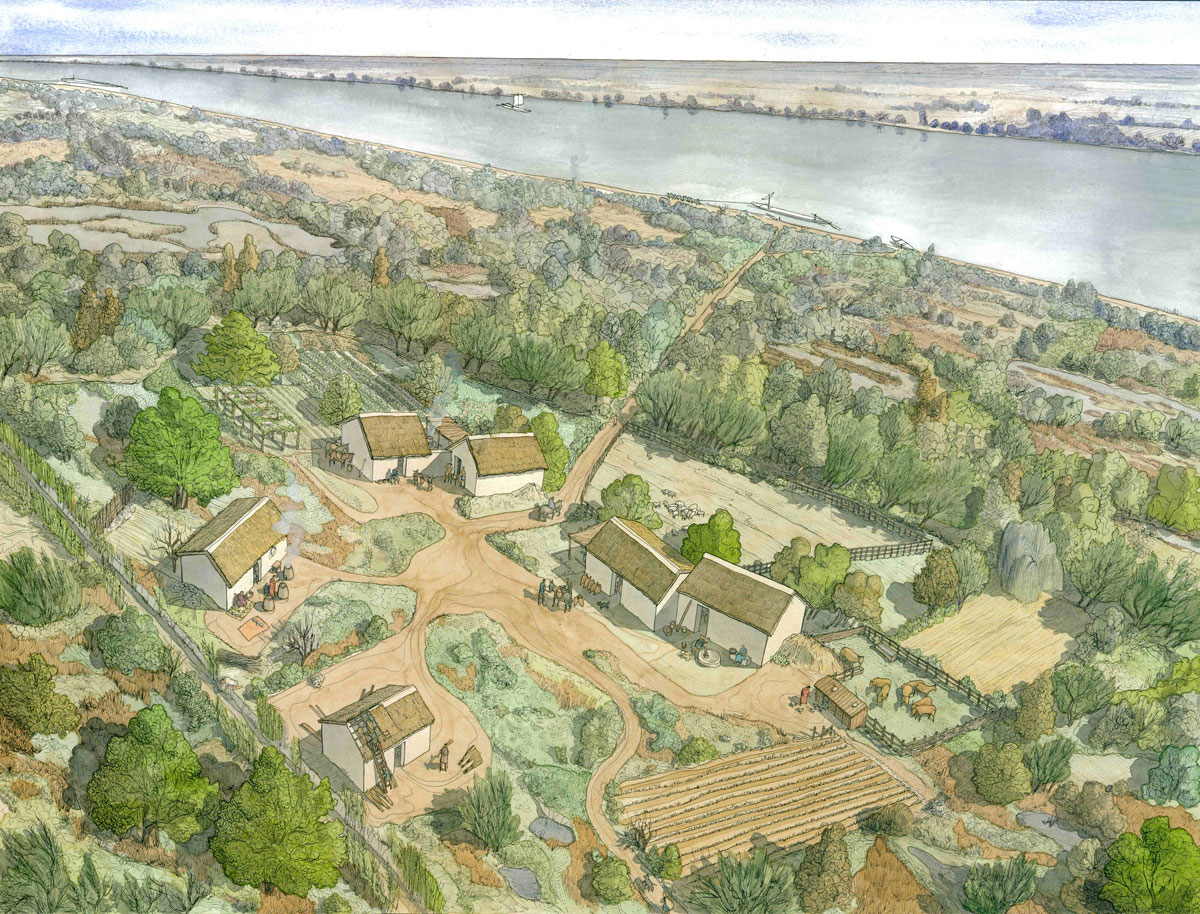 Historical/cultural research:Anórien will mostly draw from Greco-Roman cultures, with elements from other civilizations. An important feature in the two largest towns will be large manor complexes resembling those in ancient Egypt and Crete. The region will also feature some elements connecting it culturally to Rohan, particularly in the smaller settlements. See the Research Document for more information.

Lore: Anórien is the heartland of Gondor, and the region containing its capital of Minas Tirith. Outside of this great fortress, the land is sparsely populated, especially in recent years owing to the growing threat of Mordor. Even those settlements still remaining are in a state of cultural decline, as Faramir states:
“Yet now, if the Rohirrim are grown in some ways more like to us, enhanced in arts and gentleness, we too have become more like to them, and can scarce claim any longer the title High. We are become Middle Men, of the Twilight, but with memory of other things.”
See the Research Document for a more complete account of Anórien’s history. 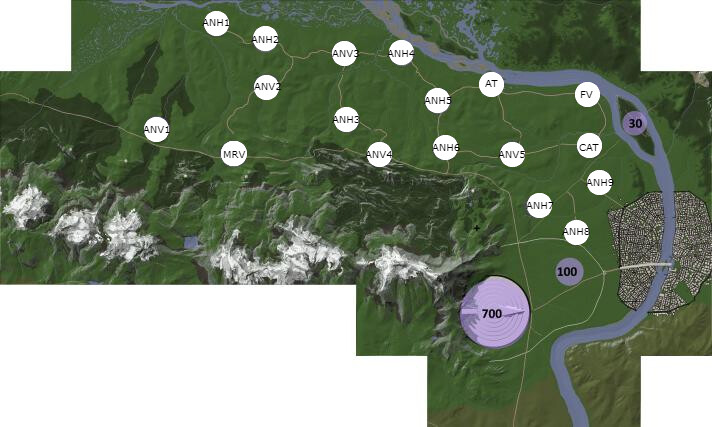 Professions and production: Industries and Produce/Regions Matrix - Google Sheets
Please note that most of these production centers will be found in Minas Tirith. See the Research Document for more information.

Population: Not counting Minas Tirith, Anórien has a total bed count of approximately 1300:

Guides: Will be produced for 1.16 when needed.

Terrain: The terrain for this project is blank/without vegetation. This is because the new map is being worked on separately. When the new map is ready, the settlements, farms and roads will be pasted in.

Sub-projects:
Layouts for these settlements will be made in 1.12, with the actual building stage reserved for the (hopefully soon) release of 1.16. Builders can apply for these locations as per usual, but they’ll only be building the layouts/plots in 1.12.

Minas Tirith and the Pelennor Fields will remain a separate project under @eag_inc and @wheellee.

If you would like to lead any of these locations, please message me on Discord or post below! Anyone leading a location larger than a homestead should post their references/ideas in this thread. 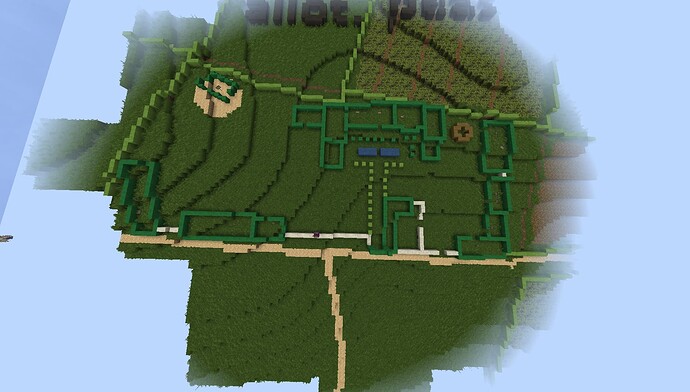 Lore: It was originally built in epoch V, as a larger than average farmhouse, the original house of the owners is still part of the central “mansion” but it has had a number of extensions over time as the compound grew larger and richer.The original building would have been left quite simple and decaying while the additions would have more colorful and well preserved paint

The western side of the compound would be generally older as the stables and barn would have been part of the original layout. These would show a lot more stone than the rest of the villa’s buildings.

The villa itself would have next to no upper class amenities as it was just a “poor” house that was expanded over time. The only real “luxury” would be a bathroom which would be rather rudimentary. 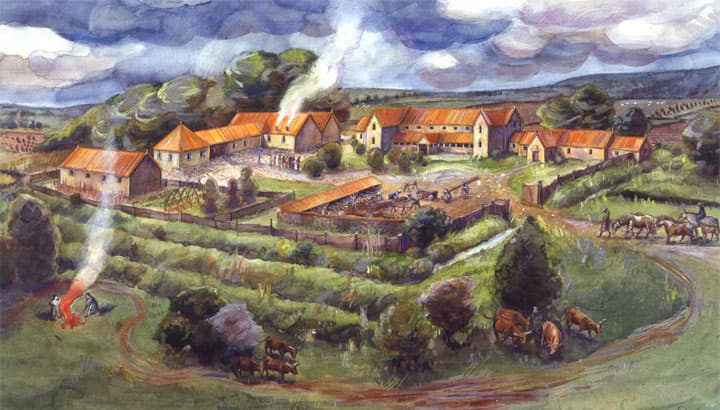 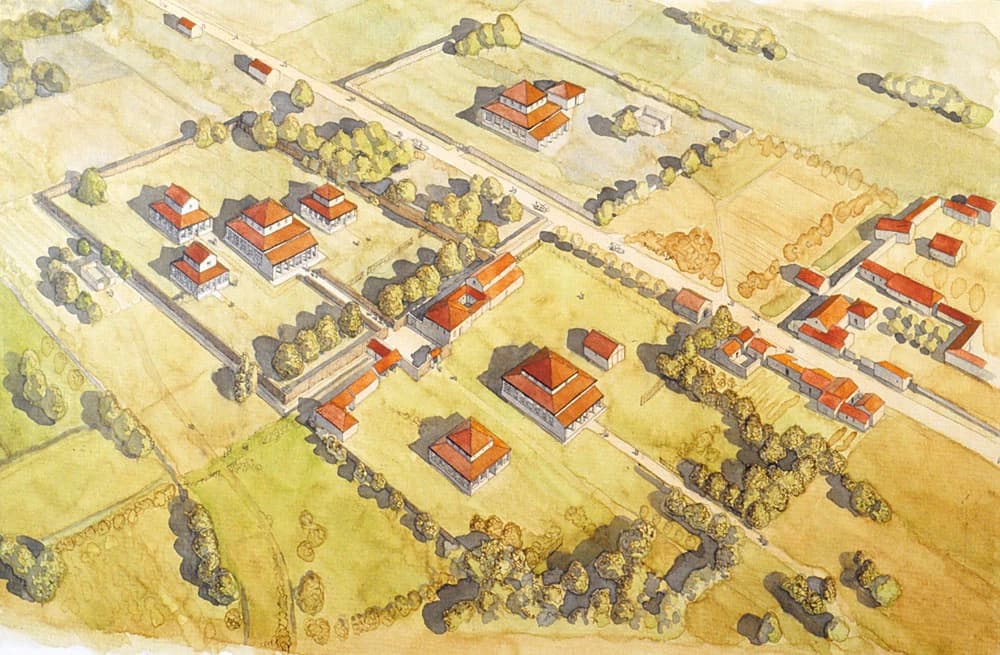 Lore: Given “…tidings had gone out into all parts of Gondor, from Min-Rimmon even to Pinnath Gelin and the far coasts of the sea…” it is assumed anything west of Min-Rimmon is populated by simple herders and farmers who the news doesn’t really effect, ie they’re not going to send people to Minas Tirith for the coronation. The idea is that the Villa was originally built in Epoch IV by a noble family, and further expanded in Epoch V as further family and servants fled the Great Plague. By the time of the server setting, however, it has depopulated, the nobles moving back towards Minas Tirith, and the estate is now overseen by a landowner and a few servants. Rooms that were once used by the noble family have been repurposed to create small ‘family rooms’ the shepherds use as semi-separate housing units.

Country villas often had baths and separate dining halls for summer and winter months, and some of these rooms have been maintained for their original purpose for use by the landowners family and some of the shepherds’ families. There will also be a slightly degraded but still functional hypocaust under many of the original family rooms and bathhouse, another staple of upper class country villas. There will also be a room set aside for the people who maintain the beacon at nearby Calenhad.

Outside of the main villa complex are a few angled buildings, one being a large farmhand dormitory for the folk who work the land. Another large building is for the storage of wool, animal feed and crops, as well as a separate space to process the wool into cloth and (to a lesser extent) clothing. The third smaller building will be for milking (sheep) and cheesemaking.

The formal gardens within the villa will have gone slightly wild but will still be relatively cared for, however the garden to the south of the villa will be a well maintained herb garden. A large chicken yard will also be included, as well as a few sheds for tools and things and a threshing circle (not shown).

Overhead map :
The rooms with white dots are signed to indicate what the rooms original function was. 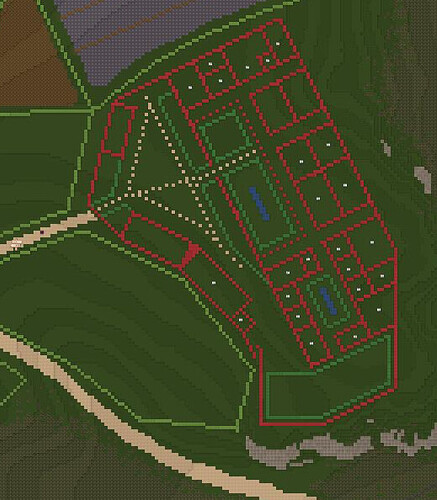 This villa is atypical, being designed from inception to be the grand estate of a wealthy noble set atop a hill with a commanding view of the surrounding lands, with said land being farmed by tenant farmers (Roman coloni) housed on outlying farms (now vanished), rather than a farm that got good. The terrain also accounts for the villa’s overall shape. As I understand it, part of the reason for a noble to live in a country villa was to eschew the traditional city grid styles as a sign of wealth and prosperity. As mentioned its fortunes have fallen over time, so it will not retain the fine decorations from its apex. The original whitewashed plaster exterior will be long gone and not replaced, which I think will give a nice transitional middle ground, i.e. it’ll be Gondorian styled, but with a certain Rohirric lack of skill or care to keep it in peak condition. If it’s functional, it’s fine.

I’m looking at these sort of concepts for the rustic look: 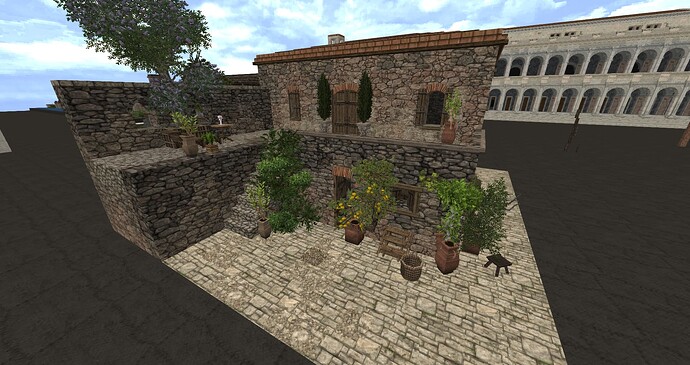 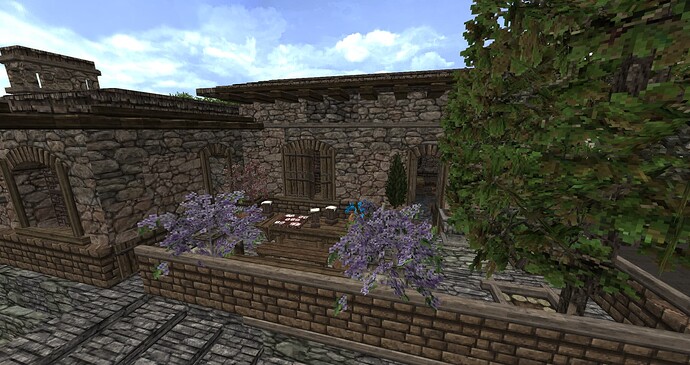 Total population count unknown, depends how the family rooms will be set up, but I can easily hit the 60 required.

-1 to mental health for making it diagonal.

Decent overall, but a few things to improve on:

Please edit your original post, and I’ll review it

Very thorough and well-thought-out! I look forward to seeing the finished product. If you could just label those additional sheds and other buildings, that’d be great.

Also, props for making it a diagonal. I’m sure 1.16 will help the building process.

okay, I have edited it

There are two genera of millet the Romans grew:panicum and setaria. In game they’ll be represented by meadow fescue and maize respectively.

Fornad, a few others and I have agreed to make “teams” of apprentices to finish the homesteads (maybe even villas).The teams would be made out of 2 apprentices and would be assigned by me to specific settlements. I’d provide the apprentices specific inspo images and a sort of list of things that should be built. I will check and give my opinion on what’s being built once a week, taking stuff off the list. Once everything from the list would be done I’d go in and tweak things slightly.
We hope that this will help apprentices get used to building together with others and that it’ll help get the countryside done.

A discord announcement is on its way aswell!

ANH8 is now the intellectual property of @nicholast1112, @Finn01 and @Smial

I am absolutely staggered, by the level of preparation and effort. Terrific work team