Aldburg1592×306 112 KB
History
In 2510 TA Eorl the Young wins the victory of the battle of the Field of Celebrant. As a reward for helping Gondor he and his people are given the region of Calenardhon (Rohan). Aldburg is probably the first place where the Eorlingas settle, and Eorl makes it his seat as the first King of the Mark. At the time of completion it functioned as capital of Rohan. After Eorl’s death the capital is moved to Edoras, where his son Brego builds the Golden Hall.

Aldburg then becomes a lordship and is given to Brego’s third son, Eofor, ancestor of Eomund and Eomer.
In recent times, Eomer ruled from Aldburg. When King Theoden called for his Rohirrim, the riders of the Eastmark mustered in Aldburg and then continued to the Dunharrow.

Speculation
The name Aldburg comes from Old-English and means Old Fortress. Considering this, two assumptions can be made; either there already was an old fortress built when Eorl arrived, or the name of the city changed with time from something else to Aldburg. As there is no lore suggesting the latter, it seems logical that the first must be true. There is however, no lore confirming the first. Aldburg must have been an old Gondorian fortress which was taken / repaired by Eorl. Supporting this is lore stating that both the Hornburg and Isengard are old Gondorian forts. Eorl settled in this fortress and a city formed around it, becoming the capital of Rohan.

Fortress / Citadel
Considering the fortress is Gondorian it will be similar to the Horburg. The fortress will be placed on top of a hill and surrounded by a curtain wall following the shape of the hill. Eorl will have most likely expanded on this existing fort and added a ditch around the base of the hill, if this was not present at the time. The main castle will be built out of stone, but around it wooden, more primitive Rohan-style buildings will be added.

The castle will contain at least:

City
Considering Eorl’s people did not have the means or knowledge to construct out of stone the same way the Gondorians did as evidenced by Edoras, which was built after Aldburg. The city itself will follow the Rohan style and be made out of wood. The city will be surrounded by a wooden palisade and by walls made out of drystone and beams. This palisade will have a dry moat around it and have several gatehouses. One towards the south-east, in the direction of Edoras and one to the north-west, in the direction of the Eastmark, at least. The city will form around the base of the hill, contrary to Edoras. The city itself will contain;

Farms
A large city like this needs extensive fields. Aldburg will have fields all around it in the obviously fertile area between the Entwash, Snowbourn and the Fenmarch. Farms will be all in between Aldburg and Edoras en continue towards the Fenmarch. Lots of potatoes ofcourse!

The middle ward is now open for building!
Claim a piece of land by putting your name on the corresponding projectblock/marker
For interior inspiration i would like to guide you towards Schephurst and POL numbers 1 and 2

The upper ward of aldburg is now open. make sure to look through the guide and the information on the big upper ward sign too.

Nearing completion, only a few things left to do. Claim them in-game! (marked by green screen exlamation marks)

The mill hasn’t been claimed yet. I want a design similar to this 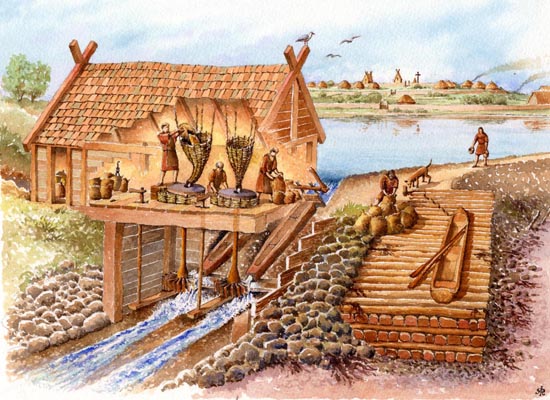 Aldburg is mostly complete, with a last few exceptions.

-The keep needs to be more worn down, with anglo saxon repairs and additions (Guan has some ideas)
-The cemetery will feature an on-going burial, and some rearrangements are made
-The wall of the upper ward will be changed to something more realistic (anglo saxon)
-The gatehouses of the middle and upper ward will be removed and replaced with something more iconic.
-The potter’s workshop and the adjacent homestead need to be completed. Anyone can work on this, no need to ask me. Just detail the area, and think of how the potter’s kilns and workshop ought to look.

Anyone flying or looking around aldburg and noticing other things which are missing that they can’t fix themselves, shoot me a pm on discord.

I got round to finishing the last few things on Aldburg. It now has two new gatehouses, and the outskirts are slightly more detailed. They may receive some more TLC in the future when we’re adding more so called ricks in areas where they’d harvest hay. Thanks to everyone helping out with the project!