As a few of you know by now, we’ve been undergoing ideas for restructuring the server. This thread is for a final discussion in which everyone can chime in if they have some thoughts. A document has been drafted which I’ll paste here. If there are no major objections, then Forn, the Overseers, and Fresh will work at implementing these changes. Thanks for everybody’s input in the temporary server we set up!

A series of changes that address fundamental problems on ArdaCraft in 2021 as we approach critical times on the server. We hope these changes will invigorate the server and redefine certain aspects that have been severely hindering us in recent times.

Admin has traditionally been held by Fornad, and nothing will change in that regard. However a proposition of a new leadership rank in the form of a Steward/Head Overseer rank will help administrate the server more effectively in times when Forn is away and the community is left to run itself. A Steward/Head Overseer rank is distinct from Admin in that it acts more as a representative/figurehead rather than someone with sole power. Having this permission will enable certain problems such as an over-reliance on Fresh for certain technical powers, tiebreakers especially in regards to Overseer promotions/demotions, and having someone to steer the community.

A Steward should never have the authority to act without approval of the other Overseers, and to prevent this from happening is explained in how someone can obtain Steward. Since Overseers themselves are voted in/accepted by the community, they can in turn vote among themselves to choose a Steward. The duration of this position can vary for as long as he can perform his abilities to a high standard, and if he feels there is another in the Overseer team who can carry out the duties of Steward better in the current circumstance, then they may elect a new one. Carrying the role of Steward as a vain title should never be the case, and Overseers should be held accountable to prevent that from happening

In times where Forn can be active, the presiding Steward would simply act as another Overseer, but should still accomplish the same standard of activity/engagement as previously.

As part of the package of proposed changes, Overseer will undergo major transformation. The main priority is to give Overseer more meaning, and become a stronger and more active rank. Since leadership (forn) is prone to inactivity and fluctuation, a more robust Overseer rank will enable the server to lead itself more effectively.

When did you join?:

Which projects have you led?:

Why do you want to apply for Overseer? What do you hope to achieve in your tenure?:

What skills will you bring to the overseer team?:

Are you willing to enlist as a mentor for new apprentices?:

How can an Overseer lose his rank? There is only a vote for promotion to Overseer, not relegation, so inactivity and failure to meet his aims in his original application will lead to the big zucc by forn and/or the Steward and Overseers

When can people apply? Anytime, however Overseers can put applications on hold, or reject if they feel there are too many serving already.

After a few months of experimentation with the Landscaper rank, a few changes are recommended. 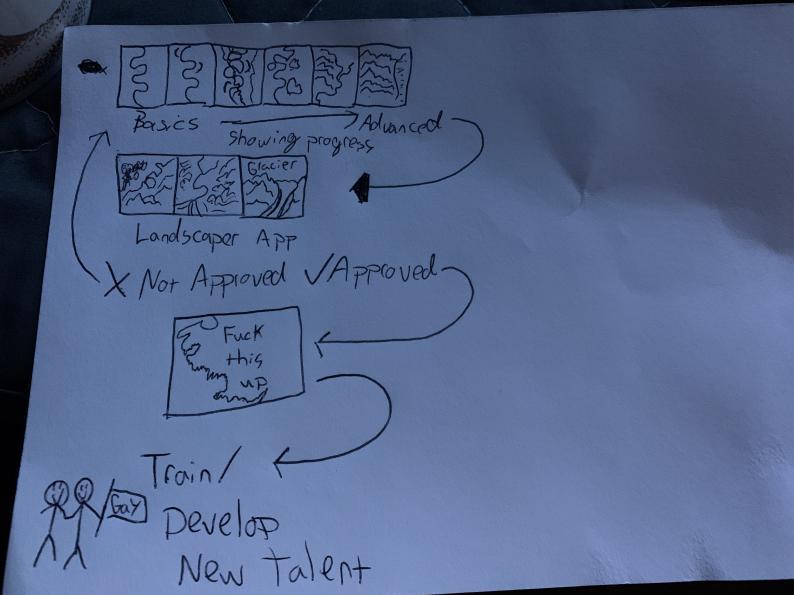 Note: on map, they will likely not be doing 5 rivers for their landscapes. Ideally it would be a themed variety (i.e. every 2 weeks, a choice of 3 landscape locations IRL would be released on the forums/discord, wherein the landscapers can choose something to model off of. This is kind of like the theme build system on MCME, just a little more efficient.)

The project application system is also in need of some changes, especially in comparison to the quality in Gondor project management, this should also extend to other project where applicable.

Below is a new template which will mitigate problems we’ve had in the past with a lack of research/preparation .

Inspiration: [Provide some general information about the inspiration for your project. This can include artwork, sketches, photographs etc,]

Historical/cultural research: [This section should be the most thought out section of your application. Provide examples of research and information regarding the cultures/historical material your project is drawing from. Provide a reasonable degree of information for all relevant aspects, such as urban/rural layouts, architecture, agriculture, hard and soft infrastructure, trade & commerce etc.]

Lore: [All lore relevant to this location to go here. The bulk of this should be quotes from the books, though drawings by Tolkien should also be included if they exist. http://www.henneth-annun.net/ is a great place to start, though be warned: there are infrequent inaccuracies and omissions on there, so it’s always best to go directly to the book.]

Overhead map: [This can either be made in a third-party program(with a screenshot of the dynmap/journeymap as a base), or as a plan in Minecraft itself (made from wool blocks or something similar). This plan should be labelled with the various buildings and features, and should be well thought-out, with reference to the research document relating to the area. The more detail you include, the more likely it is that your application will be accepted.]

Professions and production: [Include in this section your plans (based on your research) which professions you’ll be including, as well as the larger production, commercial system, industries etc.]

Population: [The rough number of beds you expect to place in this build.]

Guides: [This is where you reference all the necessary guides (and their warps!) that relate to your project. The primary guide for your project should be an in-game guide (or via google docs) of your house/build style. Simple and thorough steps should be shown in your guide to help other builders/apprentices/applicants understand how to effectively replicate it. If it’s a town, show examples for different classes, what changes, what to include or avoid etc. A general block-palette should also be a part of your in-game guide. Additionally, provide the warps to any other external guides such as the gradient guide, that relate to your project.]

In-game concepts: [Show images of your concepts that you have made to test different aspects of your project. For a settlement this might be concepts of the walls or defenses if there are any, a row of houses etc.]

Models: [If relevant, provide a mini-model of your settlement. These are small-scale model replications of your settlements that provide an easy in-game overview of what it will roughly look like. You can detail these with the palette you intend to utilize, and include any features that you intend your final product to have.]

Terrain: [If your project has terrain-related work, provide information on what is required, what it will look like, how much there is etc. Include these tasks in the above planning stages if necessary.]

Sub-projects: [If your project encompasses a broader region, make a list of any sub-projects that are to be led and applied for by other builders. Make this list easily understandable and obvious - and be sure to update it as your project progresses and sub-projects are claimed/completed!]

Another significant change will be to push the server’s outreach and create a larger presence in the LOTR community. The following steps will be taken to achieve this:

Events: We’ve been doing more events and it’s paid off already, people enjoy them and they drag the focus a little more towards our community instead of purely focussing on building and server progress, the trick will be to find the balance between these two. We’re gonna need a team of people who will help me [Fruit] host and make these events, e.g. working out a new game and preparing stuff in game. The new options to change gamemode and fire projectiles opened up huge possibilities for new games and new features in existing games like Nazgul & Hobbits, in the future we might add more options like spawn eggs or plugins to give us even more possibilities but we’ll stick to what we have for now.

Build Days: We should have more regular build days, however, just like with the events we’re gonna have to find the balance, build days are usually very productive but can also be a reason to not come online if you don’t like building in the region. This problem can partly be countered by having a ‘reward’ at the end, i.e. an event or meeting, or making the build day itself more fun by having ‘game breaks’ in between where you’d stop the build day for ~30 mins and play a mini-game with the people online, these can either be announced beforehand or the project lead could start them randomly during the build day to make sure people don’t come online just to participate in the mini-game and then go offline again.

Environment: We’ve all agreed our ways of communicating might be a bit too toxic in some cases, we want to be viewed as a friendly community by other servers, which will give us more guests and applications as well, and thus there are a few changes to be made.

In-game server channels: Similar to the Discord channel we need in-game channels for the same reasons, however, this builder-only channel should not result in builders only talking in that channel, if we did the server would seem dead and less welcoming to guests/apprentices. The new channel should be a secondary channel which we only use for the purpose it’s created for.