Where are you from? :USA

Why do you want to help with this project? : I enjoy minecraft and I enjoy Tolkien so I figured why not combine the things I enjoy and help here.

Which Tolkien-related works have you read, seen or listened to? : All the movies, LOTR books, The Hobbit, The Silmarillion, Beren & Luthien 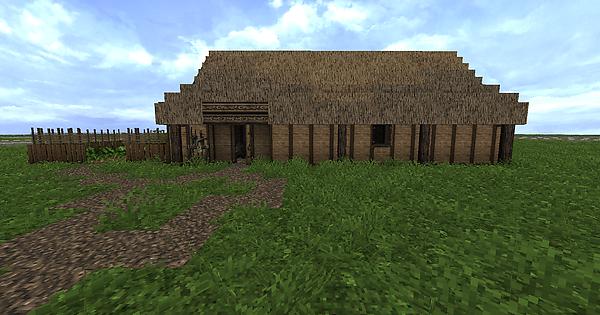 Are there any styles that you excel at? Any styles which you have difficulty with? : Dont believe so, havent tried yet

Hey Crusher, welcome and thank you for applying.

I had a look at your plot and it seems you have a pretty decent grasp of how to build a Rohan folde style house. You even did a decent job on the roof gradient which is quite rare to see on a first time build. I do however have a few points of feedback I would like to see you apply on your build:

I hope this feedback is of some help, and I would like to see you apply it to your build in-game. let me know when you’re done doing so, and if you’ve managed to apply it well we’ll try a second application build in a different style.

Thank you for the advice, I did what you asked for the roof, beds and north side of the house, I removed the carved wood because I couldn’t find any good way of adding supports. Also the plot next time mine, the one with the water is also mine and its supposed to be like Lake town, was wondering if you could give me a few pointers if you have the time. My first attempt I messed up the height of all the buildings.

Feedback was applied well enough, so I think we can move on to the next build for the application. For your second build, I would like you to build a middle-class hobbit bakery where 3 people live, in any Southfarthing or Westfarthing style.

Good luck! Let me know when you’re done by either messaging me in-game or on Discord.

Further communication was done over Discord and in-game. Crusher has built the Hobbit bakery, another low class hobbit house and a Tharbad ruin on his plots. While the Hobbit builds required some improvement, and you still have some to learn in this style and the following of guides, we think your tharbad ruins and rohan house show enough potential to justify promoting you to Apprentice.

So congratulations, you’re hereby promoted to Apprentice. I will however ask you to limit yourself to one build at a time untill it’s approved.

In order to eventually obtain Builder, please read the guidelines below: When you build a house in a project and think it is finished, you should add an ‘Awaiting Approval’ block above your build. The project leader will assess your build and give you fair feedback, asking you to update your build, or approving it. When your building is approved, you may add it to this thread, stating what your build was, which project it is a part of, and its coordinates (X,Z).
For example:
Upper class hobbit home, Longbottom. Coords: -1328, 408

When you have achieved a standard of building that matches the basic standard of the server, you will be promoted to Builder. This requires you to build at least 5 buildings in differing styles, for example two hobbit houses, two Tharbad ruins and a Rohan home. ArdaCraft is a friendly community that explores the freedom to create and build together. However, when we are dealing with an enormous project like this there are some guidelines we need to follow to make it work. Firstly, always name and date the stuff you build. We have a set of project blocks that we use - you can read about those in the new player guide at ‘/warp spawn’. Secondly, if you are looking for something to help out with, you can type ‘/warp jobs’. This is where you can find all open jobs like building houses or something similar. You will be provided with instructions on how to get to these projects, and what to build once you get there. Thirdly, do not be afraid to ask members for help and get to know us. This is a community project and it’s important to be part of the community! Stay active on Discord and the forums. Make sure to let an Overseer know who you are on Discord so that he can give you the appropriate rank on there. On a final note, please remember that Apprentice is not a permanent rank, so we require a certain level of activity during your progression. Being active fewer than once a month will result in your application being rejected.